A Short History of the Saracens 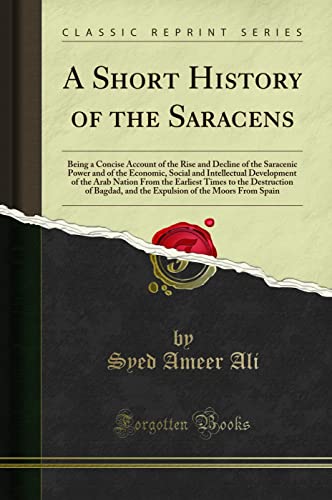 A Short History of the Saracens by Syed Ameer Ali covers the major areas of medieval Islamic history and is highly recommend to anyone seeking to expand their knowledge-base in Islamic history. Although the book has some issues and suffers in terms of overall neutrality, it is a worthwhile addition to an Islamic history reading list.

Syed Ameer Ali's account of the rise of Muslim Arabs is a tantalizing read, to say the least, every page made we want to read it further, and although some phrases got a bit repetitive by the end and sometimes the narrative was convoluted, overall, the book impressed me thoroughly. It gives a summary of most major events that molded the history of the Muslim Arab Empire following the death of the Islamic Prophet Muhammad in 632 CE.

The book covers the major areas of medieval Islamic history such as:

The book ends its main narrative with the fall of Baghdad in 1258 CE and its brief aftermath but continues a side story of Muslim Spain, which ends with the loss of their last foothold in the Iberian Peninsula in 1492 CE.

Throughout the book, the author delivers insights into the perspectives of Muslim and pro-Muslim historians preceding him, which, although not good for overall neutrality, is still useful in counterbalancing the Eurocentric narrative of several other writers. Although the author is descended from a Shi'ite family, he tries to remain impartial in that regard and so the book is highly recommended to anyone seeking a near-neutral narrative from within the pool of Muslim historians.

While the book is mostly neutral from a Sunni/Shia perspective, it does suffer in terms of overall neutrality.

The book delivers excellently overall but does suffer in some areas. Most notably, the historian uses outdated numbers when referring to the strength of armies in battle, often exaggerating them to unrealistic levels, although in his defense, it was not until much later that historians developed more realistic estimates in this matter. So, when you read the number 100,000, just double-check for a moderate estimate to get a better picture. It also gets very complicated and hard to follow at some points but a re-read of the said sections can help clear up the facts.

Moreover, while it is mostly neutral from a Sunni/Shia perspective, it does suffer in terms of overall neutrality. This is excellently reflected in the section detailing the events of the Middle East Crusades, especially when the historian refers to the actions of the Latin Crusaders during the whole era. However, considering that these sentiments came from a person living at the time of European colonialism, it is not surprising.

Overall, I would say that this book is a "must-read" if you have already read some other books on Islamic history. I would not recommend it as your first read in this niche, but once you have got an idea about the history of Islam, it will be a worthwhile addition to your reading list. Despite its limitations, the book does deliver its narrative excellently and in an unforgettable manner.

$36.81
free shipping worldwide
$39.57
plus shipping
By purchasing books through this website, you support our non-profit organization. World History Encyclopedia receives a small commission for each book sold through our affiliate partners.

Caliphate (“Khilafat” in Arabic) was a semi-religious political...
Definition

The Abbasids were an Arabic dynasty that initially ruled over most...
Definition

$36.81
free shipping worldwide
$39.57
plus shipping
By purchasing books through this website, you support our non-profit organization. World History Encyclopedia receives a small commission for each book sold through our affiliate partners.