by Mark Cartwright
published on 29 March 2017 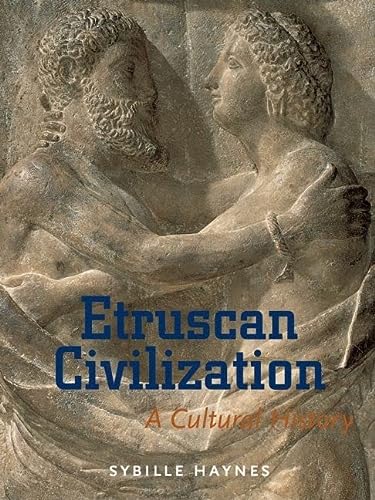 Sybille Haynes has here produced a comprehensive chronological study of the Etruscans which fills many gaps in the available literature on Italy's first great civilization. Its depth and scope combined with hundreds of images will relegate all other works on this topic to a quiet life at the back of the bookshelf.

The Etruscans have long been a neglected civilization of the ancient Mediterranean and reading this book you will wonder how on earth that situation was ever allowed to come about. Sybille Haynes has compiled the single most comprehensive overview of Etruscan history currently available, and her richly illustrated book easily sets the Etruscans where they belong: as a key foundation block to Western civilization as we know it today. History lovers are quite used to books describing how the Greeks invented everything and the Romans adapted and made even better all that the Greeks had provided them with, but here we have a more complex story of the man in the middle, as it were, the missing link between those two great cultures.

Etruscan Civilization - A Cultural History, to give its full title, runs at over 400 glossy pages of history covering six or seven crucial centuries of Italy's development. The title is perhaps a little misleading as that history is presented in chronological sequence divided into the major epochs of Villanovan, Orientalising, Archaic, Classical, and Hellenistic periods. Each period is further divided into sections which deal with such fundamentals as burials, art, and architecture. Religion, warfare, and trade are also discussed, in fact, everything that could possibly be covered is covered, but it might have been an idea to present by topic rather than by chronology. Certainly, it would have made the reading more interesting for the general reader who will read from start to finish. As a result, the presentation favours the student/scholar approach of dipping into the book for specific information at particular times. This approach is further aided by an extensive bibliography divided by topic and an excellent index.

Apart from the fact that information on specific topics is split into the different parts of the book depending on the time period, the other minor weakness is a lack of focus on the relations between Rome and the Etruscan cities. This criticism may be a little unfair as it can easily be applied to every other book written on the Etruscans, but I imagine most readers will want to see the culture in context with its more famous neighbour. What information is available to us is present but it is one topic that suffers more than most from the chronological approach of the book and so the reader has to stitch together various passages from different chapters to complete the story, already a patchy and confusing one.

Make no mistake, though, this is a very fine book, written with great care, attention to detail, and love of the subject. Areas which stand out as being covered with exceptional skill are the religious practices of the Etruscans and their gods; their tomb architecture, which evolved significantly over the centuries; the famous and less well-known wall paintings - their aesthetics and significance both in iconography and importance to our understanding of Etruscan culture; pottery and minor arts from bronze figurines to engraved mirrors; and the individual Etruscan cities and towns, their development and interaction with each other and the wider Mediterranean.

Prior to the 20th century CE, and probably still today to some degree, the Etruscans were thought of as the poor relations of the great cultures of the West. They copied the Greeks and did so rather badly, then the Romans came along and showed how useless they were at defending a culture that nobody would miss anyway. This book corrects those misguided views with overwhelming and compelling evidence. One really is left with a feeling of regret that the Romans so efficiently erased the history of a culture to which they owed so much. Sybille Haynes has considerably helped restore the Etruscans to the position in history they deserve.

$44.98
free shipping worldwide
$50.00
plus shipping
By purchasing books through this website, you support our non-profit organization. World History Encyclopedia receives a small commission for each book sold through our affiliate partners.

The Etruscan civilization, which flourished in central Italy from...
Definition

The architecture of the Etruscan civilization, which flourished...

$44.98
free shipping worldwide
$50.00
plus shipping
By purchasing books through this website, you support our non-profit organization. World History Encyclopedia receives a small commission for each book sold through our affiliate partners.