Running a website with millions of readers every month is expensive. Not only do we pay for our servers, but also for related services such as our content delivery network, Google Workspace, email, and much more. We would much rather spend this money on producing more free history content for the world. Thank you for your help!
$395 / $21000
❤ Donate

by Jessica Settergren
published on 30 April 2016 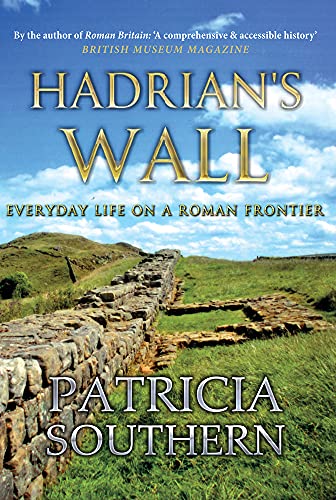 Patricia Southern's writing breathes wit and entertainment into her treatment of Hadrian's Wall. Hadrian's Wall: Everyday Life on a Roman Frontier could easily have been yet another dry interpretation of the archaeological and historical data about the ruins. Instead, Southern takes every aspect of the Wall's historical supposition to task, examining current science and generally accepted conclusions with a sense of healthy self-deprecation. “None of this speculation is supported by any evidence, but somebody had to do it.” (88)

Hadrian's Wall discusses everything relating to the structure, not just the Wall itself. The first half of the book is devoted to reasons why the Wall was built, including an extensively detailed chapter on Hadrian's exposure to frontiers during his rise to Emperor, and how those postings may have influenced his decisions. Southern covers all the practicalities of the construction, how the Legions built such a structure (including a list of the trade expertise generally found in a typical Legion in the 120s CE), when construction must have started, who was in charge of supplies, why some areas were built in turf while others were stone, and what might have happened with the older systems of forts South of the Wall. She does not shy away from the effect the Wall had on Britons at the time either, discussing difficulties the Romans had with local tribes during construction and the possibility one tribe's territory was actually split by the wall.

The second half covers how the Wall was really used at its height, as well as the withdrawal of Romans from the frontier and eventually Britain. Of particular interest is her explanation of life along the Wall. The chapter “Living on the Wall” details every possible aspect of a soldier's posting at the Wall, including military policies and procedures, a soldier's kit and weaponry, expected terms of service and retirement, auxiliary service, and civilians living nearby. It's an excellent, well-rounded snapshot of what life must have been like serving on the frontier.

Chapters eight and nine cover the Wall from the 3rd century CE through the end of Rome's occupation in Britain. Here, she reviews the myriad of political and social changes affecting the structure. Southern includes political climate, recruitment and military changes, and the later influences of Constantine's conversion to Christianity in her analysis.

Hadrian's Wall concludes with a chapter devoted to investigating how the Wall actually worked. Southern fully admits there are holes in the history and archaeology which cannot be answered. “There are too many imponderables for anyone to be pedantic about how the Wall functioned at any period of its long history.” (361) She discusses many of the unanswered questions such as what was the enemy really like at the time (was a firm barrier necessary, or was it a political show), was there a walk on the top of the wall or not, and what happened when the Romans left versus when the Wall actually fell out of use.

Southern grew up close to the Wall and has clearly been fascinated by it since childhood. Her passion is evident, as is her sense of humor. Anyone who ends a necessary-but-dry discussion of timing with “This sentence invites incredulous mutterings about porcine aviation” (88) definitely has my attention and appreciation. In general, Southern's writing style is extremely accessible to anyone interested in the topic: no Ph.D. required. This is a well-written, interesting book about not only the structure itself but the legends and archaeological evidence behind it.

$29.87
plus shipping
By purchasing books through this website, you support our non-profit organization. World History Encyclopedia receives a small commission for each book sold through our affiliate partners.

The 1,900th anniversary of the visit of the Roman emperor Hadrian...
Definition

Hadrian's Wall (known in antiquity as the Vallum Hadriani or the...

$29.87
plus shipping
By purchasing books through this website, you support our non-profit organization. World History Encyclopedia receives a small commission for each book sold through our affiliate partners.