Written by a former Greek slave, in the late to mid-6th century BCE, Aesop's Fables are the world's best known collection of morality tales. The fables, numbering 725, were originally told from person-to-person as much for entertainment purposes but largely as a means for relaying or teaching a moral or lesson. These early stories are essentially allegorical myths often portraying animals or insects e.g. foxes, grasshoppers, frogs, cats, dogs, ants, crabs, stags, and monkeys representing humans engaged in human-like situations (a belief known as animism). Ultimately the fables represent one of the oldest characteristics of human life: storytelling.

The origins of the fables pre-date the Greeks. Sumerian proverbs, written some 1,500 years before Christ, share similar characteristics and structure as the later Greek fables. The Sumerian proverbs included an animal character and often contained some practical piece of advice for living (“You should not boast; then your words will be trusted”). The writing style of both the earlier proverbs and the later fables were simple and direct. Neither contains many words. The situations re-counted in the stories begin with some type of incident and conclude with a punch line which would transform into the oft-recognized moral of the tale. It is much later that writers would begin to include the moral either at the beginning of the story (designed to tell the reader the purpose of the tale upfront) or was added to the end (to instruct the reader what the story was supposed to teach). Ultimately, the fables are designed to highlight both desired and undesirable human behaviors: what to do or what not to do.

Fables are designed to highlight both desired and undesirable human behaviors: what to do or what not to do.

The fables, written down in Greek between the 10th-16th centuries CE, may not be recorded in the exact words as when they were first told. Over time, and largely due to the numerous times the stories were re-told, words may have been changed or eliminated in order to fit the storyteller's purpose. Despite these changes, one characteristic that most of the fables share is the role of animals in the stories. The animals display human-like qualities, especially the characteristics of speech and behavior. In effect, the stories are designed to mimic human life. Most of the stories/fables are meant to highlight bad or poor human decisions and behaviors. In order to allow the animals to appear in multiple tales and roles, Aesop did not restrict the animals to behaving in a manner generally associated with that particular animal e.g. the cunning fox, the slow turtle. These looser characterizations allow for the animals to appear in other settings acting in different manners.

Often the focus of Greek learning, especially regarding instruction for children in reading and writing, Aesop's Fables served a multitude of additional purposes. Politically, the fables emerged in a time period of Greek history when authoritarian rule often made free & open speech dangerous for the speaker. The fables served as a means by which criticisms against the government could be expressed without fear of punishment. In effect, the stories served as a code by which the weak and powerless could speak out against the strong and powerful.

Follow us on Youtube!
The subversive nature of the tales allowed the lower classes in Greek society a means of escape from a society.

Additionally, the stories served to remind the weak that being clever could provide a means by which they could succeed against the powerful. The subversive nature of the tales allowed the lower classes in Greek society a means of escape from a society which was often oriented around the idea that “might makes right.” The fables were also considered as a valuable tool in speeches especially as a means to persuade others about a specific point. Aristotle, in his Rhetoric, argued that in the absence of any concrete evidence for proving one's point that a fable could just as well support one's argument.

The fables served as a form of children's' entertainment beyond being a simple teaching tool. The fables transmitted important life lessons while also describing the “world of childhood.” The primary characters often acted in a child-like manner. The stories described the challenges of adulthood thus allowing young readers to engage with the characters and morals of adulthood at an early age.

The stories also provided an opportunity for a measure of self-reflection. At those moments when Greeks suspected their culture or civilization was not living up to expectations, the fables provided an opportunity for a degree of self-reflection. Although humans and animals share similar traits, humans are different due to their power of reason which allows humans to make different choices about life and living.

The Serpent & the Eagle

An Eagle swooped down upon a Serpent and seized it in his talons with the intention of carrying it off and devouring it. But the Serpent was too quick for him and had its coils round him in a moment; and then there ensued a life-and-death struggle between the two. A countryman, who was a witness of the encounter, came to the assistance of the eagle, and succeeded in freeing him from the Serpent and enabling him to escape. In revenge, the Serpent spat some of his poison into the man's drinking-horn. Heated with his exertions, the man was about to slake his thirst with a draught from the horn, when the Eagle knocked it out of his hand, and spilled its contents upon the ground.

Moral: One good turn deserves another.

A groom used to spend whole days in currycombing and rubbing down his Horse, but at the same time stole his oats and sold them for his own profit. "Alas!" said the Horse, "if you really wish me to be in good condition, you should groom me less, and feed me more."

Moral: A man may smile yet be a villain

The Ant & the Grasshopper

In a field one summer's day a Grasshopper was hopping about, chirping and singing to its heart's content. An Ant passed by, bearing along with great toil an ear of corn he was taking to the nest.

"Why not come and chat with me," said the Grasshopper, "instead of toiling and moiling in that way?"

"I am helping to lay up food for the winter," said the Ant, "and recommend you to do the same."

"Why bother about winter?" said the Grasshopper; we have got plenty of food at present." But the Ant went on its way and continued its toil. When the winter came the Grasshopper had no food and found itself dying of hunger, while it saw the ants distributing every day corn and grain from the stores they had collected in the summer. Then the Grasshopper knew.

Moral: It is best to prepare for the days of necessity.

John Horgan
Currently an Assistant Professor of History at Concordia University-Wisconsin in the United States. His on-going reading and research interests include plagues & diseases and food in world history . 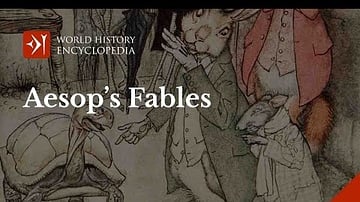 An Introduction to Aesop's Fables

A fable is a short story that usually includes animals that act...
Definition

Medieval literature is defined broadly as any work written in Latin...
Definition

In Our Time, Aesop
bbc.co.uk

Submitted by John Horgan, published on 08 March 2014. The copyright holder has published this content under the following license: Creative Commons Attribution-NonCommercial-ShareAlike. This license lets others remix, tweak, and build upon this content non-commercially, as long as they credit the author and license their new creations under the identical terms. When republishing on the web a hyperlink back to the original content source URL must be included. Please note that content linked from this page may have different licensing terms.