by Mark Cartwright
published on 13 October 2013

Available in other languages: Spanish

The Ara Pacis Augustae or Altar of the Augustan Peace in Rome was built to celebrate the return of Augustus in 13 BCE from his campaigns in Spain and Gaul. The marble structure, which once stood on the Campus Martius, is a masterpiece of Roman sculpture and, in particular, of portraiture. Senators, officials and the Imperial family are depicted on the wall reliefs of the monument in an animated procession, perhaps, the very procession which consecrated the altar site on 4th July 13 BCE or the celebratory procession to welcome the emperor's return.

Voted for by the Senate in 13 BCE the monument was completed within four years using Italian Luna marble and dedicated on 30th January 9 BCE. The structure has a central altar set on a podium surrounded by high walls (11.6 x 10.6 m) composed of large rectangular slabs. There are two entrances, one on the east and the other on the west (back) side, the latter having a short flight of steps due to the lower ground elevation on that side in its original position.

The 3 m tall altar itself stands on a 6 x 7 m podium and has relief scenes depicting Vestal Virgins, priests and sacrificial animals. The interior sculpture of the surrounding walls depicts fruit and flower garlands hanging from ox heads (bucrania) above fluting. The lower portion of the exterior walls has richly sculpted acanthus scrolls whilst the upper portions carry relief figures. The cornice of the surrounding wall is a modern addition and is, therefore, plain whereas the original cornice would have been highly decorative with palmettes at each corner. The whole structure, including the reliefs, would have been richly painted and have had touches of gilding.

On the east and west sides of the exterior walls are panels with mythological scenes including a version of the she-wolf nursing Romulus and Remus, Roma seated on a pile of armour flanked by Honos and Virtus, Aeneas sacrificing to the Penates and a female figure with two children who may be Pax, Venus Genetrix or Tellus (Mother Earth).

The relief figures on the north and south exterior walls are arranged in two groups. On the south side are Augustus and the Imperial family. On the north side are officials such as magistrates, senators, priests and their families. All are captured in a single moment as they participate in a procession. Some figures are speaking to each other, one figure (possibly Augustus' sister) holds a finger to her lips and calls for silence whilst elsewhere some children look decidedly bored with one small child pulling the toga of an adult in order to be picked up. The animation and individuality of the figures is a high point of Roman sculpture and the relief is also graded to give the scene depth and a further reality.

Interestingly, although Augustus is present in the scene, the emperor is actually not so easy to pick out, which is in great contrast to later Imperial sculpture where the emperor of the time is very much the focal point of the monument. As Charles Wheeler stated, 'If we would understand the Augustan period - its quiet good manners and its undemonstrative confidence - in a single document, that document is the Ara Pacis Augustae.'

The altar came to represent Pax (Peace), a concept particularly forwarded during the reign of Augustus and it was probably for this reason that the Ara Pacis appeared on the coins of Nero between 64 and 67 CE. Various pieces of the altar were re-discovered c. 1568, 1859 and 1903 CE and a more concerted excavation of the site was carried out between 1937 and 1938 CE. The hundreds of altar fragments, which had been dispersed across several European museums, were collected together and the altar reassembled. Largely complete, the altar now stands in the purpose built Museo dell'Ara Pacis, an elegant glass and stone structure next to the Mausoleum of Augustus in Rome.

We want people all over the world to learn about history. Help us and translate this article into another language! So far, we have translated it to: Spanish

The Pax Romana (Roman Peace) was a period of relative peace and...
Article

Emperor Augustus (27 BCE – 14 CE) accomplished much during his...
Definition 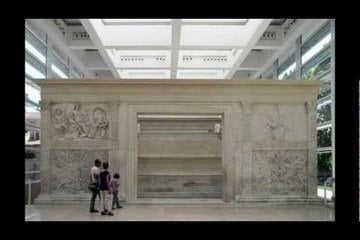 This activity has been designed to fit a 20-minute slot for your...

Submitted by Mark Cartwright, published on 13 October 2013. The copyright holder has published this content under the following license: Creative Commons Attribution-NonCommercial-ShareAlike. This license lets others remix, tweak, and build upon this content non-commercially, as long as they credit the author and license their new creations under the identical terms. When republishing on the web a hyperlink back to the original content source URL must be included. Please note that content linked from this page may have different licensing terms.