Available in other languages: Spanish

The Military Enlightenment of the 18th century was a concerted effort across Europe to engage with the science of war. Embracing rationalism and professionalism, especially in military education, statesmen, philosophers, and educators explored the relationship between the military and civilian spheres. Leading figures in Russia included Ivan Betskoi (1704-1795) and Mikhail Illarionovich Golenishchev-Kutuzov (1745-1813).

Under the purview of Ivan Betskoi, the Land Noble Cadet Corps became more than a military training school; it was also a purveyor of new Enlightenment culture and ideas within the military and, more broadly, the society. Betskoi's treatise on the Education of the Youth of Both Sexes cited a good number of Enlightenment philosophes, including Jean-Jacques Rousseau (1712-1778), as it proposed a grand vision of restructured educational system to create "a new type of people:" the Cadet Corps graduates who could do everything, from leading a cavalry unit to composing an eloquent letter or sonnet because they "acquired the solid knowledge of Geography, Politics, Ethics, Arithmetic, Geometry and other mathematical sciences; gained understanding of History and nurtured the desire to read books about the deeds of famous military commanders, about how to keep records of revenues and expenses in their regiment or their corps." (Fedyukin, 171-203)

Kutuzov: A Life in War and Peace

by Alexander Mikaberidze
This book provides a fresh biography of Kutuzov which separates historical research from later political propaganda. It examines his personal life and military accomplishments, relying on a wide range of primary and secondary sources as well as Russian archival material.
Learn More
The reformed Cadet Corps played a vital role in the institutionalization of the Enlightenment & the westernization of the Russian military & society.

Betskoi was an ardent proponent of a broad education that edified the learner. He abolished the military-style classification of cadets and introduced age-based grades; children as young as five could be enrolled in the Cadet Corps and, for the next fifteen years, received a well-rounded education that made them absorb history, architecture, art, rhetoric, and theater, practice their dance moves and singing, stage theater plays, and polish their Latin, German, and French. Personal accomplishments counted for more than pedigree and status, for the key to everything was, as one cadet commented citing his tutor, "the light of reason" (Glinka, 65).

The reformed Cadet Corps played a vital role in the institutionalization of the Enlightenment in Russia as well as the continued westernization of the Russian military and society. Its graduates shaped military culture for years to come and transmitted Enlightenment ideas they had absorbed during their schooling. As historian Eugene Miakinkov correctly points out:

The impulse for national education extended to the military as well, where officers took the cue from their empress and began to create a 'new type of officer' and to lay the foundations for the nineteenth-century military professional. (18)

As exciting as the lofty rhetoric of the Enlightenment and the vision of creating a new society was, it clashed with the Russian army's desperate need for well-trained professional military officers. Educational reforms worked on a philosophical level, but their encyclopedic character also deprived the education of the much-needed focus and practicality. Betskoi and his successors sought to protect the cadets from the corrupting influences of the world behind the walls of the Menshikov Palace. The restriction of contact between the future officers and the world was designed to cultivate certain chasteness of habits, thoughts, and nature of the cadets who were destined to become 'a new type of people.' But it hardly prepared them for the grim realities of the military service, not to mention the blood and gore of the battlefield.

Graduating cadets, who were commissioned as lieutenants, reached their units having very little if any experience of drills, firing weapons, deploying and maneuvering tactical units, or organizing marches. This disconnect caused some contemporaries to observe that those educated according to Betskoi’s reforms "could perform comedies and write poetry, in short, they knew everything except what an officer should have known" (Semen Vorontsov to Alexander Vorontsov, 8/19 June 1789). A change was needed, one that would maintain the Enlightenment spirit of Betskoi's reforms and reorient the educational process back to its military essentials.

Such a change came in the person of Mikhail Illarionovich Golenischev-Kutuzov, the veteran of the Russo-Polish and Russo-Ottoman Wars who had spent three decades in field service. The diversity of his military service is striking – a staff officer, quartermaster officer, commander of musketeer, grenadier, jager, lancer, and light cavalry units, in addition to serving as the Russian emperor's emissary to the Prussian court and plenipotentiary ambassador to the Ottoman Empire. Few officers, in any country, could boast of such a varied early career, which, in turn, underscores Kutuzov's innate leadership, hard work, and ability to learn and adapt. He had already gained the reputation of a military philosopher. He was a voracious reader and was well acquainted with the ideals of the Enlightenment. Moreover, he had written a major military treatise that grappled with a subject that had been little explored in Russia and reflected many key themes of the Military Enlightenment, including the rational study of warfare, insistence on showing compassion and dignity for soldiers, and the emphasis on the practical implementation and effectiveness.

Kutuzov was appointed as the director general of the Cadet Corps on 26 September 1794. He threw himself into the work with his usual determination. A close examination of the inner workings of the Cadet Corps revealed a number of deficiencies. Kutuzov's predecessors, as laudable as they were in their commitment to Enlightenment ideals, had failed to deal with administrative and fiscal matters, leaving behind administrative maladministration and financial mismanagement. The institution was deep in debt, staff members disheartened by long overdue promotions and raises, teachers complained of the cadets' inattention and indolence, while the students grumbled about the teachers' incompetence. The new director, therefore, began his tenure by insisting on accountability and discipline in the corps.

Cadets were expected to show up on time to their lectures and drills, look sharp, and perform to the best of their abilities. Instructors were required to provide regular updates on their students' progress. Cadets who failed to maintain academic standing or showed signs of "idleness" were given one month to improve their grades or suffer consequences (Order to the Cadet Corps, 13/24 February 1797). Kutuzov prohibited corporal or excessive punishment and instead punished cadets with the loss of free time or being confined to their rooms. The corps officials, both instructors and the supporting staff, were also held accountable. Conscientious officials were rewarded and promoted, while those found to be ineffectual or involved in inappropriate behavior were punished. Such emphasis on discipline and order did not mean that Kutuzov was a martinet. He went out of his way to win over the hearts and minds of both staff and cadets, meeting them in person, addressing their questions, and soliciting their input on existing problems with the corps.

The biggest reform involved revising the Cadet Corps' curriculum, which Kutuzov found too theoretical. He sought to reorient it to the corps' original objective – that of training a new generation of military officers. The next three years saw the introduction of the new educational program that centered on practical military matters while nurturing the cadet's other skills and interests. The cadets now spent more time learning military tactics, land navigation, weapons handling, and basics of drill instruction, marching, field fortification, and artillery. Kutuzov took a keen interest in the curriculum and personally gave lectures on military history and battle tactics, drawing upon his vast personal experiences. He instituted a process of individual review of academic performance of each cadet; if any showed signs of struggling to keep up, he offered additional help and individual training so they could successfully complete their courses. The best students were praised and recognized with various awards.

Emphasizing hands-on experience, Kutuzov required cadets, who had previously rarely left the institution, to participate in summer military exercises where they built campsites, slept in tents, and practiced tactical exercises. To expose cadets to the realities of army life, Kutuzov purchased hundreds of muskets, grenades, and other military equipment with which they trained, and acquired diverse foreign newspapers and journals so that students could remain abreast of the newest developments in Europe. Instead of graduating cohorts of cadets every three years, as was done under his predecessors, Kutuzov established an annual review and promotion based on "a thorough evaluation of each cadet's accomplishments, behavior, and academic performance" (Mikhail Kutuzov to Empress Catherine II, 22 December 1794/2 January 1795).

Kutuzov's reforms thus sought to find a compromise that would maintain the Enlightenment spirit of Betskoi's reforms while reorienting the educational process back to its military essentials. Their success ensured that the Cadet Corps trained a new generation of officers who were both well-educated and prepared for military service and went on to serve with great distinction during the Napoleonic Wars.

We want people all over the world to learn about history. Help us and translate this article into another language! So far, we have translated it to: Spanish

Interview: Kutuzov a Life in War and Peace by Alexander Mikaberidze

Join World History Encyclopedia as they have a chat with author...
Article

Dogs & Their Collars in the Age of Enlightenment

In medieval and Renaissance Europe, dogs were considered little...
Image 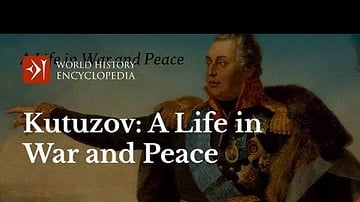 Kutuzov: A Life in War and Peace with Alexander Mikaberidze

Kutuzov: A Life in War and Peace by Alexander Mikaberidze is about...