Running a website with millions of readers every month is expensive. Not only do we pay for our servers, but also for related services such as our content delivery network, Google Workspace, email, and much more. We would much rather spend this money on producing more free history content for the world. Thank you for your help!
$2378 / $21000
❤ Donate

Available in other languages: Indonesian

In this interview, James Blake Wiener speaks to Annie Liu, International Coordinator at the Shung Ye Museum of Formosan Aborigines in Taipei, Taiwan, about her museum in addition to the cultures and histories of one of Asia’s most obscured indigenous peoples.

JBW: Annie, many see Taiwan as a young, modern, East Asian island nation. However, Taiwan has a very rich history, which extends deep into the past. Why do so few people outside of Taiwan know about the Taiwanese indigenous population? What has your museum done to redress?

Follow us on Youtube!
Foreign visitors to Taiwan always find themselves fascinated by the delicacy of indigenous artifacts.

Located across the street from the National Palace Museum, the Shung Ye Museum of Formosan Aborigines becomes a natural gate of local indigenous culture to foreign visitors. Visitors purchasing the joint tickets of the National Palace Museum and the Shung Ye Museum of Formosan Aborigines enjoy a 20% discount from admissions of both museums. Therefore, we do encourage visitors to purchase joint tickets and get to know the diversified cultures of Taiwan. As for foreign visitors to Taiwan, as soon as they step into our museum with the intention to know more about the island, they always find themselves fascinated by the delicacy of indigenous artifacts. They come to our museum without expecting to see such beautiful artifacts and costumes most of the time, but they are always satisfied with the rich knowledge and exhibitions we offer. Our museum is not only a distinguished museum but also a spot with educational purposes, and a window into Taiwanese indigenous culture. This is why Michelin Green Guide Taiwan recommended Shung Ye Museum of Formosan Aborigines as a two-star spot.

JBW: Most historical linguists consider Taiwan to be the cradle of the Austronesian language family, which is among the largest in the world. Tell us about the ethnic and cultural diversity between the various indigenous tribes in Taiwan —were they significant?

Still, there are other indigenous peoples in Taiwan, called the Pingpu in general, who are trying to get officially recognized by the government. Although there are some similarities in the culture of different indigenous groups, each group has its own significance and characteristics. None of the indigenous people in Taiwan had written language, so everything was passed down orally. Oral history and folklore have become the oldest historical records of Taiwanese indigenous peoples. Still, there are some undeniable connections between Taiwanese indigenous peoples and the rest of Austronesians. For example, the Maori people in New Zealand have similarities between their ancient ballads and the Amis ones in Taiwan. This means they had connections hundreds of years ago. There are more stories like this waiting to be discovered.

JBW: Over 1866 ethnological artifacts are on display at the Shung Ye Museum of Formosan Aborigines, including priceless ceremonial instruments, handicrafts, costumes, utensils, and photographs. The museum also oversees a modern art collection by contemporary indigenous artists. Among the objects on display, which seem to captivate museum visitors the most? What are the star attractions that should not be missed by visitors?

JBW: The beauty of indigenous Taiwanese weaving and costumes is difficult to ignore. Could you tell us more about the costume collection at the museum, and how the museum acquired these pieces?

All the objects in our museum were donated by our founder, Chairman Safe C. F. Lin. He has a huge passion for Taiwanese indigenous objects along with Taiwanese art and started to collect them over 40 years ago. Then, 25 years ago, he established the museum and shared his collection with the public.

JBW: The museum hosts permanent and rotating exhibitions, and it also has a unique collection of rare photographs of indigenous villages. Many indigenous peoples originally built houses from heavy slate as protection against typhoons. Annie, what can you tell us about these houses and the museum’s ethnographic photography collection?

The Rukai & the Paiwan used the slate because it is strong enough to resist a typhoon.

AL: On the second level of our museum, we have a 1:1 scale model of a slate house. It is so real that young visitors are always curious if they could walk into the house model on their own. In the old times, the Rukai and the Paiwan chose slates, which were available in the mountainous areas of southern Taiwan, to build their houses. They used the material because it is strong enough to resist a typhoon, and it also helped to keep the home cool in summer and warm in winter. Besides, the slate house was also built with the entrance low and narrow, which had a defensive function.

As for the museum’s ethnographic photography collection, we are proud that we do have photos with historical meanings and modern background. In this way, the audience has a chance to appreciate the beauty of indigenous artifacts and see the past and present situation of Taiwanese indigenous peoples through photos for display.

JBW: As in the Americas, the indigenous population of Taiwan faced centuries of colonization, marginalization, and assimilation. Nonetheless, some studies show that over 70% of Taiwanese people have some indigenous ancestry today. How do Taiwanese people view the Taiwanese indigenous peoples today? Moreover, why is it important for Taiwanese and foreigners alike to learn more about their histories and cultures?

JBW: Annie, thank you for introducing us to your museum and for lending your expertise.

AL: Thank you so much, James. It is my pleasure to introduce our museum.

We want people all over the world to learn about history. Help us and translate this article into another language! So far, we have translated it to: Indonesian 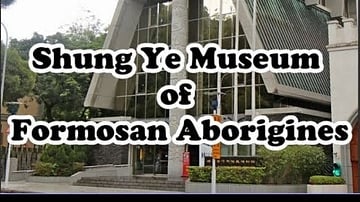 This article documents and elaborates on the many critical behind-the-scenes...
Article

The Iraq Museum: A Brightness in the Darkness

In this interview, James Blake Wiener, Co-Founder and Communications...

Submitted by James Blake Wiener, published on 26 August 2021. The copyright holder has published this content under the following license: Creative Commons Attribution-NonCommercial-ShareAlike. This license lets others remix, tweak, and build upon this content non-commercially, as long as they credit the author and license their new creations under the identical terms. When republishing on the web a hyperlink back to the original content source URL must be included. Please note that content linked from this page may have different licensing terms.