by Mark Cartwright
published on 03 February 2015

Available in other languages: Spanish, French

Tulum, on the east coast of the Yucatan peninsula in southern Mexico, was an important Mesoamerican centre which displayed both Maya and Toltec influence. Tulum was a major trading and religious centre between the 11th and 16th centuries CE and, dramatically situated near the sea, it is one of the most evocative ancient sites in Mexico.

First settled in the 6th century CE, Tulum prospered, especially so under Mayapán influence from c. 1200 CE, and was an important centre trading in such typical barter goods of the period as cotton, foodstuffs, copper bells, axes, and cacao beans. Protected by the jungle of Quintana Roo, the site survived the general Maya collapse and was largely left untouched by the Spanish.

The ceremonial complex of Tulum, built on a 12 metre high limestone cliff, was surrounded on three sides by fortification walls, while the fourth side faces the Caribbean Sea. Indeed, the very name Tulum is a colonial one and means 'wall'. The original local name may have been Zama meaning 'dawn' in reference to the site's position facing east across the sea.

The largest structure is the Castillo which is in fact a temple pyramid displaying architectural influences from the Toltec civilization.

Residential buildings were built outside the sacred walled area which was reserved for the rulers of Tulum. The largest structure is the Castillo (Castle) which is in fact a temple pyramid displaying architectural influences from the Toltec civilization, such as over-door niches and serpent-columns. In addition, the stucco sculpture which decorates the building recalls those at Mayapán. The halls of the Castillo, and also Structure 25, are also notable for their well-preserved examples of beam-and-mortar roofs.

The Temple of the Frescoes is a squat square building which has undergone several modifications over the centuries. In the Classic period there seems only to have been a vaulted shrine, but this was later surrounded by a larger structure which had a four-column facade. Later still, the second storey was added. Stucco faces on the exterior suggest the building was dedicated to the god Itzamnaaj.

The earliest wall paintings, which give the building its name, date to the 11th or 12th centuries CE, but some are certainly later, perhaps post conquest. They depict figures performing various actions such as a woman grinding corn on a stone (metate), the goddess Chak Chel carrying two images of the god Chahk, and the Aztec god Tezcatlipoca with his black eye band and turquoise mask. The latter strongly suggests contact with central Mexican centres. Most figures are strikingly painted in blue on a black background, and panels are divided by twisted snake-like borders, perhaps representing umbilical cords and therefore a genealogical connection between the figures. Frescoes appear on both the outer and inner walls of several other buildings at Tulum but always using only three colours – red, blue, and yellow – with outlines painted in black and accompanied by Maya glyphs.

Other structures at Tulum include the dramatically sited Temple of the Winds which was built in honour of the wind god and helped guide sailors through the reef, a palace building in a poor state of preservation, various platforms, and the Temple of the Descending God. This latter building and the presence on several other structures of stucco figures of winged gods descending suggest the site was specifically in honour of this strange deity also known as the 'diving god' and perhaps connected to the planet Venus and the associated Maya god Xux Ek.

We want people all over the world to learn about history. Help us and translate this definition into another language! So far, we have translated it to: Spanish, French

The Red Handprints of Cozumel & Tulum

The Maya sites of San Gervasio (on the island of Cozumel) and Tulum... 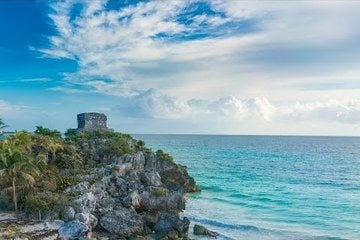 Temple at Tulum by Catherwood

Temple of the Winds, Tulum

The Temple of the Winds at the ancient Mesoamerican site of Tulum...

Submitted by Mark Cartwright, published on 03 February 2015. The copyright holder has published this content under the following license: Creative Commons Attribution-NonCommercial-ShareAlike. This license lets others remix, tweak, and build upon this content non-commercially, as long as they credit the author and license their new creations under the identical terms. When republishing on the web a hyperlink back to the original content source URL must be included. Please note that content linked from this page may have different licensing terms.