by CrashCourse
published on 18 April 2021

Only a couple of decades after the end of the First World War—which was supposed to be the War that Ended All Wars—another, bigger, farther-flung, more destructive, and deadlier war began. Today, you'll learn about how the war in Europe progressed, from the Molotov-Ribbentrop pact and the invasion of Poland, to the Western and Eastern fronts, to VE Day and the atom bombs used in Japan. 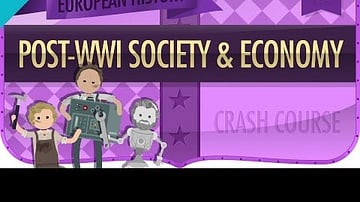 Military supremacy of the seas could be a crucial factor in the...
Definition

Carthaginian warfare has been overshadowed by defeat to Rome in...
Article

In the search for ever more impressive and lethal weapons to shock...
Definition

The Carthaginians were famed in antiquity for their seafaring skills...
Definition

Roman warfare was remarkably successful over many centuries and...

Original video by CrashCourse. Embedded by John Horgan, published on 18 April 2021. Please check the original source(s) for copyright information. Please note that content linked from this page may have different licensing terms.