by Graham Squires
published on 08 November 2022 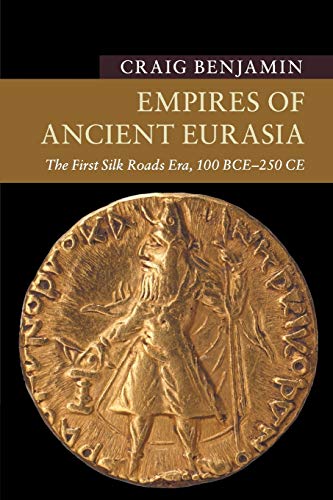 This is an interesting account written for a general audience that discusses the history of the Silk Roads from the 2nd century BCE to the 3rd century CE.

In the book's Introduction, Craig Benjamin writes that, between the 2nd century BCE and the mid-3rd century CE, the Silk Roads linked together many cultures and communities throughout Afro-Eurasia. This is the “First Silk Roads Era,” which, according to Benjamin, "resulted in the most significant transregional commercial and cultural interactions experienced by humans to this point in history.” Benjamin, who is Professor of History at Grand Valley State University and President of the World History Association between 2014 and 2015, is well-qualified to make such an observation.

... Benjamin gives value and meaning to what would otherwise be merely a mass of details.

In addition to the Introduction and Conclusion, Empires of Ancient Eurasia: The First Silk Roads Era, 100 BCE - 250 CE contains nine chapters. In the Introduction, Benjamin outlines his argument and locates the Silk Roads within the broader context of contemporary debates around world history. He points out that, what is commonly referred to as the singular "Silk Road" was actually a network of roads. Thus, it is more suitable to call it the "Silk Roads." In Chapter One, he describes the natural environment along the Silk Roads and explains how pastoralists gradually occupied huge areas of the Eurasian steppe. Chapter Two traces the history of early China from the emergence of the first agrarian community to the appearance of the early dynasties. In Chapter Three, Benjamin picks up the story of the Silk Roads' origin by following Zhang Qian's journey from Chang’an, the early Han dynasty's capital, into Central Asia and back.

In Chapter Four, Benjamin explains the various techniques that transported large quantities of Chinese silk to the West. Chapter Five focuses on the overland trade between the eastern Mediterranean region and Central Asia. Chapter Six examines the literary, numismatic, and archaeological evidence related to the Parthian Empire, one of the greatest imperial states in the ancient Middle East. Chapter Seven discusses the Kushans who, like the Parthians, created a powerful imperial state during the 1st century CE. Benjamin provides, in Chapter Eight, an account of the maritime networks constructed during the First Silk Roads Era, linking Roman Egypt, East Africa, the Arabian Peninsula, and the Persian Gulf with South Asian ports. Finally, in Chapter Nine, the book explains the decline of the First Silk Roads Era as many key participating imperial states were forced to withdraw from the network.

The book is very clearly written and, given the complexity of the topic, easy to understand. It also contains 58 photos and helpful maps to complement the text. There are many publications on the Silk Roads, but Benjamin's book stands out because it goes beyond the simple presentation of facts and hints at a better way of understanding world history as a whole. Ever since "world history" was developed as an academic subgenre in the 1990s, a lot of great research has been done. Much of it, however, is quite fragmentary and lacks overarching conceptual frameworks within which readers can better interpret history. By focusing on a famous road and trade network covering three continents, Benjamin gives value and meaning to what would otherwise be merely a mass of details.

This book is recommended to people with an interest in not only the history of Central Asia but also world history in general.

$33.08
free shipping worldwide
$23.33
plus shipping
By purchasing books through this website, you support our non-profit organization. World History Encyclopedia receives a small commission for each book sold through our affiliate partners.

The Silk Road was a network of ancient trade routes, formally established...
Definition

Silk is a fabric first produced in Neolithic China from the filaments...
Article

Bangkok was once more commonly known as the Venice of the East...

$33.08
free shipping worldwide
$23.33
plus shipping
By purchasing books through this website, you support our non-profit organization. World History Encyclopedia receives a small commission for each book sold through our affiliate partners.