Articulating Bodies: The Narrative Form of Disability and Illness in Victorian Fiction

by Reisa Rogovein
published on 09 November 2022 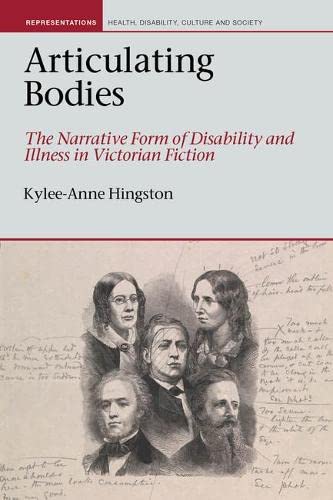 I highly recommend this book for its brilliant insights into both the discussed fictional characters and the historical perspectives of Victorians during the 19th century. What makes Hingston's approach unique are the tantalizing references to the behaviors of the various Victorian fictional characters, which tease the readers to indulge in deeper thinking.

Hingston's book has a diverse audience from public health and humanities researchers to young children being read to by their parents. This is especially true for the book's fifth chapter: "Fairy-Tale Bodies." Her overall tone is an everyday one, exemplified by the way she reaches her readers through empathetically describing the half-blind, deaf, and deformed Quasimodo from Victor Hugo's The Hunchback of Notre Dame (1831). Hingston shows that contemporary Victorians would have been able to correlate Quasimodo's physical disabilities with his covert mental and spiritual disabilities. This leads to her thesis: to readers during the Victorian era, the physical disabilities of fictional characters connote their concurrent mental and spiritual disabilities.

Hingston employs the writing strategy of division and classification.

Hingston employs the writing strategy of division and classification. She divides her focus on Victorian fictional characters' physical, mental, and spiritual disabilities into multiple discussion points in the book's Introduction. She then reclassifies the different Victorian literary components into new categories in the book's six main chapters, Afterword, and Index. In Hingston's Introduction, she describes the wooden-legged Silas Wegg from Charles Dickens's Our Mutual Friend (1865). In the story, Wegg approaches a taxidermist, Mr. Venus, for a compatible leg bone to replace the missing part of Wegg's skeleton.

Chapter One, "Grotesque Bodies," looks at the aforementioned Quasimodo and the familiar Edward Hyde in Robert Louis Stevenson's The Strange Case of Dr. Jekyll and Mr. Hyde (1886). Hingston shows that although we sympathize with Quasimodo, we feel an emotional distance, coupled with possible fear, as the demonic Hyde takes possession of the hapless Dr. Henry Jekyll. In Chapter Two, we meet the character Esther Summerson in Dickens's Bleak House (1852). Esther suffers from facial scarring caused by smallpox and the concomitant loss of self-esteem. This underlines Victorians' perception that physical disabilities are often linked to mental and spiritual disabilities. The sensual title character who indulges in her bigamous passion for her two husbands in Mary Elizabeth Braddon's Aurora Floyd (1863) is discussed in Chapter Three. Chapter Four, "Sanctified Bodies," moves away from the intense physicality in previous chapters to theological self-sacrifice with an overtone of ecstasy. This is presented in the title character of Ellice Hopkins's Rose Turquand, who virtually crucifies herself with the devoted care she lavishes on her disabled cousin.

Chapter Five references Dinah Craik's The Little Lame Prince (1875). The story is a morality tale for children, emphasizing that just because someone is physically disabled, it does not mean that the person is mentally or spiritually deficient. Victorians might perceive that Prince Dolor's prostheses are merely stopgaps to his inevitable moral decline. Chapter Six returns to Stevenson's Edward Hyde, focusing both on his frightening appearance and the accompanying mental and spiritual challenges that led him to commit murderous acts. There is also Dr. Jekyll's more figurative disability (his powerlessness over Hyde), which prompts readers to think if Hyde has always been part of Jekyll.

This book deserves scholarly and public attention because of its brilliant insights into both the referenced fictional characters and the historical perspectives of Victorians. Although the book only has four images - all are reprints of figures from the primary sources she uses - these images assist the fictional characters that Hingston discusses in encouraging readers to build their literary connections and comparisons. Articulating Bodies is a fascinating book with great depth.

$72.72
plus shipping
By purchasing books through this website, you support our non-profit organization. World History Encyclopedia receives a small commission for each book sold through our affiliate partners.

Originality in literary compositions in the ancient world did not...
Definition

Persian literature differs from the common definition of “literature”...

$72.72
plus shipping
By purchasing books through this website, you support our non-profit organization. World History Encyclopedia receives a small commission for each book sold through our affiliate partners.