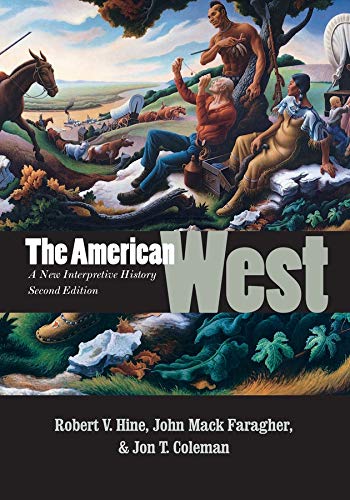 In this second edition of a fundamental book on the American West, the authors present new research and perspectives to make this complicated history clearer and easier to understand while not being swayed by bias in historical documents. This book functions best as a university course book but will benefit all history or non-history scholars as an introduction to the American West and Native American past.

When the first edition of The American West: A New Interpretive History, penned by Professor Robert V. Hine (1921 - 2015) and Professor John Mack Faragher, was published in 2000, it was an instant success despite the field of the American West history already having a comprehensive list of popular books. During the production of the second edition, Jon T. Coleman joined in the writing process. Hine, Faragher, and Coleman examine the American West in a similar fashion as the trend of the American West history research made popular by historians like Patricia Limerick and William Cronon. This scholarship trend that the book’s title refers to - the “New Western History” which started around the 1980s - focuses on the history that the early studies led by Frederick Jackson Turner overlooked: the environment, gender, and multi-ethnic interactions. This second edition of the 2000 version provides new materials on the research on Native American history and historical popular media done in the 21st century.

This second edition of the 2000 version provides new materials on the research on Native American history and historical popular media done in the 21st century.

The American West’s history has been a topic of exploration, prejudice, romanticization, supremacy, and war. With the fast-advancing transportation and communication technology, the definition of “the American West” changes as well. The “West” to a traveler on the transcontinental railroad during the 1870s is drastically different from what a person catching a Sunday flight from Boston to Los Angeles might think. It is no easy task to cover this complicated history in one book, and many have not done an impressive job with it. This is why it is especially helpful and effective when this book’s three authors sacrifice some historical depth to expand the width.

This book’s 12 chapters follow in chronological order starting from the Spanish conquest during the 15th century with the French merchants and British colonists following behind. The United States as a country is not discussed until Chapter Four. Chapters Five to Seven examine the conflicts with Native American communities, wars with Mexico, technological developments, and business enterprises. Chapter Eight is an important study on the diversity of people’s backgrounds, such as U.S.-born Whites, new immigrants from Europe, Asia, and Latin America, and others, in the American West during the 19th century. Chapters Nine to Eleven look at the West during the early 20th century, when the traditional 19th-century definition of “the West” no longer applied as the U.S. mainland was fully populated and urbanization sprawled along the Pacific Coast. Chapter Twelve, a new content after the first edition, studies the West in public perception through the lenses of tourism and popular culture. These twelve chapters cannot cover every aspect of the American West. Through reading these chapters, however, one will obtain an inclusive view of this history of land and territory.

What makes this book stand out further is the visuals. This book contains an astonishing 220 black-and-white images of artifacts, artworks, maps, publication excerpts, popular culture, or photos that greatly assist students’ understanding. As a book that expansively covers recent and past scholarship on the American West, the bibliography following each chapter provides an excellent source of further reading materials for the respective time period.

This masterpiece of history writing, one of both historical information and of a semi-conversational tone that makes the book approachable for a greater audience, is written by three highly experienced history scholars. Hine was Professor Emeritus of History at the University of California, Riverside, Faragher is Yale University’s Howard R. Lamar Professor Emeritus of History and American Studies, and Coleman serves as professor of history at the University of Notre Dame. To other history professors, this book might be too introductory if used as a source of information, but it is a necessary title to consider when designing history curriculums for university students.

$30.94
free shipping worldwide
$30.00
plus shipping
By purchasing books through this website, you support our non-profit organization. World History Encyclopedia receives a small commission for each book sold through our affiliate partners.

Slavery was practiced by the Native Americans before any Europeans...
Article

$30.94
free shipping worldwide
$30.00
plus shipping
By purchasing books through this website, you support our non-profit organization. World History Encyclopedia receives a small commission for each book sold through our affiliate partners.