by Graham Squires
published on 03 November 2022 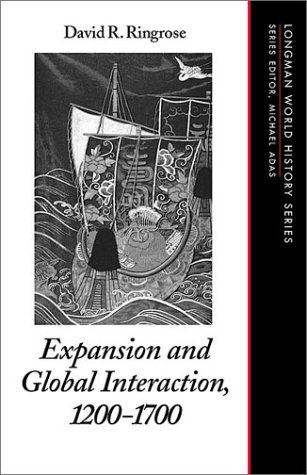 This book is an interesting examination of the interactions between Europeans and various other societies before and after the Age of Exploration in the 15th and 16th centuries. It is aimed at university students but should be of interest to anybody with a passion for world history.

Before he passed away in 2020, David Ringrose was Professor Emeritus of History at the University of California, San Diego. He was an expert on the history of Spain while also having an interest in world history at large. As the book's Preface explains, Expansion and Global Interaction: 1200-1700 grew out of a collaboration at a graduate course he taught in.

Generally speaking, one of the goals of studying world history is to try and counter the ethnocentric bias in the teaching of history. For example, the traditional approach to the so-called European "voyages of discovery" in the late 15th and 16th centuries is to concentrate on the things Europeans did and ignore the fact that many locations the explorers were "discovering" were replete with established and vibrant societies.

As Ringrose shows here, a focus on the concept of "interaction" seems like a productive area to explore.

A lot of interesting research has been done on those societies over the last 40 years, directing the research on the interaction between Europeans and non-Europeans in a new direction. As this book's title suggests, Ringrose's work is an example of that kind of research. Its content can easily be understood by looking at the chapter titles:

The text contains quite a few black-and-white photographs and a number of excellent maps. It also cites sections of primary sources that are informative and related to the topic. Looking at the book's format, this book was written with the intention to be used as a textbook for university courses.

However, while the book's appearance may be a little dull, the content is really interesting. One problem that world historians have when trying to counter the Eurocentric bias in the teaching of history is to find a conceptual framework that is a viable alternative. Such a framework needs to be simple enough for students to understand yet powerful enough that it can organize a lot of complex material. A consensus on what that framework might be has yet to emerge. As Ringrose shows here, a focus on the concept of "interaction" seems like a productive area to explore.

"World history" is a term with many layers of meaning. Nowadays, putting "world" in the title of history books has become something of a fashion as a way of acknowledging recent trends in academic research. Often, unfortunately, the content of these books does not really reflect any new perspectives. Moreover, the word "world" is being used in the same way it is used in "world music" to simply mean "non-European." Ringrose's book does not fall for either of these errors. "World history" should be used not in a way to make a biased book appear more inclusive nor does it completely exclude European history, and Expansion and Global Interaction: 1200-1700 does a great job balancing the complexity of the phrase "world history." Despite that, perhaps Ringrose emphasizes too much on the divide between Europe and the non-European world. This tends to disguise the fact that "interaction" between various European societies was also an important topic of study just like the interaction between non-European ones. Still, this book is very much worth reading even though it was originally published in 2000.

$1.37
plus shipping
By purchasing books through this website, you support our non-profit organization. World History Encyclopedia receives a small commission for each book sold through our affiliate partners.

The Spice Trade & the Age of Exploration

One of the major motivating factors in the European Age of Exploration...
Article

Global Trade in the 13th Century

In the 13th century, astonishing quantities of spices and silk...
Article

Trade and commerce in the medieval world developed to such an extent...

$1.37
plus shipping
By purchasing books through this website, you support our non-profit organization. World History Encyclopedia receives a small commission for each book sold through our affiliate partners.