by Graham Squires
published on 30 October 2022 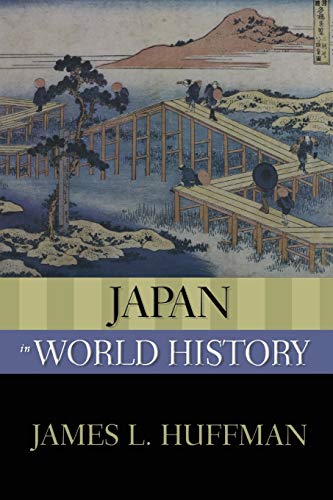 This book by James L. Huffman is a short introduction to Japanese history aimed at a general readership. It is well written and easy to understand, so it would be useful for anyone unfamiliar yet wanting to learn more about this topic.

This is a volume in the New Oxford World History series. The aim of the series is to provide an account of world history that is broader than the old approach that tends to focus only on Europe and North America. The author of Japan in World History, James Huffman, is Professor Emeritus of History at Wittenburg University and a well-known figure in Japanese studies. This is a short book of just 170 pages, but it offers a succinct overview of Japanese history as a whole.

It is a useful entry-level text for non-specialists wishing to build up more knowledge of Japanese history.

Chapter One deals with the early periods in Japanese history up until 645 CE. Chapter Two covers the establishment of the ritsuryō state in the Nara period and aristocratic rule during the Heian period (645 - 1160). Chapter Three provides an account of warrior rule under the Kamakura and Muromachi shogunates (1160 - 1550). Chapter Four describes the Azuchi-Momoyama and Edo periods (1550 - 1850). In Chapter Five, the Meiji Restoration and the Meiji period are discussed (1850 - 1905). Chapter Six provides an explanation of the period leading up to and including the Pacific War (1905 - 1945), and the final chapter ends the book with the post-war period. The book contains numerous black-and-white photographs and several maps that helpfully complement Huffman's writing. The book is well-structured and easy to read. It is a useful entry-level text for non-specialists wishing to build up more knowledge of Japanese history.

The main criticism is that the book lacks an overall theme. As is common with this kind of narrative and introductory approach to history, events in one period are described, and events in the next period are described, but there is not much explanation about the connections between the two periods. An alternative approach, and possibly a more interesting one, is to self-consciously interpret the past from the perspective of present Japan. Contemporary Japanese society is the end product of a long process of historical development.

Another way to approach the past is to ask in what way each historical period has contributed to that development. For example, present-day Japan has a highly centralized and bureaucratic form of government. While the exact form of that government has been shaped by recent events, its origins can be traced back to the state created in the 7th and 8th centuries CE. The weakening of that system led to the period of warrior rule between the 13th and 15th centuries. The disintegration of the warrior government resulted in civil wars during the 16th century. This, in turn, led to the reunification of the country under the Tokugawa that paved the way for the emergence of the modern Japanese state in the Meiji period. The defeat in the Pacific War was followed by the refashioning of state institutions into what Japan appears today.

Stressing the causal connections between periods could make a general-survey-style approach to history more meaningful. This approach might work even better with this book when considering the development of Japan’s rich cultural history. Some of Japan’s most famous cultural symbols date back to quite different periods. For example, the tea ceremony and rock gardens came from the Muromachi period while haiku poetry and woodblock prints are products of the Edo period. Highlighting how these iconic art forms are closely linked with the era of their production would make this book more compelling, especially when it is aimed at a general audience. It is unfair to criticize an author for writing the book they wrote while using the mindset of how one thinks the author should have done. With this type of short introductory text aimed at a wide readership, it would not hurt to explain more why the events being described are important and still relevant today.

$28.80
free shipping worldwide
$27.95
plus shipping
By purchasing books through this website, you support our non-profit organization. World History Encyclopedia receives a small commission for each book sold through our affiliate partners.

The Meiji Restoration was a political event that took place in...
Definition

The Meiji period refers to the period in Japanese history from...
Definition

Ancient Japan has made unique contributions to world culture which...

$28.80
free shipping worldwide
$27.95
plus shipping
By purchasing books through this website, you support our non-profit organization. World History Encyclopedia receives a small commission for each book sold through our affiliate partners.