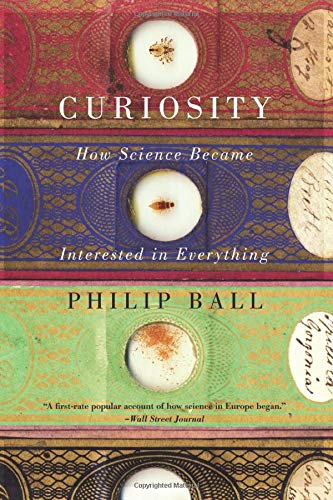 Philip Ball's "Curiosity" is a comprehensive narrative of how having a curious mindset helped 17th century European scientists and philosophers fuel the Scientific Revolution. Ball's conversational tone and discursive recollection of history might not satisfy experienced professional historians but is an enjoyable and thought-provoking read for all devoted history enthusiasts.

Behind the Scientific Revolution was a revolution in mindset and perspective. During the Middle Ages, the search for new knowledge in Europe was constrained by a theocratic society. The Renaissance helped to remove some of those limits and gave some space for human curiosity to stretch its legs. In Curiosity: How Science Became Interested in Everything, Philip Ball discusses the ways curiosity helped scientists around the 17th century to further human knowledge and set a foundation, or paradigm, for modern science.

Ball shows that the word "curiosity" differed in meaning depending on the time period. During early medieval Europe, for example, having curiosity was deemed as a fault by religious doctrines. After the Renaissance, the connotation of curiosity ranged from an informal and disorganized fond of collecting untraditional information to an ordered and systematic learning of uncharted fields of knowledge. The Scientific Revolution, Ball argues, was the maturation from the former connotation of curiosity to the latter.

The Scientific Revolution, Ball argues, was the maturation from the former connotation of curiosity to the latter.

Each of the book's 13 chapters acts like a short biography of a significant historical figure or event. Chapter Two, for instance, looks at the formation of secret societies and their approach to learning about unexpected – in the eyes of medieval Europeans – knowledge. Chapter Five explores the foundation of London's Royal Society. In Chapter Six, Ball looks at how overseas explorations brought new knowledge to Europe and added to the Scientific Revolution's exponential growth. The story of Galileo and his telescope is retold in Chapters Seven and Eight, while Robert Hooke's microscope occupies Chapter Ten.

The study of Francis Bacon, René Descartes, and Galileo's scientific thoughts is the theme that very loosely holds the book together. Through these three figures' work, this book attempts to map out how knowledge and thoughts became organized after the Scientific Revolution. However, Ball only paints a vague picture of this transition due to how unconnected or even digressive some of the book's contents are. As mentioned, the book resembles more of a retelling of many different history stories from the 17th century instead of a cohesive scholarly argument for "curiosity."

In addition, the book does not have formal footnote or endnote citations. All citations are crammed into an index at its end, making it difficult for scholarly readers to examine deeper into Ball's sources. The few images that the book features contribute more to increasing the book's enjoyability than adding to a scholarly discussion. To complement Ball's gaps in thematic connections, one could read Thomas Kuhn's The Structure of Scientific Revolutions (1962) and Steven Shapin's The Scientific Revolution (1996).

Although Ball's book might be discursive, it is an engaging and informative read that contains comprehensive details about this time of exciting interactions amongst new-born scientific thoughts. This book contains an extremely helpful "Cast of Characters," which is a seven-page list of famous and overlooked figures from the Scientific Revolution. Ball also briefly discusses society today's interaction with the Large Hadron Collider and other major scientific news, linking the 17th century scientists to their 21st century intellectual posterity. Devoted history enthusiasts or scholars looking for an introduction to that period in history will find this book helpful as a valuable read, yet more advanced historians might want something more academic and focused.

Philip Ball's expertise lies more in science writing. Having been an editor for Nature for over 20 years and the author of more than 30 science books, he treats history more as a helpful interdisciplinary tool when studying science instead of his main research focus. From that perspective, it is enjoyable and extremely valuable to read and see how Ball combines natural philosophy, science, and history all in one book.

$17.64
free shipping worldwide
$20.00
plus shipping
By purchasing books through this website, you support our non-profit organization. World History Encyclopedia receives a small commission for each book sold through our affiliate partners.

The achievements of ancient Greek science were amongst the finest...

$17.64
free shipping worldwide
$20.00
plus shipping
By purchasing books through this website, you support our non-profit organization. World History Encyclopedia receives a small commission for each book sold through our affiliate partners.