by Graham Squires
published on 29 October 2022 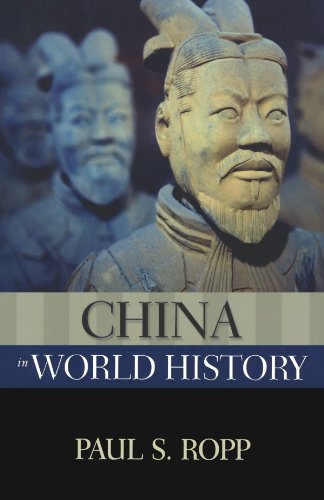 Paul S. Ropp's "China in World History" is an introduction to Chinese history aimed at a general readership. It is a nice book but focuses too much on the presentation of factual information and lacks an overall argument.

This is a volume in the New Oxford World History series. According to the Editor’s Preface, the aim of this series is to "offer readers an informed, up-to-date and lively history of the world" that avoids the ethnocentric bias of traditional "world histories" of only focusing on Europe and the United States. This series contains three types of books. First, eight books in the series deal with different periods in world history. Second, certain volumes concern world history using a thematic perspective, focusing on topics such as city, democracy, technology, migration, etc. Finally, there are books that deal with specific countries or regions, and Paul S. Ropp's China in World History belongs to this category.

... the book is a helpful introduction for anyone unfamiliar with Chinese history.

In the book, Ropp states that his goal is to provide an account of Chinese history that places China in a global context. To do this, he focuses on China's historical interactions with foreign countries and compares aspects of Chinese society with others around the world. The book is divided into nine chapters that examine Chinese history in chronological order. Chapter One deals with the earliest periods up to the 3rd century BCE. Chapter Two describes the Qin and Han dynasties (221 BCE - 220 CE). Chapter Three explores the period of disunity from 220 to 589 CE. Chapter Four examines the reunification of China under the Sui and Tang dynasties (618 - 907 CE). Chapter Five recounts events during the Song and Yuan periods (960 - 1368 CE). Chapter Six looks at the early modern period of the Ming and early Qing dynasties (1368 - 1800 CE). Chapter Seven describes the fall and aftermath of the Qing dynasty (1800 - 1920 CE). Chapter Eight deals with the period from 1920 to 1949 and looks at the civil wars, the Japanese invasion, and the rise of the Communist Party. The last chapter is about the People’s Republic of China from 1949 to today.

As would be expected in a book that is less than 200 pages long, none of these topics are studied in great depth. The writing, however, is very clear, concise, and digestible. With around 25 photos and maps, the book is a helpful introduction for general readers who are unfamiliar with Chinese history. Ropp was a professor of history at Clark University before his retirement, and he has written and edited many books on Chinese history. With this background, Ropp is well qualified to pen an introductory history book for a general audience.

The main criticism, and this may relate more to the overall aim of the book series rather than to the shortcomings of Ropp's book specifically, is that the book contains lots of factual information but is short on interpretation and analysis. When approaching a book full of facts, it is easy to forget these facts very shortly after reading the book. It is the interpretation, the author's explanation for why some facts are more valuable than others, that tends to stay with the reader. Of course, sometimes authors' interpretations could be controversial, and the series editors may have wished to avoid controversies in a series that is aimed at being an introduction to topics in history. On the other hand, a lack of an overall argument or thesis may explain why the author does not fully achieve the goals he has set for himself. From the perspective of the book's main readership - a general audience - the book's writing style and tone make it an enjoyable read for a source providing fundamental knowledge on Chinese history.

$22.93
free shipping worldwide
$18.45
plus shipping
By purchasing books through this website, you support our non-profit organization. World History Encyclopedia receives a small commission for each book sold through our affiliate partners.

Achievements of the Han Dynasty

$22.93
free shipping worldwide
$18.45
plus shipping
By purchasing books through this website, you support our non-profit organization. World History Encyclopedia receives a small commission for each book sold through our affiliate partners.