The Failures of Philosophy: A Historical Essay 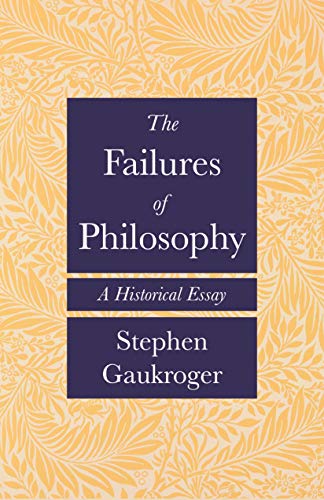 Stephen Gaukroger, Emeritus Professor of History of Philosophy and Science at the University of Sydney, presents a fresh viewpoint toward examining the history of Western philosophy. His book The Failures of Philosophy: A Historical Essay is an extensive project stretching from Western philosophy during the pre-Socratic era until the nineteenth century. What spotlights Gaukroger’s book is that it uniquely proposes a perspective to examine when philosophy was unsuccessful in answering its own questions throughout history. The book uses such a broad timeline that readers feel like they are on a rollercoaster departing from Plato and ending at Martin Heidegger. The general readership will find this book a challenging and complex read. Gaukroger’s writing style and the demand for readers’ existing knowledge make the book more suitable for philosophy and history scholars. Still, regardless of whether one finds it difficult to read, the book will turn out rewarding.

By “failure,” Gaukroger does not mean how one specific school of philosophy lost popularity, but how the whole concept of philosophy was shaken by questions that it could not answer. Gaukroger believes that, from ancient Greece to nineteenth-century Europe, Western philosophy faced destruction three times, dividing the history of Western philosophy into three epochs: the ancient, the theological, and the early modern.

...Gaukroger concludes that the Western philosophy we see today is actually quite young since it found its source only around three centuries ago.

Accordingly, the book has three parts. Part I discusses how, around the fifth and sixth centuries BCE, Greek philosophy transitioned from mythology-based thinking to reason-based thinking. This turned philosophy into what Gaukroger calls “second-order inquiry,” where we study the “philosophy of something” but not “philosophy” itself. Gaukroger identifies Plato as a main figure of the “ancient” epoch, where philosophy was the tool to offer self-understanding and search for a good life. Ancient philosophy, however, failed to reach an answer. What replaced it was a theological—or Christian—approach. Around the fourth century CE and influenced by authors like Tertullian and Augustine, Christianity repackaged existing thoughts and launched the second epoch: to derive a metaphysics that could explain all natural phenomena. Part II examines the uprooting of theology when Aristotelianism revived during and after the Renaissance. Thinkers like René Descartes and David Hume became popular, and they fed into the early modern Western philosophy. Part III talks about how a key early modern figure, Immanuel Kant, failed to find a universal philosophical trend. Kant’s failure was significant because his earlier attempts brought non-philosophical subjects—such as science—into philosophy. These external subjects are difficult to remove once added. Science, eventually, guided pure abstract philosophical thoughts.

Gaukroger is no stranger to the ways philosophy interacts with other subjects. He wrote the successful four-book series titled Science and the Shaping of Modernity, a study of how science and ideology together forged contemporary Europe. After identifying the three epochs, Gaukroger concludes that the Western philosophy we see today is actually quite young since it found its source only around three centuries ago.

Not all history and philosophy scholars will agree with Gaukroger’s breakdown of the history of Western philosophy, but Gaukroger raises important questions that will benefit all. How can philosophy maintain itself as an independent and self-sustaining field while being a “second-order inquiry”? What makes philosophy vulnerable? This book is a thought-provoking 316-page intellectual journey despite not having any images or graphs. For a simplified journey, the book’s Introduction summarizes Gaukroger’s thesis and plan for the book quite clearly. When our modern internet and technology overload us with information and ideas, it is urgent to review how philosophy dealt with challenging times before.

$29.46
free shipping worldwide
$28.49
plus shipping
By purchasing books through this website, you support our non-profit organization. World History Encyclopedia receives a small commission for each book sold through our affiliate partners.

Ancient Greek philosophy is a system of thought, first developed...

$29.46
free shipping worldwide
$28.49
plus shipping
By purchasing books through this website, you support our non-profit organization. World History Encyclopedia receives a small commission for each book sold through our affiliate partners.