Warriors of Japan: As Portrayed in the War Tales

by Graham Squires
published on 02 November 2022 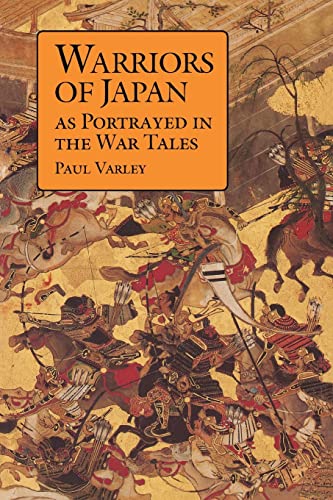 This is an excellent analysis of a genre in Japanese literature known as "war tale." Varley's book is very well written despite the subject matter being inherently difficult. The book is aimed at anyone with an interest in the history of Japanese warriors.

Paul Varley, who passed away in 2015, was a professor of Japanese history at Columbia University for many years before coming to the University of Hawai’i. He specialized in the Kamakura and Muromachi periods. Varley's book, Warriors of Japan: As Portrayed in the War Tales, deals with a specific genre of Japanese literary work from his history specialty.

Japanese literature from the Nara and Heian periods mostly focused on the lives of the court aristocratic class, but, with the rise of the samurai class, a new style of writing called "war tales" emerged to reflect warrior values. War tales have two important scholarly values. First, they contain key historical information that is often absent in other sources. Second, they form an influential strand in Japanese literary traditions that successive generations of writers have drawn upon for inspiration. While Japanese war tales are significant primary sources, modern readers tend to perceive them as dull to read. In addition, like many historical texts and documents, the meaning of war tales is not always clear. For that reason, Varley's book is extremely valuable because it goes through the major war tales and provides complementary descriptions and explanations for these texts.

While the book is not an easy read due to the subject matter's inherent complexity, Varley's own writing is clear and concise.

While the book is not an easy read due to the subject matter's inherent complexity, Varley's own writing is clear and concise. Besides an introduction and conclusion, the book's five chapters deal with war tales in roughly chronological order. Chapter One discusses ancient war tales like Shomonki and Mutsu Waki. Chapter Two looks at the early medieval war tales Hogen and Heiji. Chapter Three is devoted to The Tale of the Heike. In Chapter Four, Varley studies Yoshitsune, which describes the brother of Minamoto no Yoritomo, founder of the Kamakura shogunate. Chapter Five focuses on the Taiheiki ("The Chronicle of Great Peace"). Moreover, Varley's book contains eight pages of colored photos and a similar number of black-and-white images.

Varley characterizes Japanese war tales as "literary histories" that mix fact and fiction. For many centuries, the tales were regarded as reliable accounts of the events they describe. Modern research, however, has shown that this is not the case. The tales were often written decades, or even centuries, after the depicted events. Each chapter of Varley's book follows a similar format. He begins by describing the historical setting and exploring questions of authorship. Then he explains the structure of the text before highlighting what he thinks are the most significant aspects of a tale. It is this last chapter section that is the most insightful. For example, one aspect of war tales examined by Varley is the idea of "loyalty," something conceptualized differently depending on the war tale.

Using The Tale of the Heike as an example, which is an account of the war between the Taira and Minamoto clans in the 12th century, loyalty is praised very generically. In contrast, in Taiheiki, an account of the overthrow of the Kamakura bakufu and the Kenmu Restoration in the 14th century, it is loyalty to the imperial family that is valued above all else. The great heroes in Taiheiki include Kusunoki Masashige and Nitta Yoshisada, who sacrificed their lives for the emperor while knowing it was a lost cause. This story attracts more audience than just antiquarians. In subsequent centuries, the "failed loyalist hero" became one of the most important tropes in Japanese literature, theatre, and film. It was important in politics as well. In the Meiji period, for instance, Kusunoki was held up as a shining figure representing imperial loyalism when the government promoted a nationalist ideology that was consistent with the cult of the imperial family.

$16.56
plus shipping
By purchasing books through this website, you support our non-profit organization. World History Encyclopedia receives a small commission for each book sold through our affiliate partners.

War tales (gunki monogatari) is a genre of historical writing that...

$16.56
plus shipping
By purchasing books through this website, you support our non-profit organization. World History Encyclopedia receives a small commission for each book sold through our affiliate partners.