by Graham Squires
published on 25 October 2022 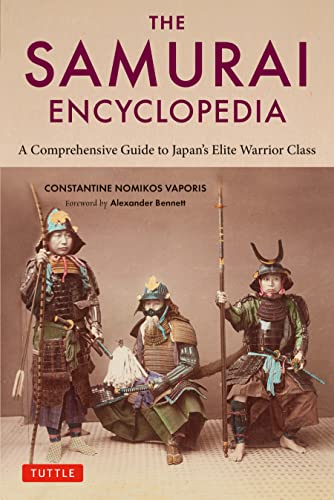 This is a paperback edition of a book that was first published as a hardback in 2019. The author, Constantine Nomikos Vaporis, is a professor of history at Maryland University and has published several academic books on Japanese history. As the title suggests, The Samurai Encyclopedia: A Comprehensive Guide to Japan's Elite Warrior Class is an encyclopedia rather than a standard cohesive text. It contains more than 100 entries about samurai and samurai culture grouped under the following topics: people, material culture and samurai practices, social organizations/groups, events, texts and institutions, and systems. As the author notes in the preface, samurai frequently appear in various kinds of popular culture - such as movies, anime, and manga - but there is a surprising lack of historical scholarship on the topic in English.

...Vaporis writes that his aim is to provide an overview of samurai history for general readers.

In the book, Vaporis writes that his aim is to provide an overview of samurai history for general readers. In this he is successful: the essays are easy to read, well-researched, and informative. The book is more than 400 pages long and contains more than 120 archived photos, including over 60 colored images. This is unusual for a book in this price range. While the book is an enjoyable read, using an ‘encyclopedia’ format might not be the best way to present the material. To grasp the meaning of the individual entries, it might be better if the reader already has existing knowledge of Japanese history, and this may not necessarily be the case with the general readership. An alternative format would have been to write a more standard narrative history that could link the separate entries together. As Vaporis notes, the book's topic is extremely broad and the space in this book is limited, so he had to make some hard choices on what material he should leave out.

Vaporis mainly focuses on the Edo period, and there is little material on the samurai in earlier periods. In this regard, as far as encyclopedias go, having an online format can eliminate space constraints and allow the author to update the entries easily. One of the difficulties of studying samurai history is that, in popular tales, fact and fiction are often liberally interwoven. The mythologizing of samurai began in ancient war tales such as Heike Monogatari ("The Tale of the Heike") and Taiheiki ("The Chronicle of Great Peace"). It continued in the Edo period in Japanese puppet and kabuki theatres. The mythologized images of samurai culture gained pace after the abolition of the samurai class in the 1870s because the abolition made story writers no longer constrained by the existence of real samurai.

A theme in recent historical scholarship has been the debunking of much of this mythology. In general, Vaporis's book reflects this theme. For example, one of the most popular beliefs about samurai is that they lived by an ethical code called ‘bushido’, or ‘the way of the warrior’. As Vaporis notes, this was something largely made up under the influence of European ideas in the Meiji period. Another popular idea is that, in the Edo period, samurai had the right to strike down any commoner they felt had shown them insufficient respect. Vaporis points out that, while this right may have existed, the circumstances where a samurai could use this right were extremely limited. Ironically, although warriors governed Japan in the Edo period, it was probably a more peaceful place than countries such as the United States in the 21st century.

$22.63
free shipping worldwide
$24.63
plus shipping
By purchasing books through this website, you support our non-profit organization. World History Encyclopedia receives a small commission for each book sold through our affiliate partners.

Edo Castle was a large castle built by the Tokugawa family in 17th-century...
Definition

$22.63
free shipping worldwide
$24.63
plus shipping
By purchasing books through this website, you support our non-profit organization. World History Encyclopedia receives a small commission for each book sold through our affiliate partners.