Inventing the Way of the Samurai: Nationalism, Internationalism, and Bushidō in Modern Japan (The Past & Present Book Series)

by Graham Squires
published on 14 October 2022 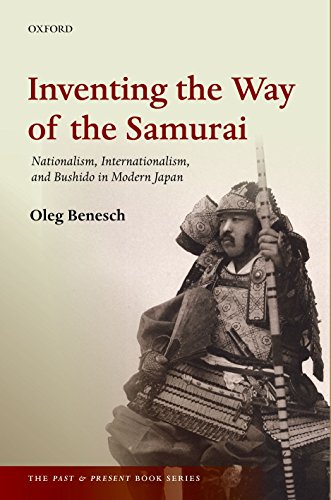 This is a really interesting book on the idea of 'bushido' in Japanese history. The author argues that bushido is an example of an 'invented tradition' - something which is thought to be old when, in fact, it is quite new.

Japan is known for many different things, but one popular image associated with the country is that of the ‘samurai’. Especially, many people admire the idea of the ‘samurai spirit’ encapsulated in the concept of ‘bushido’ – the ‘way of the warrior’. The image people have of samurai is often drawn from movies and TV shows or from the culture associated with the martial arts. What many fail to understand, however, is that the way samurai are portrayed often has very little to do with historical reality. In fact, the idea of ‘bushido’ itself was something made up in the Meiji period, after the samurai class had actually been abolished. How this happened is the subject of the book Inventing the Way of the Samurai: Nationalism, Internationalism, and Bushido in Modern Japan by Oleg Benesch, Professor of East Asian History at the University of York.

Benesch argues that ‘bushido’ is an ‘invented tradition’ - something which is thought to be old when, in fact, it is quite new. After Japan opened its doors to foreign contact in the Meiji period, Japanese historians were keen to find similarities between the history of Japan and that of Europe. The period of warrior rule in Japan from 1185 until 1868 seemed to resemble the ‘feudalism’ of Medieval Europe, and the mounted samurai of the Kamakura and Muromachi periods seemed to resemble European knights. Seeing these similarities, Japanese historians went looking for something comparable to the European idea of ‘chivalry’, and they found it in the concept of ‘bushido’.

Benesch especially notes the disconnection between the thoughts and behaviours of real samurai and the idea of ‘bushido’.

In the first chapter, Benesch deals with the final years of the Edo period including the thought of Yoshida Shoin and Yokoi Shonan. Benesch especially notes the disconnection between the thoughts and behaviours of real samurai and the idea of ‘bushido’. Chapter Two focuses on modern bushido in the period leading up to the Sino-Japanese War of 1894. Particular attention is given to the thought of Ozaki Yukio. This was an era of increasing nationalism when people were taking greater pride in Japan’s own past because they were less impressed by both Europe and China. Chapter Three examines the way in which bushido played an important role in the nationalist ideology the government fostered between the Sino-Japanese and Russo-Japanese Wars. Here he also discusses the book Bushido: The Soul of Japan by Nitobe Inazo, which is probably the most famous work on bushido in English. Benesch argues that, despite Nitobe’s fame, the little-known scholar-bureaucrat Inoue Tetsujiro was much more influential. Chapter Four takes a look at the period from 1905 to 1912 when the idea of bushido became firmly established and spread to other areas of life such as literature, sport, academia and religion. Chapter Five deals with the Taisho period when there was a sudden decline in interest in bushido. Chapter Six looks at the role bushido played in the period of militarism in the 1930s leading up to the outbreak of the Pacific War. The final chapter examines the idea of bushido in the post-war period. In general in this period the idea of bushido was shorn of its pre-war militarist connotations although it did play an important role in the bizarre suicide by seppuku of the author Mishima Yukio.

In explaining how the popular myth of bushido became so widespread, Benesch emphasises the pliability of the concept and how it came to be constantly reinterpreted depending on the intellectual trends of the day. The text, which doesn't contain any photos, maps or other illustrations, is written in an academic style but, as academic books go, it is reasonably easy to understand. It is quite challenging but well worth putting in the effort for those interested in the topic.

$31.97
plus shipping
By purchasing books through this website, you support our non-profit organization. World History Encyclopedia receives a small commission for each book sold through our affiliate partners.

Edo Castle was a large castle built by the Tokugawa family in 17th-century...
Definition

$31.97
plus shipping
By purchasing books through this website, you support our non-profit organization. World History Encyclopedia receives a small commission for each book sold through our affiliate partners.