The Forty-Seven Rōnin: The Vendetta in History

by Graham Squires
published on 04 October 2022 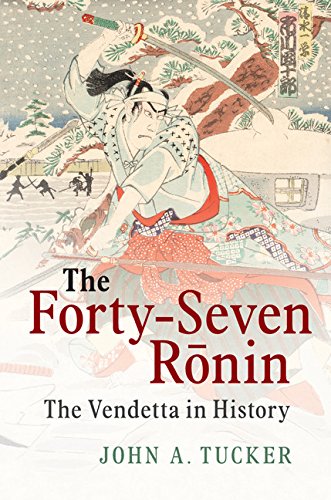 This is a great book which provides a very detailed analysis of the development of the story of the forty-seven samurai and explores its cultural significance. It is written in a clear but academic style which makes it best suited to university-level students.

The story of the forty-seven samurai is a well-known tale not only in Japan but also around the world. There are many different versions but the plot always revolves around a group of warriors carrying out a vendetta in order to get revenge on the man they hold responsible for the death of their lord. In this book, John A. Tucker, Professor of History at East Carolina University, provides a very detailed account of the historical development of the story and discusses its cultural significance.

Books about samurai tend to fall into one of two categories. On the one hand, there are popular accounts that are easy to read but which tend to be rather superficial and reinforce stereotypical images. On the other hand, there are academic works that, while presenting deeper insights based on original research, are more difficult to read. This book definitely falls into the latter category. It is a work of outstanding scholarship but one that would be a challenge for anyone who is not a specialist in Japanese history.

...TUCKER DOES A TREMENDOUS JOB AT ANALYSING AND SYNTHESIZING A GREAT DEAL OF COMPLEX JAPANESE-LANGUAGE MATERIAL AND MAKING IT AVAILABLE TO AN INTERNATIONAL AUDIENCE.

The first four chapters focus on the Ako Incident that took place in 1701-1703 CE. This was a real event in which Asano Noganori, the daimyo of Ako domain, was ordered to commit seppuku (ritual suicide) as punishment for attacking a courtier called Kira Yoshinaka in Edo Castle. After his death, his retainers became ‘ronin’ or ‘masterless warriors’. Forty-seven of these hatched a plan to get revenge on Kira and two years later they attacked his mansion and killed him. After marching to the temple where Asano was buried and presenting the head of Kira as an offering, they were arrested and later ordered to commit seppuku. Tucker provides a very detailed account of these events and critically evaluates the surviving evidence. He emphasises the role Confucian ideas played in the government’s decision to order the death of the conspirators. Chapters seven and eight focus on how the story was retold by subsequent generations. He especially focuses on the puppet play Chushingura, which was first performed in 1748. This play became tremendously popular and, without it, the Ako Incident would probably have been long forgotten. Chapters nine and ten deal with how the vendetta was treated in modern Japanese history.

At the time of the Ako Incident, the forty-seven ronin were executed as criminals but, after the Meiji Restoration, their actions were reappraised and they were held up as exemplars of loyalty. This fits in well with the Meiji government’s efforts to create a new nationalist ideology centred on the idea of loyalty to the imperial family. Chapter eleven describes how the story was reworked in the post-war period. Immediately after Japan’s defeat, the American occupying authorities banned theatrical performances of the story because they thought it was too closely linked to pre-war militarism. Once Japan regained its independence in 1952, however, the popularity of the story once again soared as it was retold in movies and TV shows. Universal Studios even produced a Hollywood version in 2013 starring Keanu Reeves.

Although this book could not be described as light reading, Tucker does a tremendous job at analysing and synthesizing a great deal of complex Japanese-language material and making it available to an international audience. For those interested in the history of Japanese warriors, it would be good to read this work in conjunction with Oleg Benesch’s book Inventing the Way of the Samurai: Nationalism, Internationalism and Bushido in Modern Japan. Although the two books deal with different topics, the content is in many ways complementary.

$23.49
plus shipping
By purchasing books through this website, you support our non-profit organization. World History Encyclopedia receives a small commission for each book sold through our affiliate partners.

The Meiji Restoration was a political event that took place in...
Definition

The Meiji period refers to the period in Japanese history from...

$23.49
plus shipping
By purchasing books through this website, you support our non-profit organization. World History Encyclopedia receives a small commission for each book sold through our affiliate partners.