Dreams of El Dorado: A History of the American West 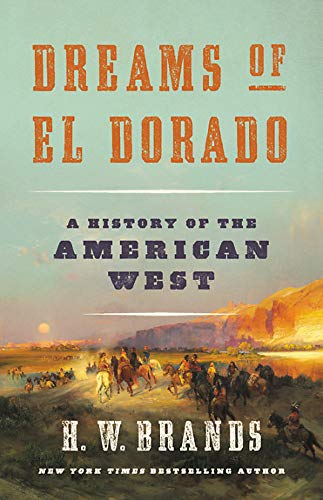 Through "Dreams of El Dorado," H. W. Brands retells the story of American westward expansion during the 19th century using a novelesque writing style that suits mainly the general reader. Brands turns historical characters such as former legislator of the Oregon Territory, Joseph Meek, and James Marshall, who found gold in California, into three-dimensional figures.

El Dorado, the legendary city of gold, is used as an allusion by H. W. Brands in his recent book to describe how 19th-century Americans viewed the land west of the Mississippi River. One could describe the history of the United States with one word: expansion – expanding from Europe to the American East Coast, and from the East Coast to the West. Brands' Dreams of El Dorado tells the history of the 19th-century American West through entertaining writing that might not satisfy professional scholars but will suit the general public who are looking for a leisure non-fiction read.

H. W. Brands, a professor of history at the University of Texas at Austin and a two-time Pulitzer Prize finalist, probably knows more about engaging the general public than many other traditional history scholars. Brands first earned his reputation through writing 20th-century American history and biographies of figures such as Woodrow Wilson and Theodore Roosevelt. With this background, it is understandable how Brands gives Theodore Roosevelt special attention regarding the American West, mentioning the 26th President of the United States in the opening and ending of the book.

Brands argues that the American West represents dreams and hopes for a better future. In Brands' words:

In American history the West had always represented opportunity; the West was the peculiar repository of American dreams. (479)

This premise influences the historical stories Brands includes in his book: mainly white middle-class American Easterners. Native Americans, the people suffering because of the chase for opportunity, receive comparatively less attention in the book. Such a scholarly approach to the history of the American West has been criticized by historians such as Patricia Nelson Limerick. Limerick's book, The Legacy of Conquest: The Unbroken Past of the American West, disproves many premises set by Frederick Jackson Turner, whose 1893 essay The Significance of the Frontier in American History marked the beginning of the scholarship on the history of the American West. However, due to flaws such as the lack of attention to Native Americans and one-sided ideology favoring Easterners, Turner's scholarship is now obsolete.

Dreams of El Dorado's shining point is its enjoyability. Divided into 53 short chapters, the book is A research in a novel's clothing.

The book spends much time reciting existing scholarship on the American West; thus it is not as helpful to professional history scholars as some comparable titles like the work by Limerick or The American West: A New Interpretive History (co-authored by Robert V. Hine, John Mack Faragher, and Jon T. Coleman). These two books offer a more diverse range of perspectives. Books focusing on specific events or themes in the 19th-century American West are also good alternatives for scholars, like those by David M. Wrobel or William Cronon.

Dreams of El Dorado's shining point is its enjoyability. Divided into 53 short chapters, the book is a research in a novel's clothing. Brands extensively uses direct quotations – sometimes even dialogues – and movie-like descriptions to replay the lives of historical figures such as John Jacob Astor and Brigham Young. If a reader is looking for a light history read for entertainment purposes, Dreams of El Dorado fits that goal.

$32.38
free shipping worldwide
$17.69
plus shipping
By purchasing books through this website, you support our non-profit organization. World History Encyclopedia receives a small commission for each book sold through our affiliate partners.

El Dorado ('Gilded Man' or 'Golden One') referred to the legendary...
Article

Slavery was practiced by the Native Americans before any Europeans...

$32.38
free shipping worldwide
$17.69
plus shipping
By purchasing books through this website, you support our non-profit organization. World History Encyclopedia receives a small commission for each book sold through our affiliate partners.