by Kelly Macquire
published on 01 September 2021 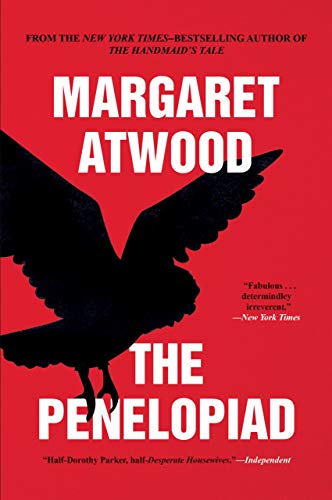 The Penelopiad is a retelling of the Odyssey from the perspective of Penelope from the Fields of Asphodel. She is reminiscing about her life from her childhood, through her 20 lonely years to her afterlife all whilst commenting boldly on the events and the people throughout her life. This book is also partially from the perspective of the twelve maids who were hanged in book 22 of the Odyssey and convey their story through poetry, a short play, and a mock trial.

The Penelopiad by Margaret Atwood is a retelling of the life of Penelope, and the fate of the 12 maids from the Odyssey. In this contemporary tale, Atwood delves into the question of why were the twelve maids hanged and what led up to their fate? The story is told primarily from the perspective of Penelope, dead in the underworld, retelling her life on earth with interjecting sections from the point of view of the maids. These interjecting sections are told in a number of different forms including poetry, a trial, a play, and a love song. Penelope’s tale takes us from her birth, childhood, and marriage to Odysseus, through her 20 lonely years to her life after Odysseus returned, and her afterlife. Atwood has filled in the gaps with how she believes Penelope may have been acting and what she may have been feeling throughout her life, and while using the maids as a sort of tragic chorus, commentating on their lives, Penelope, and their hanging.

I definitely enjoyed reading this, but there were a couple of things that caused the loss of two stars in my rating. I had really high hopes for this book, but I was slightly underwhelmed. I think I am partially to be blamed for this because there really is not that much to work with from Penelope’s point of view from ancient texts, with her letter in Ovid’s Heroides as the only one that comes to mind. What we get is a retelling of the tale of the Odyssey from Penelope who is dead, and she is not as much of a subservient wife as she was on earth.

The book felt like a modern commentary of the ancient story which was supported by Atwood’s use of modern language & having Penelope dead, in the present.

She aims much of her criticism at Odysseus, Telemachus, and Helen. While I think that Odysseus and Telemachus deserve the way Penelope described them (especially Telemachus who is rude and disrespectful), for a feminist retelling, I was incredibly surprised with the depiction of Helen. Penelope did not hold back with her scathing remarks about her vain, attention-loving, husband-deserting cousin, and I found it truly unbelievable in a contemporary retelling. That is the kind of stance on Helen that I am used to reading in myths from antiquity. As a woman in the 21st century reading the Odyssey and any other myth relating to the abduction of Helen by Paris of Troy, I firmly believe she was damned if she did and damned if she did not. So, we have Penelope reminiscing about her life, with Atwood making some speculations about how she may have reacted in some situations which felt a bit forced and unbelievable. But overall, I liked Atwood’s attempt at reconstructing how Penelope may have lived without her husband for 20 years.

However, this was not purely focussed on Penelope and her newfound boldness in death but also on the fate of the twelve maids who were hung in book 22 of the Odyssey. I really loved many of the sections from the point of view of the maids, they were poignant and gut-wrenching, and the use of different forms like poetry and play format added to the tragedy. I also loved the idea of the maids being like the chorus of a Greek tragedy, adding in their commentary. It added an extra dynamic to what would have been a fairly dull and speculative story. The hanging of the twelve maids in the Odyssey often comes as a bit of a shock, and prior to their deaths, they are made to clean up the carnage left after Odysseus had killed all of the suitors that were eating him out of house and home. The women were killed because they had betrayed Odysseus by sleeping with the suitors without his permission (their master who had been gone for 20 years). Atwood makes it explicit that it was rape, and these women had absolutely no choice in the matter (but apparently Helen did???), and continuously questions the reason for their deaths. They haunt Odysseus. He deserves to be haunted.

Many times whilst I was reading this, I noted that it felt like a modern commentary of the ancient story which was supported by Atwood’s use of modern language and having Penelope dead, in the present. She makes many comments about modern physics and spirits using telephone wires to travel and things like this, which were quite jarring. I liked that Atwood highlighted the evolving beliefs and rituals attributed to the afterlife, which could also be said about the view of women in general, but I felt she took it a bit too far that it felt disconnected from the overall story. So, as you can see, I have conflicting thoughts over this, but overall it is an interesting take on the Odyssey, from the point of view of Penelope and the twelve maids.

$9.43
plus shipping
By purchasing books through this website, you support our non-profit organization. World History Encyclopedia receives a small commission for each book sold through our affiliate partners.

Helen of Troy (sometimes called Helen of Sparta) is a figure from...
Definition

Homer's Odyssey is an epic poem written in the 8th century BCE...

$9.43
plus shipping
By purchasing books through this website, you support our non-profit organization. World History Encyclopedia receives a small commission for each book sold through our affiliate partners.
Remove Ads