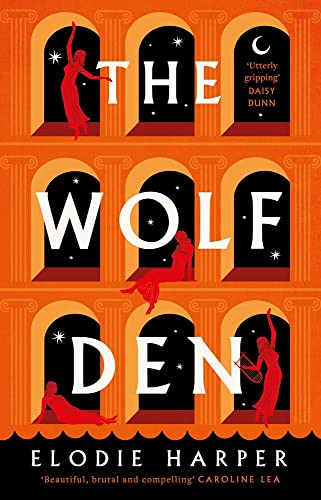 The Wolf Den is a novel by Elodie Harper which is set in Pompeii in the 1st century CE. The novel follows the point of view of Amara, a Greek woman born into a middle-class family who ended up as a prostitute in Pompeii and works at the Wolf Den with four other women. This book intertwines graffiti found at Pompeii and ancient writings of Pliny and Ovid into a rich story about the harsh reality of women's lives in the ancient world.

The Wolf Den is a novel by Elodie Harper which is set in Pompeii in the 1st century CE in Pompeii’s lupanar which is the brothel of the ancient city. The term lupanar could mean both brothel or wolf den, and the term lupa could be used for both a she-wolf or a prostitute. The novel follows the point of view of Amara, a Greek woman born into a middle-class family, who had to be sold after her father died. She ended up as a prostitute in Pompeii and works at the Wolf Den with four other women. However, Amara has not just accepted the misfortune which life has thrown her and wants more than anything to be free. This novel, which is the first of a trilogy, follows Amara as she does whatever it takes to change her fate.

The skill of the fighters, the grace of the tigers, all of it is punctuated by acts of savagery. (217)

Before we get into my ~many~ thoughts and feelings concerning this book, let us have a look at Pompeii, Pompeiian graffiti, and Venus Pompeiana first. Pompeii is probably one of the most well-known ancient cities along with places such as Rome and Athens, but it differs from many ancient cities because in 79 CE, the local volcano known as Vesuvius, erupted, and covered the city and its occupants in lava and ash. It would have been a catastrophic event for those in the ancient world, but it has proven to be invaluable to modern historians and archaeologists as an untouched insight into the daily lives of the Romans who lived in the city, and the neighbouring city of Herculaneum.

Graffiti from Pompeii truly shows us that humans really have not changed in 2,000 years.

Excavations at Pompeii have informed our understanding of life in the city in a way that no other site could. The volcanic eruption has preserved architecture, Roman mosaics and wall paintings, bronze statues (which in any other circumstance probably would have been melted down and repurposed), houses, baked goods (look up Pompeii bread!), and writing which has been found in wax tablets, pottery, seals, tomb inscriptions, and probably most interestingly; graffiti. The survival of graffiti from Pompeii is, in my opinion, equally as fascinating as the wall paintings, as it truly shows us that humans really have not changed in 2,000 years. It makes the ancient world feel a lot more familiar and close. If you do not believe me, I am going to add some graffiti found at Pompeii (all in translation from usually Latin or Greek). Let me know if any of them sound familiar! (All graffiti quotes have been cited from POMPEII: A sourcebook by Alison E. Cooley and M. G. L. Cooley, 2004.)

Latin poetry composed on the walls:

What is happening? Alas, eyes, first you led me into the fire,

Now of your own accord you give generously to your cheeks.

But tears cannot put out the flame;

They inflame the face and melt the spirit.

The Pompeii equivalent of "Kelly Was Here": "Gaius Pumidius Dipilus was here, five days before the nones of October when Marcus Lepidus and Quintus Catulus were consuls." (77)

And last but not least, graffiti about graffiti: "I admire you, wall, for not having collapsed at having to carry the tedious scribblings of so many writers." (79)

Why is graffiti so important, you ask? Well, for The Wolf Den, in particular, Elodie has drawn names and situations from graffiti found at Pompeii, and woven them into her story. She has used names of prostitutes and even a name of a gladiator in her story, which is not only incredibly unique, but executed flawlessly.

She wants to scream her rage into the night… Her anger is rising like the sea, drowning her. She has to get out. (284)

The goddess Venus held a special place in Pompeii as the guardian deity of the city and is sometimes referred to as Pompeian Venus. In The Wolf Den, Venus is an important deity, since she is the Roman goddess of love, beauty, sex, fertility, and prostitution. In April, the festival known as the Vinalia was celebrated which was held in honour of Jupiter and Venus. Common girls and prostitutes would gather to the temple of Venus to offer her myrtle and mint and ask for things such as beauty, popular favour, to be charming or witty.

This book is an absolute masterpiece, and from the moment I started reading it, I found it incredibly challenging to put it down. Not only did Elodie create a phenomenal story rooted in archaeological evidence, but she also explores so many themes and issues that would have been prevalent in the ancient world at the time this novel was set. Overall, Elodie makes the reader realise just how dangerous and difficult it would have been to be a woman in the ancient world.

There’s nothing more truthful than a play, is there… I think comedies are braver somehow. All of life up there on the stage, and actors have the courage to say what one cannot say elsewhere. (257)

The complexity of the story that Elodie has created is completely awe-inspiring and incomparable. It did not remind me of anything else I have ever read. Using names left scratched on the walls of Pompeii, Elodie took them and created a new story for them, one which was as equally uplifting as it was savage. Our main five girls are all bonded in a way that no one else could possibly understand, and yet they are all constantly working against each other (in a way) to make money and live. Elodie definitely puts an emphasis on the unbreakable friendship these women have forged through their shared experiences as prostitutes at the Wolf Den, they know each other's weaknesses and traumas and do what they can to shield each other and keep each other safe in a world that is working so hard to break them.

Elodie has an ability with words to cut deep and do it succinctly.

Elodie has an ability with words to cut deep and do it succinctly. She does not use unnecessary words to make a point, her language is blunt, brutal, and wholly truthful. She has truly enlightened her readers on how the world would have been perceived by a woman sold as a prostitute in the ancient world. These experiences Amara and her friends experience strike me as completely real and it honestly gave me chills. It reminds you how much more brutal the world was, especially for women, and she does not try and soften that. She presents it raw and uncut. You feel completely immersed in the city of Pompeii. You can feel the suffocating bustle of the women at the Vinalia, you can feel the comradeship of the women as they move through the streets, and you can feel their terror, their hatred, their relief, and their love. It is wholly encapsulating.

Warmth spreads through her. She has never had a friend like Dido. She is the light in the darkness of her life. (199)

Other than the focus of women supporting women, even beyond our main characters, is the idea of a human being viewed as an object, and men’s incomprehensible inability to view women as anything more than objects. When I read Classics For Plebs review of this book, she made the observation that this book forces you to come to terms with the fact that women were sold into slavery daily. These women were not necessarily always prostitutes, and it shifts the focus of the reader to the fact that these women have absolutely no control over their bodies and their lives, and it was something happening to women all over the ancient world. Our main characters, our point of view for this entire story, the basis of this entire novel is the fact that these women do not have ownership over their own bodies or their lives. They are literally owned by men, and they are treated by the man that owns them, and 99% of men in this story, as if they are nothing more than a mindless object to be used, abused, and then discarded.

But although they’re talking about her, they’re only talking to Felix, as if she isn’t really there (316)

You invested in quality stock then. Not got any virgins, I suppose? (305)

This story is less focussed on the plot and more on the characters and their relationships with others. As the plot continues, the characters develop and new people are introduced, and new relationships are formed, It is not an event-heavy book and is focussed on the lives and experiences of Amara and her fellow she-wolves. It is beautifully written and truly gives a raw insight into what it would have been like to be a woman in the ancient world. These women were once real, and Elodie has composed such complex lives for them that it is completely and utterly believable. If you are thinking you might want to pick up this book, this is your sign to do so!

A Visitor's Guide to Herculaneum

In the first part of our new travel series devoted to the archaeological...
Definition

In Roman mythology, Venus was the goddess of love, sex, beauty...
Interview

In this interview, World History Encyclopedia is joined with Elodie...

By purchasing books through this website, you support our non-profit organization. World History Encyclopedia receives a small commission for each book sold through our affiliate partners.
Remove Ads