The Book of Five Rings

by Kelly Macquire
published on 09 April 2021 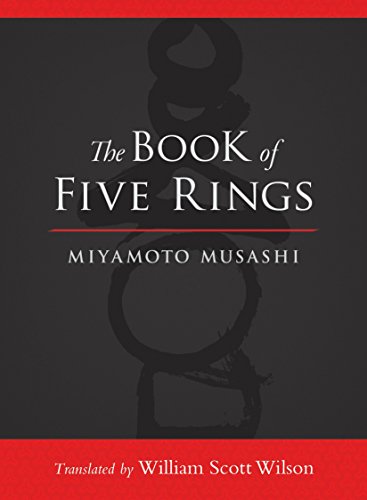 The Book of Five Rings by Miyamoto Musashi is a manifesto detailing his expertise in swordsmanship, strategy, strategic thinking, and winning. Translated by William Scott Wilson, The Book of Five Rings explores Musashi's advice on what to do, and what not to do in the face of an opponent versed in the skill of martial arts. This book has been translated in a way to make Musashi's advice clear, easy to follow, and engaging, and is appropriate for a general audience.

Miyamoto Musashi was born in either the Harima Province of Japan or the village of Miyamoto in Mimasaka in 1584. Little is known about the life of Musashi, but what has been pieced together from a small number of reliable sources has highlighted his inability to lose a fight. Musashi is remembered as an undefeated samurai and won his first fight against the swordsman Arima Kihei at 13 years old. From then until the day he died, he was victorious in every battle he fought in, and it was close to the end of his life that Musashi wrote down his Way of the martial arts, and it was in 1645, at the age of 62, that the great swordsman passed away.

The Book of Five Rings is an easy to read and enjoyable translation of Musashi’s manifesto which is split into five books, ‘The Earth Chapter,’ ‘The Water Chapter,’ ‘The Fire Chapter,’ ‘The Wind Chapter,’ and ‘The Emptiness Chapter,’ and is accompanied by a detailed introduction, accompanying notes to each chapter, and a bibliography. The Introduction by William Scott Wilson orients the reader well and provides all of the background knowledge needed both on Miyamoto Musashi and his life and the time period in which Musashi was living and writing.

Each section in Musashi’s manifesto has been written to address different aspects of Musashi’s ‘Way’ of the martial arts.

Each section in Musashi’s manifesto has been written to address different aspects of Musashi’s ‘Way’ of the martial arts. The Earth Chapter is the opening section which provides an overview of his Way of the martial arts. The second chapter is The Water Chapter, which uses water as a model for the mind and focusses on the swordsmanship of his Way. Musashi states that "you should consider these principles as though they were discovered from your own mind, and continually make great efforts to make them a physical part of yourself" (30), and then continues the chapter detailing different strategies for attacking your opponent in different situations. He also stresses the importance of the mind and the body; specifically, the eyes, hands, feet, head, neck, and posture when learning the Ways. The use of a sword is a full-body experience.

The third chapter is The Fire Chapter, which focusses on the matter of battle because, like fire, battles can be small or large. Musashi takes into consideration the best placement of light, using your surroundings to your advantage, and strategies in using your mind during battle. The Wind Chapter comes next, which is not about Musashi’s Way, but the issues of various other styles and martial arts, and what makes his Way superior. The final chapter is the Emptiness Chapter, which is the shortest section, which Musashi has written "so that you might naturally enter the Way of Truth" (15).

Miyamoto Musashi’s The Book of Five Rings, translated by William Scott Wilson is an excellent and easy-to-follow text for anyone interested in martial arts and the strategic thinking of an undefeated samurai. Featuring illustrations of Japanese crests throughout, this book is visually pleasing and an enriching read.

$19.95
free shipping worldwide
$17.96
plus shipping
By purchasing books through this website, you support our non-profit organization. World History Encyclopedia receives a small commission for each book sold through our affiliate partners.

The medieval period of Japan is considered by most historians to...

$19.95
free shipping worldwide
$17.96
plus shipping
By purchasing books through this website, you support our non-profit organization. World History Encyclopedia receives a small commission for each book sold through our affiliate partners.