The Emperors of Rome: The Story of Imperial Rome from Julius Caesar to the Last Emperor 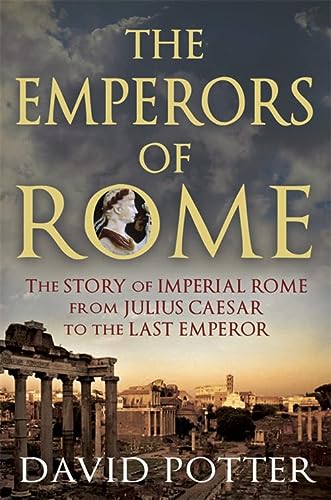 Written for a general audience, The Emperors of Rome by David Potter traces the rise and the fall of the Roman Empire. Giving prominence to emperors who played a major role in the Roman history, the narration mentions all emperors to have asserted the title of Augustus, while recounting briefly the socio-economical and religious background of the empire through the ages.

The Emperors of Rome: The Story of Imperial Rome from Julius Caesar to the Last Emperor, by David Potter, tells the story of all the emperors of Rome from Augustus Caesar to Romulus Augustulus. Narrated with a general audience in mind, David Potter, Professor of Greek and Latin in Ancient History at The University of Michigan, starts off his narration with a brief background to Roman emperors; an account on what was needed to become an emperor of Rome and what role they played as a political as well as a social figure. These “qualifications” needed to be the emperor, mentioned in the introductory note are being revised as the book progresses with the changes in the form and the function of a Roman emperor.

The story proper starts in the third chapter with a brief account on the first civil war between Marius and Sulla and the events that unfolded thereafter leading to the rise of Augustus Caesar. From there on, David Potter tells the story of one emperor after the other, describing in detail what each emperor had to do to get and remain in power as well as the relationships that existed among the emperors and their successors. This style of narration gives the reader an interesting view of the Roman political arena and what it took to survive it.

In the second part of the book, Potter pauses the main narration to focus briefly on the socio-economical atmosphere of Rome at the time. He describes the political hierarchy, methods of taxation, the hierarchy of the Roman army, religion, and citizen life. This adds a different dimension to the book and saves it from being a highly political, dry narration of one emperor after the other and better enable the reader to get a larger picture of the Roman Empire.

The style of narration gives the reader an interesting view of the Roman political arena & what it took to survive it.

The writer also gives prominence to other important personalities of the times such as the Praetorian Guard, military commanders, wives and mothers of emperors, and in few cases empresses in their right who played a major role in the contemporary politics.

In the concluding part of the narration, Potter emphasizes the lack of cooperation between the Eastern and the Westerns Roman Empires and gives introductions to the many “barbarians” who threatened the empire resulting in its eventual fall.

The book is subdivided into many chapters each with its title hinting at its content. Some would find this subdivision helpful but for some, it could be a disturbance to the continuous narration of the story. David Potter closely follows the accounts on Roman history by ancient writers such as Pliny the Younger, Tacitus, or Cassius Dio, and later historians such as Edward Gibbon. He brings up their opinions about certain matters and gives his own as well, creating a conversation across time.

I would highly recommend this book to anyone who wants to get an overview of the rise and fall of the Roman Empire and its social and economic changes across time. While this could be not so informative for scholars of classics, the book certainly is a treasure to those who are just entering the world of classics.

$17.37
plus shipping
By purchasing books through this website, you support our non-profit organization. World History Encyclopedia receives a small commission for each book sold through our affiliate partners.

The Assassination of Julius Caesar

Veni, vidi, vici! This was the simple message the Roman commander...
Definition

Roman emperors ruled the Roman Empire starting with Augustus in...

Potter, D. (2019, October 01). The Emperors of Rome: The Story of Imperial Rome from Julius Caesar to the Last Emperor. World History Encyclopedia. Retrieved from https://www.worldhistory.org/review/219/the-emperors-of-rome-the-story-of-imperial-rome-fr/

$17.37
plus shipping
By purchasing books through this website, you support our non-profit organization. World History Encyclopedia receives a small commission for each book sold through our affiliate partners.