Great Generals of the Ancient World 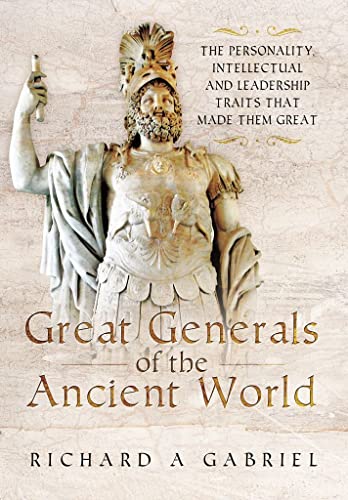 Though attempting to highlight who he perceives to be the greatest generals in the ancient world, Richard Gabriel's book is full of uncritical historical reconstruction and poor use of primary and secondary sources. As such, I do not recommend this volume for either libraries or individuals.

In Great Generals of the Ancient World, Richard Gabriel explores the military history of nine ancient figures. Stated from the outset, he realizes that many may object to his list of great military generals, asserting that his lifetime of study is reason enough to take his list seriously (10). Though the book is oriented towards military history enthusiasts, this is largely irrelevant because the historical accuracy of the narratives throughout the book is questionable.

Through the chapters, Gabriel examines who he calls 'great generals': Thutmose III of Egypt, Moses, Sargon II the Great of Assyria, Philip II of Macedon, Scipio Africanus, Hannibal Barca, Julius Caesar, Marcus Agrippa, and Muhammad, also explaining why he did not select Alexander the Great. By and large, Gabriel's discussion is problematic in terms of his source material: how he uses primary sources and secondary material.

Gabriel's use of sources is uncritical and uninformed. This is most evident in Chapter Three, wherein he argues that Moses was one of the greatest military generals of all time. Rather than reading Exodus, Numbers, and Deuteronomy as texts preserving religious and cultural sentiments, Gabriel takes them at face value, accepting the claims within the texts as historically precise and accurate representations of real, historical events. A brief consideration of archaeological data and studies by scholars of the Hebrew Bible demonstrate clearly that the Hebrew Bible should not and cannot be primarily read as a historical text. Such problems are also evident in his discussion of Muhammad. Book reviews of his previous books about Greek and Roman history, ones to which he regularly refers to in this volume, indicate a regular and consistent problem with historical accuracy.

The secondary source material of Richard Gabriel is also questionable. Again, pointing to the chapter on Moses, Gabriel finds support for his claims in books which are outdated. Moreover, in some places, he provides no evidence for claims at all. In his discussion of Julius Caesar, he simply includes one reference: “Rather than clutter up the manuscript with scores of repeat footnotes, I thought it best simply to assert that the chapter is based primarily upon information contained in the original sources, and list them as a single footnote” (210n1). Though there is a place within academic writing to elide footnotes, that place is not within an argumentative book, for it prevents readers from confirming claims made by the author.

Far too often, he simply refers to his own previous books. However, looking through reviews of his previous publications, there is a consistent pattern: Richard Gabriel's history is crude, rampantly speculative, factually inaccurate, and positively misleading (Cook, 188). Though he claims to be a distinguished professor at a school in the Royal Military College of Canada, they informed me that he has not been affiliated with the college since 2010 CE. Likewise, he claims to be a distinguished professor in the Department of Defence Studies at the Canadian Forces College in Toronto; however, a current faculty member informed me that Gabriel was only a guest lecturer 10-15 years ago and received an honorary Doctorate in 2006 CE. He has never been member of the faculty, though. As such, his qualifications are questionable, both on the basis of his previous publications and his deceptive claim to be affiliated with military colleges.

This book is not worth purchasing, either by libraries or by individuals. A review of his book The Great Armies of Antiquity best captures my conclusions about this book: “readers are more likely to be seriously misled by Gabriel's book than enlightened. This is a monolingual work that exhibits no knowledge of international scholarship on the subject, and it will neither give the reader a good understanding of ancient sources nor provide an up-to-date bibliography of the secondary sources” (Sheldon 2004, 344-356).

$28.15
free shipping worldwide
$19.90
plus shipping
By purchasing books through this website, you support our non-profit organization. World History Encyclopedia receives a small commission for each book sold through our affiliate partners.

$28.15
free shipping worldwide
$19.90
plus shipping
By purchasing books through this website, you support our non-profit organization. World History Encyclopedia receives a small commission for each book sold through our affiliate partners.