Environmental Problems of the Greeks and Romans: Ecology in the Ancient Mediterranean (Ancient Society and History)

by Christie Blue
published on 11 September 2017 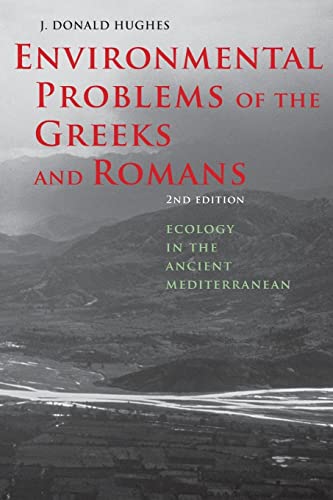 Hughes’ work touches on environmental sustainability, a question that is currently under debate in our own time. His research demonstrates the damage environmental abuse can have on developed societies and makes clear that these issues should be considered by the world today, using the past’s failures as a model for consideration.

Were the debates about global warming, air pollution, soil desalinization, and sustainable development born solely out of the environmental movements of the early 1970s or did these concerns have a much longer precedent? Ancient writers such as Strabo, Xenophon, Horace, Thucydides, Plato, Pliny the Elder, and others all recognized and warned their politicians about the degradation of the land and its harmful effects both in their present and future. Donald Hughes searched these ancient literary correspondences, treatises, public outcries, and private laments of the ancient Greeks and Romans to put together this outstanding work about natural resources and their role in civilization. Did the disregard and eventual loss of topsoil, fresh water, clean air, and sustainable agricultural practices lead to the downfall of these great empires? Hughes believes so and offers compelling evidence to support his theory.

Digging through both popular and little known classical libraries, Hughes' book is a rich volume of first-hand accounts and modern archaeological data (Runnels, C.) describing the use and misuse of the Mediterranean landscape between 600 BCE and 300 CE. His discussion throughout the 14 chapters illuminates an environmental concern and its place in the larger historical narrative. Each chapter is short and directly to the point, leaving out empirical charts and datasets that sometimes discourage readers. Environmental Problems touches on wildlife, ecosystems, climate change, industry, war, urban and sacred spaces, and nature's composition itself.

Hughes agrees that external threats from the north and pushback from the east and south played a part in weakening the Roman Empire. Both affected crops, as their bounty was overtaken or merely trampled and the land turned fallow. Infighting over power brought with it laws that sometimes could cripple the empire. For example, tax incentives were offered to those landholders who would abandon agriculture in favor of livestock. The result brought high tax revenues but the administration failed to think about the costs of feeding their public. Even the divisive factor of the budding Christian faith against the remaining pagan elite took its toll. Their disregard for the place nature held in the story of humanity left sacred groves with extensive biomes open to destruction. Deforestation, complete loss of animals and plant species and agricultural declines did contribute to overextended economies of Greece and Rome. The resulting imbalance to the ecosystem led the administration to search for markets overseas, creating inflated pricing, and resulting in shortages from increased demand.

Industrial and urban effluent, spoiling trash that could not be properly disposed of, foul water, and tainted soils prohibiting courtyard gardens contributed to increased disease and reduced military strength across the Empire; quite possibly a factor in the war losses of both Greeks and Romans alike. Environmental Problems of Greece and Rome offers compelling evidence to consider as contributing factors to weakened fringes that worked inward and the ultimate close to an end.

Hughes' work touches on environmental sustainability and the damage environmental abuse can have on developed societies. Environmental Problems of the Greeks and Romans: Ecology in the Ancient Mediterranean gives a new perspective about nature and the delicate place it held in ancient society and how its effects damaged a civilization beyond repair.

$33.67
free shipping worldwide
$33.00
plus shipping
By purchasing books through this website, you support our non-profit organization. World History Encyclopedia receives a small commission for each book sold through our affiliate partners.

The Extent of the Roman Empire

Time has seen the rise and fall of a number of great empires -...
Definition

Legacy of the Ancient Romans

The legacy of the ancient Romans – from both the time of the Roman...

$33.67
free shipping worldwide
$33.00
plus shipping
By purchasing books through this website, you support our non-profit organization. World History Encyclopedia receives a small commission for each book sold through our affiliate partners.