The Roman Barbarian Wars: The Era of Roman Conquest 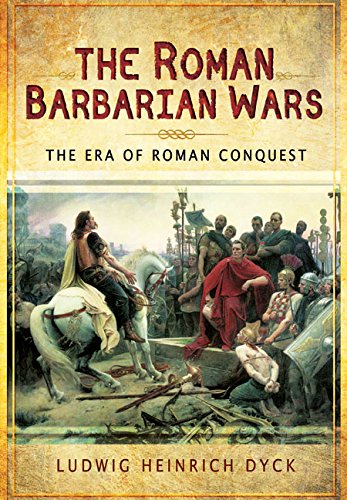 "The Roman Barbarian Wars: The Era of Roman Conquest" is a book about the Roman expansion through Europe where original quotes and the author's writing style join to create an exquisite narration which can be appreciated even by those who are not used to reading history books.

The Roman Barbarian Wars: The Era of Roman Conquest by Ludwig Heinrich Dyck is not a historical novel, but an exhaustive study on one of the most interesting topics of the Roman Era: the Roman conquests. And, in particular, the Barbarian wars. At the beginning, Dyck uses the first pages to introduce the term “barbarian” and explain who were those “Barbarians” that appear over and over in the texts written by the Classical historians. Then, once the key concept is clear, he starts to explain the different, and most important, Barbarian wars in which Rome was involved in chronological order, so the reader has an organized view about the evolution of the Roman conquests and expansion of the empire.

Before finishing this book, the reader could think that Roman Barbarian wars are only the battles fought with the Germanic tribes, however, Dyck includes in his book Barbarian and Celtic tribes. Therefore, we can travel from the north of Italy, all the way through France and its Gaul tribes, Spain and the Celtic tribes and, finally, the Germanic tribes from what nowadays is Germany. Nevertheless, this is not a regular history book or manual about the Roman Empire as what makes Dyck's publication curious is the way he has collected all the data and original quotes from Classical historians and mixed them up with the narration he himself has written. All the quotes and references are collected and classified at the end of the book by chapter and type of source, that is, by primary and secondary sources. Also, the author has included various images and pictures of specific battles and characters, which give readers a different vision of this era, mainly through artistic representations such as paintings and sculptures, introducing extra references to provide a wide knowledge of this particular moment of history.

The quotes give veracity to the text, plus they add great detail about the battles and main characters involved in those events. Of course, all the quotes come from Latin or Greek sources, conditioning our vision of the “Barbarian” tribes to the Roman and Greek beliefs and standards of the time. Still, the amount of details about the different tribes, their costumes and beliefs catches the attention of the reader and allows the public to develop a deep interest in tribes that are usually forgotten under the strength of the Roman Empire. This special attention to tribes and their political and strategic movements during the wars and their final conquest denotes a different approach to the state of Europe during the era of Imperial Rome and, in the end, that is the key element that makes The Roman Barbarian Wars an essential reading for people interested in the Roman Empire, but also, European tribes and people before the Roman expansion.

Finally, it seems interesting that even if, as it was said before, we are not dealing with a novel, this book catches the reader into the history, so too, the reader is always looking for more information. Inside The Roman Barbarian Wars the reader has almost 240 pages full of pure Roman history, details and quotes, all mixed together and written with a perfect style, so even those who are not used to reading history books and prefer novels will be delighted with this exquisite narration.

$22.07
plus shipping
By purchasing books through this website, you support our non-profit organization. World History Encyclopedia receives a small commission for each book sold through our affiliate partners.

Athanaric (died c. 381 CE) was a king of the Thervingi Goths (better...
Definition

The Goths were a Germanic tribe who are frequently referenced for...

$22.07
plus shipping
By purchasing books through this website, you support our non-profit organization. World History Encyclopedia receives a small commission for each book sold through our affiliate partners.