Please help us pay for the servers and web services required to operate our non-profit organization's website. Any donation helps, no matter how small: If every visitor were to give only $1 we would be fully funded within a day.

by Alex Criddle
published on 12 May 2016
Send to Google Classroom:
Rating: 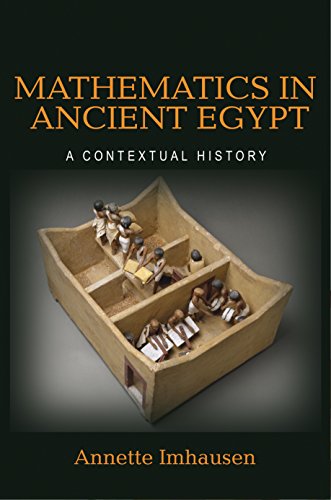 Mathematics in Ancient Egypt traces the development of Egyptian mathematics, from the end of the 4th millennium BC to the end of the Pharaonic Period in Greco-Roman times. Imhausen uses mathematical texts that have been discovered, documents used by administrators to govern the people, various architectural drawings and any other mathematical documents that have been discovered to show what was known. She shows that numeric ideas were used from the beginning of civilization in Egypt.

Imhausen splits the book into five parts discussing the Prehistoric and Early Dynastic Period, the Old Kingdom, Middle Kingdom, New Kingdom, and the Greco-Roman periods. At the beginning of each section she gives a brief history of what is going on at this time period and how it factors into the mathematics being used at that time, which is incredibly helpful. She then goes over the uses of mathematics in each time period discussing the various number systems that have been developed, where they were used, and how they were used. She pulls from an incredible number of sources to show where she gets her information and that show what it was used for in each period. She discusses the metrological systems developed in the Old Kingdom; the foundations of mathematics, multiplication of integers, fractions, tables for fractions, architectural calculations and land measurements in the Middle Kingdom; mathematics in literature, administrative texts, and in the daily work of scribes in the New Kingdom; and the various mathematical texts in the Greco-Roman Periods.

Imhausen's book is a superb introduction into the field of mathematics in ancient Egypt. She has an incredible mastery of the source material and writes it in an objective way. That incredible mastery of the source material makes it somewhat hard to follow in the book, though. She frequently will mention papyri found that contain some material using mathematics but does not always explain the background of the fragment or papyrus. She does it on some, but stating name of the papyrus and where it was found does not mean much without a background context of said papyrus. She does make good usage of tables and diagrams showing the papyri and the symbols used on the papyri that makes it much easier to understand what she is talking about. This really is a fantastic introduction, especially considering it covers around 3,000 years of material, but it is a hard subject that can be dry to many. Those without a special interest in mathematics may find it very dry and hard to understanding most likely. It is a fascinating introduction to Egyptian mathematics, though, and I would recommend it to anyone interested in the history of mathematics, egyptology, or Egyptian culture.

$45.00
plus shipping
$43.45
free shipping worldwide
By purchasing books through this website, you support our non-profit organization. World History Encyclopedia receives a small commission for each book sold through our affiliate partners.

The government of ancient Egypt was a theocratic monarchy as the...
Definition

Imhausen, A. (2016, May 12). Mathematics in Ancient Egypt: A Contextual History. World History Encyclopedia. Retrieved from https://www.worldhistory.org/review/136/mathematics-in-ancient-egypt-a-contextual-history/

$45.00
plus shipping
$43.45
free shipping worldwide
By purchasing books through this website, you support our non-profit organization. World History Encyclopedia receives a small commission for each book sold through our affiliate partners.
Remove Ads