Sanctuary of Fortuna Primigenia at Palestrina

Available in other languages: Italian

The Sanctuary of Fortuna Primigenia at Palestrina (ancient Praeneste) in Italy was built in the 2nd century BCE to honor the goddess Isis and the goddess Fortuna. The massive site spans a mountainside, built with Roman cement or pozzolana, and remains a rare example of an intact pagan temple complex. The design reflects Hellenistic and Egyptian influences and was the site of the Nile Mosaic of Palestrina, a 1st-century BCE portrayal of Nile river life. During the Roman Republic, wooden lots were cast for divining the future, and Cicero (106-43 BCE) recorded that Romans regarded no place more fortunate than the Sanctuary of Fortuna. Livy (59 BCE -17 CE) described Praeneste's importance and that Roman commanders wished to consult Fortuna before launching their campaigns in the First Punic War (264-241 BCE). In the early Christian era Saint Agapitus (Agapito in Italian) was martyred at Praeneste. Much of the original temple was uncovered in excavations after World War II (1939-1945 CE). Since 1954 CE the site has been open to the public, as the National Archeological Museum at Palestrina, including relics recovered from Iron and Bronze Age tombs.

Ancient Praeneste's massive temple structure, the Sanctuary of Fortuna Primigenia has a commanding prospect over the region. Praeneste is now called Palestrina and is about 23 miles southeast of Rome. The massive temple has seven layers of ramps and terraces up the side of Mount Ginestro, and at the top was a sanctuary for the goddess as well as a site for casting lots to determine the verdict of the oracle. The temple faces southwest towards the Mediterranean and oversees a broad valley which made any sacrifices or ceremonial fires visible from a great distance.

The Sanctuary's origins were as a temple dedicated to the goddess Fortuna Primigenia (the firstborn) and was also linked to the Egyptian cult of Isis. Over time the cult centered upon the goddess Fortuna, who was sculpted holding the child Jupiter; her cult was associated with motherhood, and her oracle was consulted by local people as well as the Romans.

Broad ramps allowed devotees to climb from one terrace to another & finally to the place where sacrifices were made & divination practiced.

The massive structure spans nearly a quarter-mile (c. 400 m) across, is nearly as high along the steep slopes of the mountain, and rises level by level. Broad ramps allowed devotees to climb from one terrace to another and finally to the place where sacrifices were made and divination practiced. Cicero records that a young boy was chosen to pull the lots from a well to reveal the divination. The oracle was trusted by the local people but also by Roman emperors and military elite who sought advice from the oracle of the goddess Fortuna.

Cicero described the origins of the oracle, when a Prenestine noble, Numerius Suffustius, was told in a dream to split a large rock, which revealed the wooden lots carved with ancient writing. The story included an olive tree dripping honey which was cut down to make a box or ark to store the lots. A young boy would choose one of the wooden lots, and the determination would be made. Rome issued a coin in 69 BCE showing the box marked “SORS” for the lots inside and an image of the goddess Fortuna on the other side.

Although in his On Divination, Cicero questioned the value of the oracle, Romans believed the casting of lots could predict the future, and reliance upon divination here was also described by Livy. During the First Punic War in 241 BCE, Roman commander Lutatius Cerco wanted a verdict from Fortuna at Praeneste to reveal whether he should act. Cicero reported that Carneades was sure that “at no other place had he seen more fortune than at Praeneste” (Book II, 41.87). Roman generals hoped for an auspicious message before their military campaigns from the oracle.

During the imperial period, Roman emperors also found the mountain air and beautiful setting beneficial for their health. Emperor Tiberius (r. 14-37 CE) built a residence in the town but grew to fear the oracle's power. Suetonius (c. 69 - c. 130/140 CE) reported that Tiberius feared “the Praenestine lots” so much that he ordered the box of lots brought to Rome, then relented and returned them to the Sanctuary.

The presence of wealthy Romans led to the expansion of the temple structure and its continuing decoration with sculptures, mosaics, and epigraphs in styles reflecting a powerful Hellenistic and Egyptian influence on the artistic and architectural designs of the Sanctuary and its relics. This did not guarantee peace, though, as the town was periodically caught up in civil wars since control over mountainous Praeneste meant dominance over the route south of Rome. In 82 BCE, the town was sacked by the forces of Sulla (138-78 BCE), and all its male residents were put to death. Later, Rome granted Praeneste the status of a municipium, which gave townspeople Roman citizenship. The temple remained a pagan site until the rise of Christianity in Praeneste and the martyrdom of Saint Agapitus in the town in 274 CE.

The Sanctuary's most beautiful relic, the Nile Mosaic, was originally laid on the floor at the ground level of the temple's grotto, and portrays life along the Nile at flood stage with its banks filled with people including Egyptian hunters and Macedonian soldiers. The polychrome mosaic is nearly 6 x 4 meters in size and features a variety of wildlife including rhinos, crocodiles, a gerenuk, fish, and birds, each identified by name in Greek letters. In its original placement it was flooded over with flowing water and a parallel mosaic, the Fish Mosaic, of which only a fragment remains. Comparisons have been drawn between the Sanctuary of Fortuna and the Egyptian Temple of Hatshepsut as well as the setting of the Pergamon Altar.

One of the earliest buildings to use Roman cement was the Sanctuary of Fortuna Primigenia.

Romans developed a mixture of limestone and volcanic ash called pozzolana, which is both light and strong. One of the earliest buildings to use this Roman cement was the Sanctuary of Fortuna Primigenia, and the strength of the mixture is testified by its resilience on the site two millennia later. Another feature of the site is its massive foundations and base walls constructed of gigantic, precisely fitted polygonal stones. In addition, the sanctuary and the town were ringed by nearly three miles (c. 4,5 km) of stone walls known as “cyclopean walls” because their size led to the assumption only the Cyclopes (one-eyed giants) could have set them in place.

Gradually the original name of Praeneste was transformed to Palestrina, and by the late 1500s CE, the residents of the town had begun to encroach upon the Sanctuary of Fortuna by building on the ramps and terraces a neighborhood known as Il Borgo (the village). Houses filled the central plazas and ramps and many residents gathered broken fragments of sculpture and epigraphs to decorate their properties. So much of the area was covered that the original structure was no longer visible.

Architectural historians attempted to understand the structure, including Andrea Palladio (1508-1580 CE), who visited the site in an attempt to reconstruct how the Sanctuary might have once appeared. An imaginary reconstruction by Giovanni Stern was made in the late 1700s CE, and Jean Huyot drew another in 1811 CE, but no one had actually seen the Sanctuary of Fortuna and its ramps since the medieval era.

The town and the surrounding lands were controlled by the Colonna family, who were succeeded by the Barberini, in 1675 CE. The Barberini princes encouraged archeological excavations in the 1800s CE, which revealed Iron Age and Bronze Age artifacts from tombs nearby. They preserved these relics in their private museum, including the Nile Mosaic, which was removed from the lowest level of the temple for restoration.

In 1944 CE, World War II threatened Palestrina and the Sanctuary. In June, after the Anzio landings, Allied bombing moved northward towards Rome. The Barberini family, desperate to protect the Nile Mosaic, ordered it to be sawn into pieces and trucked to a safer location. A few days later much of the town was destroyed along with the Barberini museum. In an ironic twist, the bombing destroyed most of the houses of Il Borgo, which raised the question of whether to rebuild after the war or to excavate the site and uncover the Sanctuary of Fortuna.

In 1947 CE a team of architects and archeologists, led by Furio Fasolo and Giorgio Gullini, began a decade of excavations that removed tons of rubble, stabilized the mountainside, and began to reveal the original foundations and structure. The Sanctuary of Fortuna and its surviving relics were purchased by the Italian government, and in 1954 CE, a new national museum was opened which encompassed the entire site.

The Sanctuary of Fortuna, as well as the recovered sculptures and relics including the Nile Mosaic, were opened to the public as Museo Archeologico di Palestrina e Santuario della Fortuna Primigenia (the National Archeological Museum at Palestrina). Preservation and interpretation of the site continues, and visitors can walk the terraces of the original structure and visit a museum, as well as enjoy the vistas which extend to the Mediterranean.

We want people all over the world to learn about history. Help us and translate this article into another language! So far, we have translated it to: Italian

Isis is an ancient Egyptian goddess who became the most popular...
Article

The gods and goddesses of Ancient Egypt were an integral part of...
Article

The Lamentations of Isis and Nephthys

The Lamentations of Isis and Nephthys is an ancient Egyptian text...
Definition 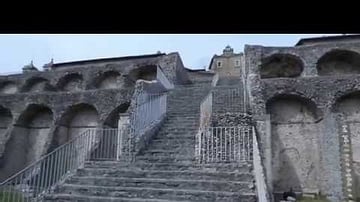 The sanctuary of Fortuna Primigenia, is a magnificent sacred complex...
Image

Ruins of the sanctuary of Fortuna Primigenia at Palestrina.

Submitted by Teresa Fava Thomas, published on 20 November 2020. The copyright holder has published this content under the following license: Creative Commons Attribution-NonCommercial-ShareAlike. This license lets others remix, tweak, and build upon this content non-commercially, as long as they credit the author and license their new creations under the identical terms. When republishing on the web a hyperlink back to the original content source URL must be included. Please note that content linked from this page may have different licensing terms.