by Mark Cartwright
published on 13 February 2017

Orion was the great hunter of Greek mythology who was famed for his good looks and many love affairs. Either his assault of or admiration from Artemis resulted in the gods transforming the giant into a constellation. Referred to by such ancient writers as Hesiod and Homer, the constellation of Orion was used as an important navigation and agricultural aid throughout antiquity.

The myths involving Orion are varied and contradictory. In some versions, he is the son of Poseidon and Euryale, one of the three Gorgon sisters. Other writers have him as the son of Hyrieus, the son of Alcyone (one of the Pleiades) and Poseidon. In this version, Hyrieus, a poor old farmer and beekeeper, provides hospitality to Zeus and Hermes and in return is granted the favour of a son. Orion was thus born when Hyrieus followed the gods' instructions and buried the hide of a sacrificed bull in his wife's grave. For the trick to work, the farmer first had to add water to the hide and, lo and behold, Orion sprang from the earth nine months later. This miraculous birth involving water explains the association with the coming of rains on the rise and fall of the Orion constellation.

Traditionally, then, Orion came from Hyria in Boeotia, and what is not disputed is that he was of fine physique, good looks, and possessed great prowess as a hunter. Orion was one of the great Greek lovers, too, said to have fathered 50 sons from sleeping with 50 nymphs.

For his audacity, Orion was transformed into the constellation that bears his name & his dog was, likewise, changed into the bright star Sirius.

Not satisfied with his conquest of the nymphs, Orion then landed on Chios and chased after and assaulted Merope, one of the Pleiades, daughter of Oenopion and so grandaughter of Dionysos. Oenopion had promised his daughter to the great hunter if he could clear the island of its troublesome wild beasts. This Orion did, but Oenopion, loathe to lose his daughter, would not make good on his promise and pretended there were still plenty of wild animals roaming about Chios. Orion then took his prize anyway and assaulted Merope in her chambers. When Oenopion discovered the crime, he asked Dionysos for help, and the god of wine first made the hunter drunk and then had him blinded by satyrs. The unfortunate Merope would later become the wife of Sisyphus, and it is her shame at having been the only one of her sisters who married a mortal that explains why her star shines less brightly in the Pleiades constellation.

Fortunately for Orion, his sight would be restored if he could only get himself to the point where Helios – the Sun – first rises above the Ocean each day, far away to the east. So, taking a rowing boat he made his way across the sea, picking up Hephaistos' assistant Cedalion as a guide along the way when he stopped on Lemnos. Reaching his destination, Helios duly restored Orion's sight, and Eos, the personification of Dawn and Helios' sister, promptly fell in love with the handsome hunter. Their illicit affair is said to account for the beautiful morning blush of dawn.

Orion's next pursuit proved a rather more ambitious and fateful one for he attacked the goddess Artemis, herself a great huntress. For his audacity, Orion was transformed into the constellation that bears his name and his dog was, likewise, changed into the bright star Sirius. However, an alternative version (and Homer's) of the story has Eos fall in love with the powerful hunter while he was visiting Helios, and Artemis kills him with her arrows in jealousy somewhere near Ortygia (Syracuse?).

In yet another version, Artemis killed Orion by accident after being tricked by Apollo into thinking the hunter was, in fact, a villain who had attacked one of her priestesses. Orion, whilst swimming to escape a giant scorpion (again sent by Apollo) is killed by Artemis' arrows after the goddess could only see his distant bobbing head and failed to recognise the hunter. This tragedy was after the two great hunters had been sporting around Crete together. Artemis tried to enlist the medically-gifted Asclepius to bring Orion back to life, but he was just then struck down by Zeus' thunderbolt for being rather too handy at bringing the dead back to life and blurring the distinction between mortals and gods. In this version, it was Artemis' regret at the loss of her hunting companion which allowed him to become a constellation and gain immortality amongst the stars.

Another tradition sprang up that Orion was not at all in the stars but, rather less romantically, entombed at Tanagra, north of Athens. The 2nd-century CE Greek travel writer Pausanias claimed to have even visited the site which was also considered the place of the pole where Atlas sat and meditated.

In Homer's Iliad (Bk. 18:487) Orion appears on the great shield of Achilles (as the constellation) made by Hephaistos. He appears again in Homer's Odyssey (Bk. 5:121 & 274, Bk. 11:310 & 572) where, far from the stars, he is down in the depths of Hades, collecting all the animals he had hunted during his lifetime. Seen by Odysseus, Orion is still not satisfied and now chases his prey all over again, armed with a club of indestructible bronze. The hunter's constellation is also mentioned by Calypso as a guide for Odysseus on his voyage home. Hesiod mentions the position of Orion in the night sky in several passages of his Works & Days to guide farmers when to perform certain agricultural tasks. Other constellations are also useful guides, notably the Pleiades and their pursuit by Orion in myth reflects the fact that, as the constellation, they rise and appear just before Orion does.

Artemis was the Greek goddess of hunting, wild nature, and chastity...
Definition

Temple of Artemis at Ephesus

The Temple of Artemis at Ephesus was located on the western coast...
Article 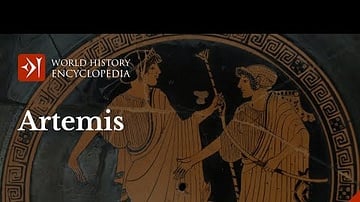 Greek Goddess Artemis: Goddess of the Hunt and the Moon in Greek Mythology

The Greek goddess Artemis was the goddess of the hunt, wild nature...
Definition

Written by Mark Cartwright, published on 13 February 2017 under the following license: Creative Commons Attribution-NonCommercial-ShareAlike. This license lets others remix, tweak, and build upon this content non-commercially, as long as they credit the author and license their new creations under the identical terms. When republishing on the web a hyperlink back to the original content source URL must be included. Please note that content linked from this page may have different licensing terms.