Nyx (also known as Nox or the Night) is the personification of the night in Greek mythology. Coming from Chaos (Void), Nyx is a primordial deity (Protogenoi). The Protogenoi represent the physical and elemental forces of the world and consist of the first order of divine beings that all gods, heroes, and monsters from Greek mythology arise from.

Although she is considered a relatively minor figure in Greek mythology, as the personification of the Night, Nyx holds great power. Nyx's power is perhaps most evident in Homer's Iliad, where we see the mighty Zeus baulk at the idea of crossing Nyx.

Nyx drives a chariot, all cloaked in black, with a starry or black veil and stars following in her wake. She resides in Tartarus: the deepest part of the underworld, with her daughter Hemera (Day). The two never meet; however, Hemera leaves Tartarus just as Nyx enters it and returns when Nyx leaves. The best-known depictions of Nyx in Greek mythology are found in the Theogony by Hesiod (c. 700 BCE) and in the Iliad by Homer (c. 750 BCE).

The Creation of the Gods

Hesiod mentions Nyx multiple times in his creation story (Theogony), where he talks about the origins of the Greek gods and goddesses:

From Chaos came black Night and Erebus.
And Night in turn gave birth to Day and Space
Whom she conceived in love to Erebus. (1.124-126)

Nyx went on to have many children of her own: some who were kind-natured and others who were terrible. As mentioned by Hesiod in the Theogony (1.209-42), Nyx's offspring includes:

Nyx serves as an advisor to Uranus' son Cronus and then Cronus' son, Zeus, after he becomes ruler of the Olympian gods.

Nyx is featured quite prominently in the Orphic creation stories (a religious sect that followed the teachings of the mythical poet Orpheus, who preached about the nature and destiny of the world). In one such story, Aether (Radiance), Chaos (Abyss), and Erebus (Darkness) came from Chronus (Time Without End). Chronus then forms an egg inside Aether, from which comes Phanes (To Bring Light) – the creator of all that exists, a radiant being with golden wings and the heads of different animals. Phanes gives birth to Nyx, and Phanes and Nyx then go on to conceive Uranus (Heaven). Nyx serves as an advisor to Uranus' son Cronus and then Cronus' son, Zeus, after he becomes ruler of the Olympian gods. In another version of the Orphic creation story, Nyx lays an egg from which hatches Phanes and other deities.

Some scholars believe that Nyx could have been a supreme deity in early Orphic belief. We see evidence for this in the ancient Orphic Hymns that refer to Nyx as a parent goddess and states that gods and mortals came from her. It is also interesting to note that Nyx was the one to advise Zeus after he became king of the Olympian gods.

Orpheus' name is associated with darkness which is why Nyx, the personification of the Night herself, plays a crucial role in the Orphic creation stories.

In the Greek comedy Birds by Aristophanes (c. 460 to c. 380 BCE), Erebus and Nyx are the first divinities who hatch an egg from which Eros, the god of love, emerges and creates the earth. Aristophanes' egg creation myth was inspired by the Orphic cosmogony tradition, modelled after Hesiod's better-known creation story, with one main difference: the addition of the Greek deities hatching from eggs.

Aristophanes tells us how Chaos, Night, Erebus and Tartarus (the Underworld) were the only ones in existence until black-winged Nyx laid an egg in the infinite depths of Erebus. From that egg sprang golden-winged Eros, the god of love. Eros then went on to create the rest of the world. In Orphic creation stories, the egg represents the world, which is why it plays such a pivotal role in the creation of the gods and goddesses.

In the Iliad by Homer, Nyx rescues her son Hypnos after he faces the wrath of Zeus. Hera, Zeus' wife and queen of the Olympian gods resented the Greek hero Hercules because he was Zeus' son from a mortal woman, Alcmene. She brainstorms a plan to destroy his ships on his way home from Troy and asks Hypnos to put Zeus in a deep sleep, so he is none the wiser. Hera then whips up a storm that wrecks Hercules' ships. Zeus awakens and is furious with Hypnos, intent on throwing him off Mount Olympus. Hypnos goes running to Nyx for protection, knowing that Zeus would not dare cross the Night herself; such was her power.

And out of the skies, he would have sunk me in the sea,
wiped me from sight, if the Night had failed to save me,
old Night that can overpower all gods and mortal men.
I reached her in flight and Father called it quits
despite his towering anger. True, Zeus shrank
from doing a thing to outrage rushing Night. (Iliad, 14.311-316)

There are few visual depictions of Nyx in Greek paintings or sculptures; however, her appearance is mentioned in multiple sources: she rides in a chariot drawn by two horses, clothed in black with a black or starry veil on her head and stars following in her wake. In addition, some sources mention her holding a floating black veil covered in stars in her right hand, with a torch facing downwards in her left hand. She is beautiful and youthful in her appearance, but her demeanour is grave.

In other sources, she is described as a floating figure clad in a long black robe who carries her sons Thanatos (Death) and Hypnos (Sleep) in her arms. Thanatos is covered in black and carries an inverted torch, while Hypnos is draped in white and carries a poppy.

Although Nyx is mentioned in Orphic liturgy, there is very little evidence of any worship taking place in temples. However, black animals were said to be sacrificed to her, especially black cocks, as they announced the coming of morning, even in the presence of Night.

Although Nyx & Hemera both dwell in Tartarus, they are never home at the same time, symbolising the separate day & night cycle on earth.

In his book Description of Greece, the Greek travel writer and geographer Pausanias (110/125 to 180 CE) mentions an Oracle of the Night in Megara (a Greek city West of Athens) as well as a statue of Nyx made by the famed sculptor Rhoecus and housed at the Temple of Artemis in Ephesus (modern-day Turkey).

Pausanias also mentions seeing a carving of Nyx at the Temple of Hera in Olympia, Greece. Pausanias states that the carving was etched onto the top of a cedar chest which belonged to the Corinth tyrant Cypselus. The carving shows a woman holding a sleeping child draped in white in her right arm and a black covered child in her left arm. An inscription states that the two children are Death (Thanatos) and Sleep (Hypnos) and that their nurse, Nyx, carries them both.

Tartarus can be found in the deepest part of the underworld and is home to Nyx and her daughter Hemera (Day). In Theogony 1.726-741, Hesiod writes that a wall of bronze surrounds Tartarus and describes it as the "yawning mouth of hell," which is loathed by the gods. Although Nyx and Hemera both dwell in Tartarus, they are never home at the same time, symbolising the separate day and night cycle on earth.

Untiring, in the place where Night and Day
Approach and greet each other, as they cross
The great bronze threshold. When the one goes in
The other leaves; never are both at home,
But always one, outside, crosses the earth,
The other waits at home until her hour

For journeying arrives. The one brings light
All-seeing, to the earth, but deadly Night,
The other, hidden in dark clouds, brings sleep,
Brother of Death, and carries him in her arms. (1. 726-57)

Nyx may not be as famous as the twelve Olympian gods and goddesses. However, she still plays an integral part in Greek mythology, as the personification of the Night and as one of the oldest Greek deities. She was loved by the people of ancient Greece because she was the bringer of rest and an escape from the stresses of everyday life. However, on the other hand, she also brought death and darkness, resulting in trepidation and fear.

The tradition of calling moons after mythological figures continues with the International Astronomical Union (IAU) naming one of Pluto's moons Nix after Nyx. In addition, the famous cosmetics brand, NYX Professional Makeup, has also been named after Nyx.

Liana Miate
Liana is the Social Media Editor for Ancient History Encyclopedia. She holds a Bachelor of Arts Degree with a major in ancient Greece, Rome & Late Antiquity. She is particularly passionate about Rome and Greece, and anything to do with mythology or women.

In Greek mythology, Tartarus was the lowest point of the universe...
Article 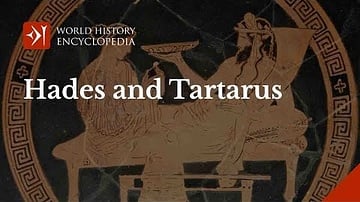 The Theogony is an 8th-century BCE didactic and instructional poem...
Definition

The Fates (also known as the Moirai in Greek mythology) are three...
Definition

Submitted by Liana Miate , published on 30 March 2022. The copyright holder has published this content under the following license: Creative Commons Attribution-NonCommercial-ShareAlike. This license lets others remix, tweak, and build upon this content non-commercially, as long as they credit the author and license their new creations under the identical terms. When republishing on the web a hyperlink back to the original content source URL must be included. Please note that content linked from this page may have different licensing terms.