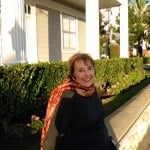 I became an ancient historian quite by accident. After being married and having five children, I went to the University of California. I needed a third course: In the catalogue my eye fell on a seminar about the Julio-Claudians, and I thought, "I'd like to know more about them." Taking that course constituted my Damascus Moment: I changed my major to History; my decision to do so changed my life!

I've lived in Amsterdam (where I studied music at the Amsterdam Conservatory) for four years, and Rome (where I went on a Fulbright Scholarship and stayed on to do research and write my doctoral dissertation) for almost nine years. Being in Rome, surrounded by layer on layer of history, was a heady experience indeed.

One of my great joys was organising and leading onsite ancient history/archaeology study tours in Italy for the month of January while I was an Assistant Professor at Macalester College, St Paul, Minnesota. I took my students on Rome Walks, to museums and archaeological sites in Rome and its environs as well as the Bay of Naples area and Paestum. I am happy to say that I am still friends with ten of the students with whom I was able to share my Roman Experience.

While in Rome, attending a National Endowment for the Humanities fellowship on Death and Commemoration, I became interested in the Columbaria of Imperial Rome, and I was honoured to win the NEH/Archaeological Institute of America/Helen M Woodruff Post-Doctoral Rome Prize at the American Academy in Rome, where I continued my studies on these fascinating ancient funeral institutions.

I have written several articles on the Roman historians, Livy and Tacitus, and one on first-century terracotta oil lamps in the shape of sandalled feet, sacred to the Roman-Egyptian god Serapis. I have also written two books: "The Rhetoric of Gender Terms: 'Man,' 'Woman,' and the Portrayal of Character in Latin Prose" (Leiden 1992); and "Tragedy and Rhetoric in Tacitus' Annales" (Ann Arbor 2006).

I am delighted to discover that Classics and Ancient History are thriving on Twitter, where, as well as finding other classicists, ancient historians, and students interested in the ancient world, I also discovered the "Ancient History Encyclopaedia". I am both honoured and pleased to be a contributor.

[image:3146] A columbarium is an underground chamber, which...
Image

The Columbarium at the Villa Wolkonsky, Rome

Before entering this columbarium, which is in the garden of the...
Image

After cremation, the incinerated bones were picked out and sorted...
Image

From the 15th-18th centuries CE, the many columbaria that lined...
Image

Although the title under this etching reads "camera sepolcrale...
Image