Ancient Near East: The Basics

by William Brown
published on 09 October 2015 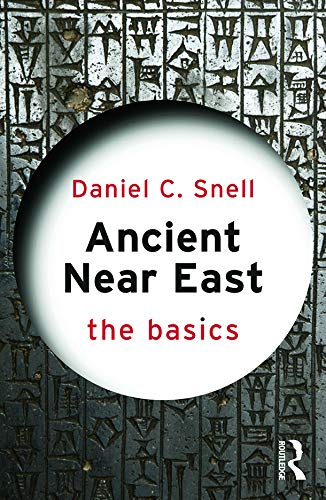 Routledge's series “The Basics” opens the doors to all people, especially non-academics and students, to explore the basics of certain topics. Daniel C. Snell, the L. J. Semrod Presidential Professor of History at the University of Oklahoma, has an interest in not only technical books but also accessible books. Hence, he was well qualified to write the basics of the ancient Near East. The accessibility of the book is, after all, one of its most outstanding achievements.

Snell begins by discussing what the 'ancient Near East' actually means. His brief summary of essential terminology, linguistic and writing developments, modern and ancient political issues, and geographical layout provide a solid foundation for the remainder of his introduction. Following, Chapters Two through Four explore the ancient Near East, divided by the Early, Second, and First Millenniums. Discussion of the Early Millennium focuses on introducing basic concepts important to the ancient Near East, such as royal ideologies, the role of states, basic lifestyle, and much more. Chapter Three, while still demonstrating technological developments, focuses on the conflicts and interactions between ancient city-states. Chapter Four then shifts to the major developments with regard to religious reformation, deportations, and ruralization, which resulted in the disappearance of the ancient Near East until its recovery in the 19th century CE.

Chapters Five through Seven focus on the remaining materials, namely literature, art, and legacy. The literature, Snell notes, was not necessarily written at a particular time; rather, literature was more likely than not a tradition of stories passed down that elucidate the ideas and cognitive environment of the ancient Near East. Art, in a similar vein, accomplishes the same thing, providing modern scholars with the opportunities to understand ancient ideas. Finally, Snell specifically notes various things and ideas which left a legacy for humanity, such as the wheel, education, and science.

Chapter Eight expertly and succinctly reviews the history of the re-discovery of the ancient Near East. From early 18th century scholarship to 20th century CE scholarship, Snell traces how ancient Near Eastern studies emerged and eventually found a place of conceptual autonomy apart from the Hebrew Bible. Ancient Near Eastern history, Snell argues, has implications for the present in that it permits people with distinct religious backgrounds to work together and, thereby, soften borders and attitudes towards each other in ways that “tend to underline our shared human heritage” (135). He wraps up the basics by noting hope for the future of ancient Near Eastern studies emphasizing the importance of philology for finding the common humanity that has been preserved for us to this very day.

As a whole, Snell's work is exquisite. In order to allow every reader to fully engage in and learn what is being presented, he speaks in a very personal matter, referencing “we” and “us” quite often. In doing so, one is brought into the narrative unfolding of ancient history and developments therein. Furthermore, in a few chapters, he includes fables to demonstrate the human quality of the discoveries and ideas in the ancient Near East. These help to demonstrate issues of the rule of kings and spread of humans across the Mesopotamian plains in a relatable and entertaining fashion.

Another major achievement of his basic introduction is the clear relevancy for ancient Near Eastern studies to the modern world. Rather than writing a basic introduction focused on the ideas, all the discussion of history, literature, and art is written as and explained to be pertinent to continuing multi-religious dialogue and repairing rifts created by conflicts through history.

In conclusion, Snell's addition to Routledge's “The Basics” is an indispensable contribution that provides a solid framework for ancient Near Eastern studies and biblical studies. The writing style of the book allows one to fully immerse in and absorb his words. Such a book is an excellent addition to any introductory class on the Hebrew Bible, as it engages with ancient Near East history and provides the essential context to understand it.

$32.41
free shipping worldwide
$13.80
plus shipping
By purchasing books through this website, you support our non-profit organization. World History Encyclopedia receives a small commission for each book sold through our affiliate partners.

The Near East is a modern-age term for the region formerly known...
Definition

$32.41
free shipping worldwide
$13.80
plus shipping
By purchasing books through this website, you support our non-profit organization. World History Encyclopedia receives a small commission for each book sold through our affiliate partners.