Venus and Aphrodite: A Biography of Desire 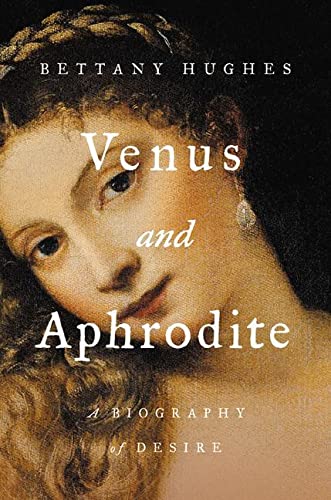 Venus & Aphrodite: History of a Goddess is a non-fiction book written by Bettany Hughes that explores the history of the goddess Aphrodite or Venus. Using archaeological evidence, as well as textual sources, Bettany Hughes beings in the Ancient Near East and traces the movements, developments and reception of the goddess through to the modern day. This is a short book written in an accessible way, supported by solid archaeological evidence.

Venus & Aphrodite: History of a Goddess by Bettany Hughes is a light, easy read which follows the history of the goddess best known as Venus or Aphrodite, from her beginnings to the modern reception of the goddess. Using archaeological evidence with textual sources and more recent artworks and literature, Bettany Hughes traces the origins of the goddess of love, and both her movements and developments through history.

As some will know, Aphrodite is the ancient Greek goddess of love, desire, beauty, and sexuality, and Venus is the Roman counterpart to Aphrodite, and she held dominion over fertility, prostitution, and victory. However, as Hughes delves into in the first few chapters of her book, Aphrodite did not just suddenly appear in Greek literature and artworks but evolved from both the Cypriot spirit of procreation and fertility, as well as the Near Eastern goddesses of war Inanna, Astarte, and Ishtar. Beginning from both the mythological beginnings of Aphrodite (with the castration of Ouranos, and the goddess emerging from the sea foam caused by the god’s genitals falling into the ocean), as well as the archaeological beginnings, and moving all the way through the Renaissance depictions and the morphing of her dominions and depictions through to the modern day, Hughes has provided an accessible and easy to read guide to the goddess and her history.

A potent idea, given a name and a face across five millennia, this deity is the incarnation of fear as well as love, of pain as well as pleasure, of the agony and ecstasy of desire.

From the very first page, I knew this was going to be a far easier read than I was initially anticipating. Hughes has written this book as if she was just chatting to a mate, and honestly, I loved that. Although it initially caught me off guard, it made it so much more appealing and tempted me to pick it up more often knowing that the language used was easygoing. The colloquial language, however, does not take away from the importance of this goddess and her significance throughout history, especially in ancient civilisations. What Hughes has done is a thorough investigation on the goddess, and then she turned that hard evidence into a book that is easily understood and accessible to anyone. Hughes has achieved the goal of bringing archaeological and historical facts into the world in an easy-to-read and enjoyable book, and I love it! Her addition of images throughout the book, both in black and white dispersed through the book, and in the middle which is full of coloured images, makes it all the more interesting, especially in the discussions around the changes in the physical depictions of the goddess.

Aphrodite/Venus has been simplified into the goddess of sex & desire, & this book is out here to remind the world that she is so much more.

I love that it was a short, easy read. It means that there is a far better chance that more people will pick it up (and I love the idea that the ancient world is becoming something more open and available). But with some points Hughes made, I felt like I wanted more evidence that backed up her conclusion. I am sure that she has done her research, and I do not doubt any of the statements or conclusions she has come to in this fascinating history, but I would have loved just a bit more depth into some of the evidence (whether it be archaeological or textual) that she has used to form her conclusions. In saying that, I always want more out of my books, and I commend her for making this book so full of information and yet so easy to read.

I definitely feel like the goddess Aphrodite/Venus has been simplified into the goddess of sex and desire with little substance, and this book is out here to remind the world that she is so much more. Hughes explores the goddess' roots in the war goddesses of the Near East (Inanna, Ishtar, and Astarte), and brings to the forefront the seemingly contradictory beginnings of this goddess through love, desire, and war. This book details just how much the attitudes towards the goddess have developed throughout the millennia, and what her body and her symbols have meant throughout the years. The complexities of Aphrodite/Venus have been written and painted out of history in the last thousand years, and this book is bringing back the intricacy of this goddess, which will hopefully culminate in the respect and adoration she deserves.

This review was originally published on Kell-Read.

$24.76
free shipping worldwide
$14.52
plus shipping
By purchasing books through this website, you support our non-profit organization. World History Encyclopedia receives a small commission for each book sold through our affiliate partners.

$24.76
free shipping worldwide
$14.52
plus shipping
By purchasing books through this website, you support our non-profit organization. World History Encyclopedia receives a small commission for each book sold through our affiliate partners.
Remove Ads