by Kelly Macquire
published on 26 April 2021 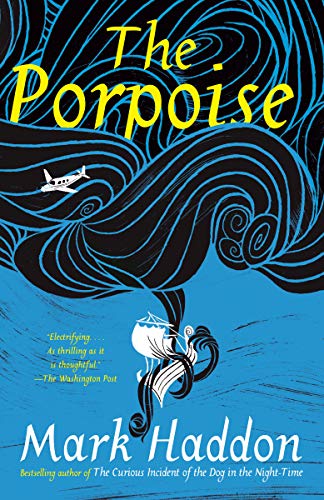 The Porpoise by Mark Haddon is a historical fiction novel which intertwines a modern story with an ancient tale. The novel moves from the modern day into the ancient story seamlessly, it moves through multiple points of view and is split into five parts. The Porpoise explores an ancient story lost from time as well as topics which are taboo in the modern world, but which are often delved into in the stories from the ancient world.

The Porpoise is a novel that seamlessly intertwines a modern tale with an ancient story. After Philipe’s wife is killed in a plane crash and their daughter Angelica survives, the wealthy father raises his daughter in near isolation. Although she wants for nothing, the father-daughter duo is not as it appears from outside eyes. When Darius stumbles into a far darker and troubled home than he was anticipating, he flees the house and the girl in desperate need of help. It is at this point that the ancient story of Pericles, Prince of Tyre, a story which dates back to ancient Greece, is woven into the novel as easily as taking a breath. From this moment you are transported from present-day to ancient history, from consciousness to unconsciousness in a truly unforgettable way.

She recounts these tales to herself in idle moments, inevitably changing them a little every time and comes to believe, in some occult way, that these are stories of her own invention, that she is bringing these lives into being, as if she is one of the Fates, those supernatural women who make and cut the thread of life.

This book is an absolute whirlwind, most of the time I was disconcerted with whose point of view it was, and when in history we were, but I was also actively enjoying it. Haddon’s prose is stunning. It ebbs and flows in a way that makes you feel steady amidst a novel so busy. His language is whimsical in a sense that the perfect words have been chosen to convey the dreamlike, and almost intangible sense that nothing is as it seems. To say that this book doesn't give you a break is an understatement. From page one, you know that this is going to be unlike anything you’ve ever read before.

She can see it clearly now. Everyone inhabits a different world.

The Porpoise effortlessly blends the modern with ancient. It is split into five sections and has no chapters, but often changes in time are marked by a paragraph marker. I think this was such a brilliant way to keep the novel flowing as one continuous story. To have chapters splitting up time and space would have made it feel clunky and wrong, but this way, you simply glide from one time to the next, letting the story take you with it. The novel is a retelling of a Greek myth that no longer survives and incorporates the play written by Willian Shakespeare and George Wilkins; Pericles, Prince of Tyre. I’m not sure whether being familiar with the myth and the play will work to your advantage when reading this book, but I loved going into it completely without bias. Haddon had full rein over this myth, since there is no ancient source to work with, and what he has done with it is truly incomparable. The writing is mesmerising and the characters are all so unique and utterly human. They’re flawed, often they’re morally grey, and together, they convey the spectrum of the human condition. Lovers of William Shakespeare and ancient tales alike will find this novel an enjoyable read which will keep you on your toes until the very last word.

$18.07
free shipping worldwide
$15.47
plus shipping
By purchasing books through this website, you support our non-profit organization. World History Encyclopedia receives a small commission for each book sold through our affiliate partners.

Tyre (in modern-day Lebanon) is one of the oldest cities in the...
Article

After defeating Darius III at the battle of Issus in November 333...
Definition

Phoenicia was an ancient civilization composed of independent city-states...

$18.07
free shipping worldwide
$15.47
plus shipping
By purchasing books through this website, you support our non-profit organization. World History Encyclopedia receives a small commission for each book sold through our affiliate partners.