Thermopylae: The Battle For The West

by Matthew Vivonia
published on 05 November 2020 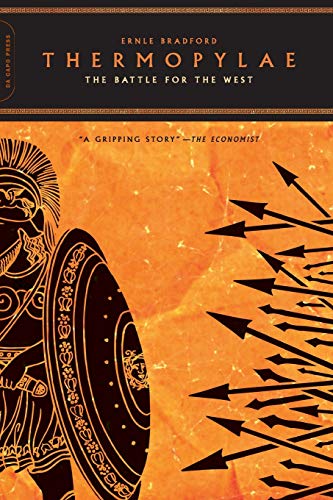 Thermopylae: The Battle for the West is an exciting, non-fiction book on the Greco-Persian Wars that carries the feel of fiction. Ernle Bradford brings ancient battles to life through his extensive military experience. This book is highly recommended for general audiences interested in the true version of the Battle of Thermopylae and Leonidas' 300 Spartans. It is concise, entertaining, and filled with context for not only the combat but also Ancient Greek culture as a whole.

Ernle Bradford's Thermopylae: The Battle for the West is an exciting book for general enthusiasts of ancient history. This speedy read does not strictly focus on the Battle of Thermopylae (480 BCE), where Leonidas and the 300 Spartans held off Xerxes I, but rather provides the context for this battle by overviewing the Greco-Persian Wars. Bradford begins by describing how Xerxes' predecessors laid the foundations for his Greek campaign. The story evolves past the Battle of Thermopylae to the decisive battles of Salamis and Plataea. To discuss the full extent of the Persian invasions, Bradford elaborates on the shifts of power to the West in Sicily. Bradford achieves his extensive coverage by omitting details that often intimidate the general enthusiast. The result is a highly entertaining read.

Ernle Bradford was a 20th-century CE British historian and WWII veteran with a passion for naval warfare. He has written many books surrounding maritime battles, focusing on the Mediterranean across thousands of years. Bradford imbues all of his pieces with his own experiences and skill for storytelling. While Thermopylae is military history, Bradford's style embellishes the genre with plentiful context for those less familiar with Ancient Greece. Readers not only learn about the battle strategies employed by the Greeks and Persians but also become immersed in the culture of the time as well. Bradford understands that one cannot learn Leonidas and the 300 without a grasp on who the Spartans were as people, how they differed from the Athenians, and even more from the Persians of the Achaemenid Empire. This is where Bradford excels. Unlike many other comprehensive works on the Greco-Persian Wars, Bradford's book is told chronologically and with narrative flair so that the reader sometimes forgets they have not picked up a novel.

Although Bradford's ability to make connections between ancient & modern warfare is intrinsic to his military genre, it hinders his interpretation of character.

Bradford also enriches his work with his seasoned experience fighting in the Mediterranean Sea as a lieutenant during WWII. He has a firsthand understanding of Grecian geography, seasonal sailing conditions, and the importance of timing and placement in an attack. Readers may acquire the sense that the author understands the grave significance of these details from his own personal wisdom. As the 2004 CE edition includes six maps, readers are able to trace the Persian campaign across Greece and conceptualize the layout of individual battles. Bradford's work underscores the fact that spatial understanding was one of the most vital determinants of military success in the ancient world.

Although Bradford's ability to make connections between ancient and modern warfare is intrinsic to his military genre, it hinders his interpretation of character. Bradford is far from the biased, ancient historians like Herodotus that drive modern knowledge of Ancient Persia. He is skeptical of not only Herodotus' military numbers but also of Herodotus' personal interpretations of the “tyrannical” Persians. Bradford dismisses Herodotus' xenophobia about Persia but falls into another trap of encapsulating the Greek personality. He incorporates modern perceptions into his dialogue that often ring of anachronism. Readers should therefore accept his interpretations of the Greek spirit with skepticism.

Overall, Thermopylae: The Battle for the West is an excellent introduction for anyone intrigued by the Greco-Persian Wars. While a passion for military or ancient history may serve as a healthy prerequisite, the text's clarity and conciseness will not confuse a casual reader. Bradford's work is a colorful narrative depiction of Xerxes' invasion that blends the drama of fiction with the careful analysis of non-fiction, leaving a long-lasting impression on the reader.

$22.39
free shipping worldwide
$14.99
plus shipping
By purchasing books through this website, you support our non-profit organization. World History Encyclopedia receives a small commission for each book sold through our affiliate partners.

Matthew Vivonia
Matthew is a recent college graduate with a B.A. in History and a Teaching Credential, currently working in childcare. He enjoys art, dance, literature, and costuming from antiquity and hopes to study ancient history in graduate school.

Leonidas I of Sparta

Leonidas was the Spartan king who famously led a small band of...
Definition

Thermopylae is a mountain pass near the sea in northern Greece...

$22.39
free shipping worldwide
$14.99
plus shipping
By purchasing books through this website, you support our non-profit organization. World History Encyclopedia receives a small commission for each book sold through our affiliate partners.