The Pharaoh’s Treasure: The Origin of Paper and the Rise of Western Civilization

Running a website with millions of readers every month is expensive. Not only do we pay for our servers, but also for related services such as our content delivery network, Google Workspace, email, and much more. We would much rather spend this money on producing more free history content for the world. Thank you for your help!
$46 / $21000
❤ Donate

by William Brown
published on 18 January 2019 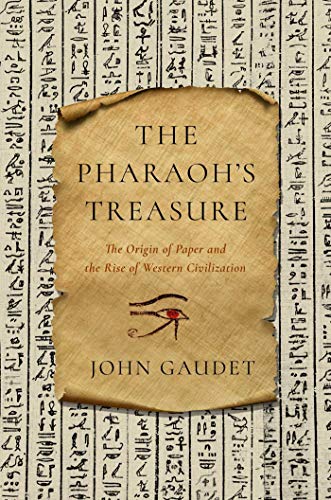 This book attempts to describe how papyrus was central to the development of Western Civilization by looking at the role papyrus played throughout history. It is oriented towards a general audience. On account of the poor quality of writing, misrepresentation of scholarship and history, and disjunctive character of the book, though, I do not recommend this book.

Having completed his Ph.D. in Botany at the University of California at Berkeley, John Gaudet primarily worked as an ecologist throughout his career. His early work focused on studying papyrus in Africa, working as an Africa Region Environmental Advisor in the US Agency for International Development, and, most recently, working as a writer and ecology consultant. So, in The Pharaoh's Treasure, Gaudet attempts to leverage his technical knowledge of botany and ecology for the purpose of writing a history of papyrus. In what follows, I will summarize the book and offer critical reflections on its content.

The book is divided into three sections. The first section is titled “Guardian of Immortality.” It attempts to highlight how ancient Egyptian paper and books were discovered, along with their cultural significance. The second section is titled “Egypt, Papermaker to the World.” It attempts to highlight the earliest forms of paper, its manufacturing, and how it came to be a central medium for communication in the ancient world. The final section is called “Enemy of Oblivion” and explores a variety of disparate topics.

Throughout the book, many interesting aspects concerning the nature of papyrus, what people thought of papyrus, and how papyrus faded as a central means of communication are revealed to the reader. Nonetheless, I have three primary criticisms concerning the book: the disjunctive character of the narrative; the general poor quality of writing; and the misrepresentation of history, scholarship, and sources.

First, the narrative of the book is, at best, characterized as disjunctive. In Chapter 18, Gaudet discusses Roman libraries. He starts off by addressing a library built in 217 CE. This is followed by a discussion of libraries built in the 1st century BCE, 1st century CE, 2nd century CE, and ends in the 4th century CE, noting that “there were twenty-nine public libraries in Rome” (195). After having moved forward chronologically, Gaudet abruptly moves back to discussing libraries from the 2nd and 3rd centuries BCE. This is disjunctive inasmuch as there is not clear chronological or logical trajectory. Instead, Gaudet seems to write all over the place, inattentive to any particular logical trajectory. This is also true with how each chapter links to the previous and proceeding chapter. And, unfortunately, this is only one example of the many disjunctive stories and narratives awkwardly woven together into an uneven, distorted tapestry. Such unevenness makes it difficult to follow the majority of what Gaudet is trying to communicate to the reader(s).

Second, the writing is generally poor in quality. This concerns both the narrative aspects and the structural aspects. Concerning the narrative, a prime example is in his discussion of how a particular manuscript was transported to Rome. He writes, “As he stepped forward, we can only imagine his feelings, as with the greatest of trepidations, he snapped open the sealed latches on the container to reveal the contents” (275-276; italics added for emphasis). In trying to construct the narrative, Gaudet's comment “we can only imagine his feelings” awkwardly instructs the reader to understand the story in a particular manner. A better, more engaging narrative would exclude the sentence all-together. In other words, he regularly tells his readers what they should experience, instead of allowing them to experience it for themselves.

Finally, the book is replete with poor history, scholarship, and sources. For example, he comments that the various Semitic alphabets became the Latin alphabet (63). Though true, his source material for this is Wikipedia! He also cites Wikipedia as an authoritative source in Chapter 9 endnote 13, Chapter 15 endnote 9, and Chapter 24 endnote 9. Frankly, Wikipedia is never a proper source for a research book. Although it may reflect common agreements among academics and within scholarship, proper representation should be sought after in books and articles written by scholars who specialize in the field.

Moreover, the author lacks an understanding of history. In the following list are a few places demonstrating that his analysis regularly misrepresents history (for a more detailed description of the following list of criticism, click here):

Though no book is perfect, I may still recommend them. In the case of The Pharaoh's Treasure, I do not recommend anybody read this volume. The only helpful and interesting chapter simply described the papyrus plant, where it is from, and how it is produced. In other words, the only chapter worth reading is the chapter which discusses Gaudet's expertise. History, though, is by no means Gaudet's expertise.

In fact, a review of his first book entitled Papyrus expresses the same problem: “the plant's history is not especially well-conveyed in the book's scattershot opening chapters, which confusingly mix a history of papyrus use and mythology in ancient Egypt with tales of 19th- and 20th-century European explorers in Africa, plus such present-day swamp-dwellers as Louisiana's Cajuns” (Kirkus Reviews). It seems, then, that all Gaudet has accomplished in his newer book, The Pharaoh's Treasure, is expand the scattershot, confusing mix of history with modern tales of explorers into a full-length book with a scattershot of confusing history and modern European tales.

$32.24
free shipping worldwide
$19.72
plus shipping
By purchasing books through this website, you support our non-profit organization. World History Encyclopedia receives a small commission for each book sold through our affiliate partners.

Papyrus is a plant (cyperus papyrus) which once grew in abundance...
Definition

The widespread use of paper and printing were features of ancient...

Brown, W. (2019, January 18). The Pharaoh’s Treasure: The Origin of Paper and the Rise of Western Civilization. World History Encyclopedia. Retrieved from https://www.worldhistory.org/review/201/the-pharaohs-treasure-the-origin-of-paper-and-the/

$32.24
free shipping worldwide
$19.72
plus shipping
By purchasing books through this website, you support our non-profit organization. World History Encyclopedia receives a small commission for each book sold through our affiliate partners.
Remove Ads