The First Signs: Unlocking the Mysteries of the World's Oldest Symbols

Running a website with millions of readers every month is expensive. Not only do we pay for our servers, but also for related services such as our content delivery network, Google Workspace, email, and much more. We would much rather spend this money on producing more free history content for the world. Thank you for your help!
$649 / $21000
❤ Donate 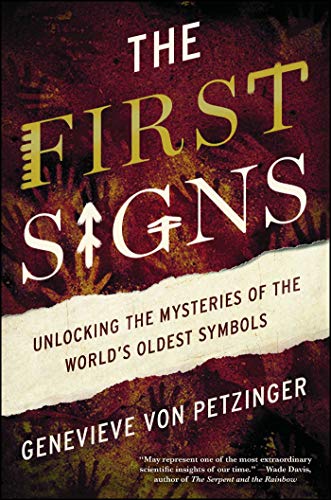 Despite what the title suggests, this book is about more than just the non-animal symbols found in Paleolithic cave paintings. Von Petizinger explores the development of the human intellect, explaining how we evolved to develop the complex symbology and artistry we needed to create the now-famous paintings. She argues that these abilities developed much earlier than many currently believe. It is a fascinating book for those interested in prehistoric cave art and the development of writing.

Genevieve von Petzinger is a Canadian author and paleoanthropologist who is currently the only researcher in the world focusing on the abstract signs that can be found at almost 400 sites across Europe. This research and the 32 signs that appear most frequently in Ice Age cave art are the focus of her book First Signs. Not only is von Petzinger studying something that has rarely received focused attention but she can also do what few non-fiction writers are able to do: she can weave a compelling narrative that delivers her facts clearly and engagingly. Her skillful storytelling makes First Signs a history book that reads like a novel in many places.

Exploring evidence from Africa, the Middle East, and Europe, von Petzinger also crafts an intriguing argument: modern human intellect and creativity emerged far sooner than most currently believe. While many anthropologists and archaeologists argue that fully modern humans and their art emerged in a "creative explosion" once homo sapiens migrated to Europe, von Petzinger disagrees. Throughout her book, she makes the case for a slower, more gradual evolution of human intellect, symbolism, and artistry with roots in Africa.

The inspiration for her theory is the symbols found alongside the animal figures in European Paleolithic cave art. A large part of the book focuses on her efforts to thoroughly document and categorize the dots, lines, and other symbols found in the caves. While she is hopeful that they may one day be deciphered, she does not believe they are a fully realized writing system - those hoping for such a claim will be disappointed in this book. She does, however, seem to believe that they are the product of an abstract way of thinking that may have led to formal writing systems several millennia later.

The writing in the hardcover edition of the book is supported with maps, black and white photographs, drawings of the signs, colour photographs, and detailed endnotes.

It is a fascinating book that goes beyond what its title suggests, exploring not just the symbols in the caves, but the emergence of the modern mind. For lovers of cave art, this book offers a new angle on the subject that most should find intriguing.

$16.01
free shipping worldwide
$15.99
plus shipping
By purchasing books through this website, you support our non-profit organization. World History Encyclopedia receives a small commission for each book sold through our affiliate partners.

Jessica Liew
Jessica Liew is a high school Social Studies teacher with over a decade of teaching experience. Her favourite course to teach is Comparative Cultures 12, which focuses on the study of prehistoric and ancient societies.

The Chauvet Cave (also known as the Chauvet-Pont-d'Arc Cave) is...
Definition

Rock art (also known as parietal art) is an umbrella term which...

$16.01
free shipping worldwide
$15.99
plus shipping
By purchasing books through this website, you support our non-profit organization. World History Encyclopedia receives a small commission for each book sold through our affiliate partners.