Uncovering the Culture of Ancient Greece 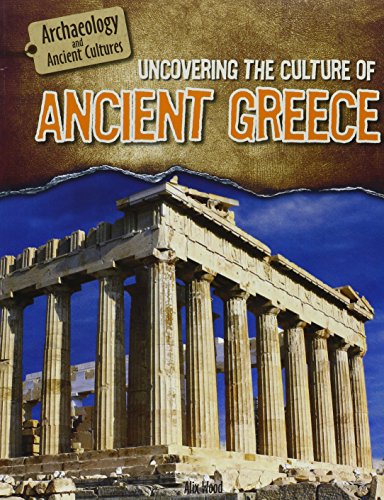 Uncovering the Culture of Ancient Greece by Alix Wood is a part of the Archaeology and Ancient Cultures series. It is designed for younger children aiming to pique their interest in and educate them about ancient cultures. The book is laid out with a 2-page spread that details a city, people, or topic in ancient Greek history including Knosses, Mycenae, the Valley of the Temples, the Acropolis, etc. It provides a short description of the topic with pictures of artifacts, ruins, art, and people

Uncovering the Culture of Ancient Greece by Alix Wood is a part of the Archaeology and Ancient Cultures series. It is designed for younger, elementary school-aged children aiming to pique their interest in and educate them about ancient cultures, history, and archaeology.

The book is laid out in 2-page spreads that detail a city, people, or topic in ancient Greek history. Among the people it introduces the reader to are: the villages of Sesklo and Dimini, the Minoans via the city at Knossos, Mycenae, and the Lefkandi. It discusses various monuments in ancient Greek history including: the Home of the Olympics, the Valley of the Temples, the Oracle at Delphi, and the Royal Tombs. On each page is a small map labeling where the information takes place within Greece. Each section describes how it was found and the people that found it. Because it is aimed at children, there are pictures of the places and monuments that are described. The color and vibrancy of the illustrations are effective tools in recreating the setting and people of ancient Greece. Within the descriptions are words in bold that are included in an extremely helpful glossary at the back of the book.

The book is colorful, brief, and exciting to read and look at! It is designed to keep the interest of a young child and teach them interesting facts about Greece in a short amount of time. The diverse information allows for differing interests to be sparked. It contains sections on code-breaking and volcanoes—two things that are sure to grasp a child's imagination. The book offers insight into each age of Greek history. It begins with the prehistoric Greek people and Minoans and takes the reader through to Greece during the Hellenistic age. However, a link is not provided between the various ages. The author provides a pinpointed snapshot of that age's history and culture without much transition. A very brief history surrounding the local people is included, but that is the extent of the context given.

The history and information given are done so in the setting of an archaeologist. In that sense, the book achieves its goal. It provides a glimpse into the archaeological finds of ancient Greece. However, it does not provide the best “uncovering” of the culture of ancient Greece. It gives snapshots of the culture that surrounds the particular artifact it presents but does not explore the culture or connect the various changes in culture any further. In addition, the book interacts with objects and places rather than texts and stories. There is little mention to writing, for example, aside from a page discussing the tablets containing the scripts of Linear A and Linear B.

This book would be an effective resource for a child who is more interested in pictures and objects than in reading longer explanations of a people and culture. It would serve as a decent supplementary material if read with a book that gave a good foundation of the Greek culture and people. Alone, it would not be the best resource for one interested in ancient Greece.

$14.81
free shipping worldwide
$6.44
plus shipping
By purchasing books through this website, you support our non-profit organization. World History Encyclopedia receives a small commission for each book sold through our affiliate partners.

The Mycenaean civilization flourished in the late Bronze Age from...
Definition

The Minoan civilization flourished in the Middle Bronze Age (c...

$14.81
free shipping worldwide
$6.44
plus shipping
By purchasing books through this website, you support our non-profit organization. World History Encyclopedia receives a small commission for each book sold through our affiliate partners.