What Are They Saying About Ancient Israelite Religion?

by Jonathan Homrighausen
published on 29 August 2017 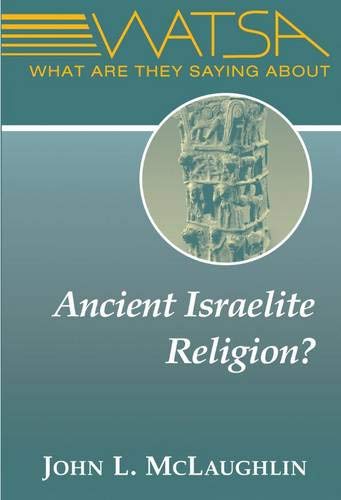 A concise summary of the past few decades of scholarship on the emergence of monotheism in ancient Israel. Aimed at university-level readers.

For keen readers of the Bible, it's no secret that ancient Israelites worshipped many gods other than Yahweh. After all, biblical writers tell us so in their lamenting, denouncing way. Judges tells us that the people worshipped Baals and Asherahs (3:7), while Jeremiah condemns his compatriots for baking cakes for the Queen of Heaven (7:18, 44:17–19). Clearly these Israelites had no problem adding gods to the mix other than Yahweh. But what if they were the mainstream of their time, with monotheism only a later revisionist view on the past?

McLaughlin's academic book explores this possibility through a review of the gods and goddesses of ancient Israel, and how they were eventually discarded and/or subsumed into the monotheistic worship of Yahweh. McLaughlin's brief book is in the “What Are They Saying About …” series from Paulist Press, designed to serve as literature reviews of issues in current theology and Scripture study. However, rather than a survey of all of ancient Israelite religion, McLaughlin reviews a narrow question within that field. The title, then, is a bit of a misnomer, though the book jacket better clarifies the focus.

In various chapters, McLaughlin covers the emergence of Yahweh, various male and female deities of ancient Israel (e.g. Baal, Asherah, Molek, and the Queen of Heaven), the divine council (cf. Job 1–2), and the emergence of monotheism itself. His book argues no specific thesis, but serves as a review of various authors on the topic, such as John Day and Mark Smith. He supplies an annotated bibliography in the back.

This book would serve as a good starting-point on the development of monotheism in ancient Israel. One helpful pointer McLaughlin adds: after summing up a particular theory, he mentions how well-accepted that theory is by others in the field. Sometimes it is these pointers that best serve those approaching a new question and buried in bibliography. This helpful book is best suited for an academic audience.

$17.95
plus shipping
By purchasing books through this website, you support our non-profit organization. World History Encyclopedia receives a small commission for each book sold through our affiliate partners.

Yahweh is the name of the state god of the ancient Kingdom of Israel...
Article

As early as the 10th century BCE, Israelite and Judean religion...
Definition

$17.95
plus shipping
By purchasing books through this website, you support our non-profit organization. World History Encyclopedia receives a small commission for each book sold through our affiliate partners.