by Ben Morales-Correa
published on 04 July 2014

The great discoverer of the treasures of King Tutankhamun, Howard Carter, was born on May 9, 1874 CE to Samuel John and Martha Joyce (Sands) Carter in Kensington, England. A sick, home-schooled child, Carter learned to draw and paint from his father, an accomplished Victorian artist. These skills helped Howard Carter in his career as an archaeologist, working at a time when color photography was nonexistent.

His passion for Egyptology was awakened in his youth after witnessing a large collection of Egyptian antiquities housed in the mansion of Lord Amherst, who acquainted him to Percy Edward Newberry, a member of the London-based Egypt Exploration Fund. Newberry was at that time seeking an artist to copy the art within the Egyptian tombs on behalf of the Fund.

Howard Carter first visited Egypt in October 1891 CE, arriving in Alexandria at the age of 17. He began working at the Middle Kingdom tombs in Beni Hasan. Three months later, the young artist was learning the disciplines of field archaeology and excavation from the great Flinders Petrie. Under Petrie, Howard Carter went from artist to become an Egyptologist.

Nevertheless, Howard Carter's career took off at a meteoric pace, becoming main draughtsman and overseer at the site of the Mortuary Temple of Hatshepsut at Deir-el-Bahari in Luxor and appointed at the age of 25 as Inspector General of Monuments for Upper Egypt by the Director of the Egyptian Antiquities Service, Gaston Maspero.

This is about the time when things took a turn for the worse for Egyptologist Howard Carter. His “stubborn” personality and individual views of his own career and methodologies put him at odds with fellow archaeologists and officials. In 1905 CE, after a bitter dispute with some wealthy French tourists, who complained to higher authorities, Carter was ordered to apologize and refused. His refusal caused him to be assigned to less important tasks, which prompted his resignation. The promising Egyptologist had to resort to his artistic talents to support himself, rather meagerly.

Maspero did not forget Howard Carter, however, and introduced him to George Edward Stanhope Molyneux Herbert, the 5th Earl of Carnarvon, about 1908 CE. Lord Carnarvon was prescribed annual wintertime visits to Egypt by his doctor to aid in a pulmonary ailment.

It was the extraordinary relationship of these two men, the unwavering determination of the Egyptologist and the trust bestowed by his sponsor, that produced the most famous archaeological discovery of all time.

Howard Carter undertook the supervision of Carnarvon's sponsored excavations and by 1914 CE had secured some antiquities for his patron's personal collection. But his real dream was to find the tomb of an ancient young pharaoh of the 18th dynasty, a glorious period of Egyptian history.

Before the name of Tutankhamun, or King Tut, became a household word, this pharaoh was first known through a small faience cup inscribed with the king's name found by American Egyptologist Theodore Davis in 1905 CE. Davis thought he had found the looted tomb of Tutankhamun after he discovered an empty single chamber (KV58) containing just a small cache of gold foils with the names of Tutankhamun and his successor Ay.

Both Carter and Carnarvon suspected that Davies was wrong in assuming that KV58 was in fact the tomb they were after, since Tutankhamun's mummy was not found either among the cache of royal mummies discovered back in 1881 CE at Deir el Bahari or at KV35 (Amenhotep II) in 1898 CE. The missing body of Tutankhamun could only mean that his tomb was was not disturbed when the ancient priests assembled the royal mummies for protection. Furthermore, it was also possible that the tomb's location was forgotten and, therefore, not robbed in antiquity.

Season after season went by until, no longer capable of sustaining another search, Lord Carnarvon gave up hope and returned to Britain. Carter, however, would not give up and persuaded his patron for a last chance.

Only three days after the excavation season began in November 1, 1922 CE, Howard Carter stepped on a platform he found after clearing ancient debris from the construction of tombs. This was the first step of a sunken staircase which, after slow and careful excavation, led the team to witness the intact royal seals of King Tutankhamun for the first time. The telegram Carter send to his patron read: “At last have made wonderful discovery in Valley; a magnificent tomb with seals intact; re-covered same for your arrival; congratulation.”

Howard Carter had to endure 15 excruciatingly anxious days waiting for the arrival of Lord Carnarvon to be there with him for this momentous event in their lives. Clearing work was resumed and in the afternoon of November 26, Howard Carter made a small hole in the sealed doorway, inserted a candle and peered into the dark tomb. The wait was well worth it, for what lay behind the seals of the royal tomb were “wonderful things” indeed.

Howard Carter's 1922 CE discovery of the tomb of Tutankhamun was...
Interview

Tutankhamun and the Tomb that Changed the World with Dr. Bob Brier

Join World History Encyclopedia as they sit down with Dr. Bob Brier...
Definition

The Discovery of Tutankhamun's Tomb

Before Howard Carter discovered Tutankhamun's tomb, he began his... 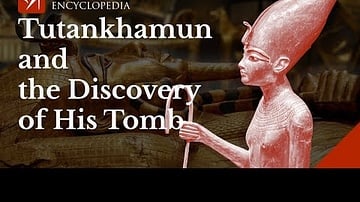 King Tutankhamun and the Discovery of His Tomb

King Tutankhamun (or King Tut as he is known) spent the early years...
Image

This content is provided by Past Preservers under a content sharing agreement. Original article by Ben Morales-Correa. Submitted by Past Preservers , published on 04 July 2014. The copyright holder has published this content under the following license: Creative Commons Attribution-NonCommercial-ShareAlike. This license lets others remix, tweak, and build upon this content non-commercially, as long as they credit the author and license their new creations under the identical terms. When republishing on the web a hyperlink back to the original content source URL must be included. Please note that content linked from this page may have different licensing terms.