In Search of the Promised Land: Saint Brendan’s Voyage

by Andrea Maraschi
published on 06 February 2019

Between the 9th and the 10th century CE, in an unknown European abbey, an anonymous author told the story of an Irish monk and his 14 companions who embarked on a dangerous journey in the 5th century CE. The monk's name was Brendan, and his destination was the Terra repromissionis sanctorum, the Promised Land of the saints. The text, known as Navigatio Sancti Brendani abbatis, is the account of an incredible adventure through fantastic landscapes, but – as many narrative texts set in the “fantastic” – it combines legendary elements with useful details about the author's culture, beliefs, and even mental attitude. This was typical of medieval hagiographic texts, which were meant to narrate the deeds of saints and their miracles, but that nonetheless mirrored the mentalities, anxieties, and longings of the world in which they had been written.

Brendan's story does not belong to the genre of hagiography, but to a specific Irish branch of stories about saints: the immrama, “voyages tales”. The rise of this indigenous literary genre was connected with the peculiar form that Irish monasticism took in comparison with other European models. Irish monks were more ascetic, austere, and so were their Regulae. Most importantly, they were characterized by a marked inclination to travel to remote lands in order to found new monasteries. Saint Columban (543–615 CE), for instance, left Bangor and travelled through the whole forests of Gaul for years, and eventually reached Bobbio in northern Italy. St. Brendan was no different: his destination was, though. 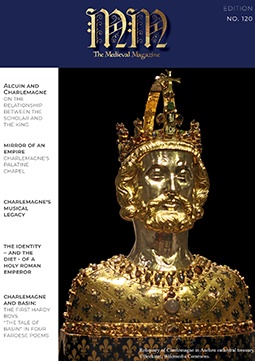 Where the Middle Ages Begin
This article was first published in The Medieval Magazine and republished with permission. Enjoy expertly curated content about the Middle Ages in this digital publication, delivered to your email inbox every month. Our editorial team highly recommends this magazine!
Get the Magazine

The idea to sail in search of the Promised Land of the saints came from Barinth, the abbot of Drumcullen, a distant relative of Brendan's. Barinth told him about a wonderful isle, a place where there was no hunger, no thirst, and no darkness. Should we be surprised that God had in store for his most pious men a place of plenty, where typical human fears – a lack of food, and death – were banished?

Of course not. Christianity – just like many other religions – based its force on an appealing agreement: it required an initial investment in faith, and offered a final (but eternal) stay at a heavenly afterlife. Interestingly, and not unlike the Old Norse Valhalla, the Christian afterlife looked like a wonderful banqueting hall as well (Mt 22:1-14): warm and with inexhaustible meat-based courses, in contrast with the dark world outside, “where there'll be weeping and gnashing of teeth”.

After the fast, the monks built a wooden boat, covered it with bovine leather, & finally set sail with provisions for 40 days.

Barinth's words were enough to convince Brendan and his companions to put to sea in search of the heavenly Terra repromissionis. The thing is...they left on an empty stomach. Before leaving, indeed, they decided to fast for 40 days, in accordance with the archetypal biblical model. The reason was twofold, and on two levels: the author wanted to connect his story with the Bible; the characters needed to purify their bodies and their souls in following the deeds of biblical prophets.

After the fast, the monks built a wooden boat, covered it with bovine leather, and finally set sail with provisions for 40 days: clearly, they planned to reach the Promised land within...“biblical times”. Actually, their estimate proved pretty accurate, and it was no matter of luck: God, from His invisible outpost, was guiding them.

The moment the monks ran out of food, they immediately caught sight of an island and headed for it. It took them three days to eventually dock when, at the ninth hour, they saw a small bay suitable for anchoring: needless to say, these numbers were no coincidence, and were all connected with biblical symbolic ones (3, multiples of 3, etc.). The company was welcomed by a cheerful dog, and Brendan immediately recognized the pet as a messenger of God. It led them to a large dwelling where table, chairs, and water had been elegantly set inside a wide atrium, almost as if the abode itself had been waiting for the Irish monks to arrive. Suddenly, the table was set by itself, and the monks had a white loaf and a fish each to eat: a generous and miraculous lunch which was in total harmony with the typical monastic diet (in which meat was often replaced with fish for penance-related reasons).

The following morning, they found the table miraculously set once again: and for three days, God fed them at that heavenly place of plenty. On the fourth day, the monks were ready to leave the island, when a juvenis (a young boy) came to them carrying a basket filled with bread and some water. This spontaneous gift from a stranger, which fed them until Easter, was no coincidence either, and would not be an isolated occurrence.

They sailed again through the ocean, and after a while they saw land and went ashore: it was Holy Thursday. On Holy Saturday, a man turned up bringing bread and other provisions. He also added that he would bring them more provisions in eight days, since he already knew where they would dock. All of these unknown benefactors were clearly sent by God, and were yet one another typical trait of early medieval hagiographic tales.

Behind the literary appeal of these tales, then, was the underlying message that Christianity was the answer to everyday issues & fears.

They finally weighed anchor and, after staying one day on the back of a giant fish named Jasconius (which they mistook for an island), the monks stopped by an isle where birds were singing psalms and praising the Lord. There, Brendan and his companions celebrated Easter, and then the messenger of God showed up again and gave them food and drink. He told Brendan that those provisions would be more than enough to sustain them until Whitsunday.

The man was of his word. On Pentecost day, he returned and carried all the food that was necessary for the celebration; then, eight days later, before they set out, he gave them as many provisions as their boat could carry. The monks were getting closer to their final destination, but still had to go a long way. Now, they were alone with the seas.

About three months later, Brendan reached the island of St. Albeus. Here, an old man welcomed them and led them into a nearby monastery. Brendan and his companions were given white loaves and exquisite roots: foods which mirrored those of Irish hermits and monks, but which were tastier, delicious, heavenly. Bread in monasteries could be white (made with wheat), but was often black (made with inferior grains): monastic food was meant to mortify the body, not to please it. Similarly, roots were usually consumed by hermits in the forests, and were not considered a delicacy.

The abbot of the monastery told the strangers that everyday he found such miraculous loaves in the pantry, and that God gave them all the food they needed. He also told them that the inhabitants of that island did not get old, nor did they feel cold or heat: the anxieties of the human world did not belong to the island of St. Albeus.

Brendan's journey to the Promised Land continued to be watched over by God, who would assist the Irish monks in many ways. For instance, by sending them a big bird that flew over their boat carrying in its beak a branch of an unknown tree from which was hanging a bunch of exceptionally red and ripe grapes. The bird dropped the branch on Brendan's lap, and the heavenly food filled the brothers for 12 days (another symbolic number). This and other parallel miracles in the Navigatio Sancti Brendani were clearly meant to recall biblical miracle tales, such as that of the manna from heaven, or of the quails that God sent to Moses. Christianity would perpetuate the memory of these wonders throughout all the Middle Ages thanks to the Vitae of saints, and with good reason: such stories would edify the faithful by showing them that the only apparent problem with Christian monotheism – the distance separating man from God – was way more irrelevant than it might have seemed. As unknowable and unreachable as he was, God had sacrificed himself on the cross, and had sent prophets and saints to perform miracles and look after the common people, the poor, the sick, and so on. Behind the literary appeal of these tales, then, was the underlying (but extremely powerful) message that Christianity was the answer to everyday issues as well as to the deepest fears and anxieties of mortal life.

Almost at the end of his fantastic adventure, Brendan made landfall at the island of Paul the hermit. This hermit told the Irish monk that an otter had been bringing a fish and firewood to him for 30 years, once every three days. He never felt hungry thanks to the Lord, nor thirsty, since every Sunday a spring of water would pour from a rock...not unlike a well-known miracle which is featured in the Book of Exodus.

Yes, Brendan and his monks found the Terra repromissionis sanctorum, at last. But, as has been noted, the author of the Navigatio wanted to make a parallel between such a perilous journey through unknown seas and isles, and the journey of life in the world. He wanted readers and listeners to understand that if they had faith, they would never be left alone. It was as easy as that, however hard it could sound. Symbolically speaking, the Navigatio allegorizes this message in the repeated episodes of the spontaneous offerings of food, whether by unknown characters, animals, or mysterious forces: a rhetorical strategy which reminds us – if ever it was needed – that food is language.

Ireland is an island country located in the North Atlantic, bounded...
Definition

Christianity is the world's largest religion, with 2.8 billion...
Definition

On the Ocean: The Famous Voyage of Pytheas

The Spice Trade & the Age of Exploration

One of the major motivating factors in the European Age of Exploration...

Original article by Andrea Maraschi. Submitted by The Medieval Magazine, published on 06 February 2019. The copyright holder has published this content under the following license: Creative Commons Attribution-NonCommercial-ShareAlike. This license lets others remix, tweak, and build upon this content non-commercially, as long as they credit the author and license their new creations under the identical terms. When republishing on the web a hyperlink back to the original content source URL must be included. Please note that content linked from this page may have different licensing terms.