by Mark Cartwright
published on 23 August 2015

Available in other languages: French, Turkish

Thanjavur (Tanjavur or Tanjore) is a temple site in the Tamil Nadu region of southern India. Thanjavur was the capital of the great Chola (Cola) king Rajaraja I, and it was he who commissioned the site's magnificent temple, the Brihadishvara, in the early 11th century CE. Many other temples and shrines were added over the centuries making Thanjavur one of the most important and most visited historical sites in India today. Thanjavur is listed by UNESCO as a World Heritage Site.

Also known as the Rajarajeshvara, after the king who built it, the Brihadishvara (or Brhadisvara) temple was constructed between c. 995 and 1025 CE using Chola war booty and tribute from Sri Lanka. The temple was dedicated to the Hindu god Shiva. Reaching a height of 63 metres, it is the tallest temple building in India. The entire rectangular complex measures approximately 140 x 75 metres and is surrounded by a wall with regular interior niches. Inside the compound are various secondary shrines and a monumental double gateway entrance (gopuras).

Reaching a height of 63 metres the Brihadishvara is the tallest temple in India.

The two-storey Brihadishvara temple is built on a high dadoed-base platform. The granite tower (vimana), which rises in thirteen diminishing levels above the sacred garbhagriha (inner shrine), is topped by a dome structure which rests on a single 7.7 m square granite block weighing around 80 tons. The building has a front entrance porch (mandapa) with 36 columns, and there are two additional entrances at the base of the tower on each side. All three entrances are decorated with guardian figure sculptures, some double life-size, and are approached by a richly carved monumental flight of stairs. The hundreds of niches of the exterior are decorated with sculpture of divine figures (murti) – especially Shiva and Devi, lion heads (kirttimukha), and fan shapes.

The temple was laid out on a precise plan of 16 x 16 squares, a design known as padmagarbhamandala in the Dravida architecture of southern India. The interior contains the typical passageway for worshippers to perform a circumambulation, in this case on two levels. The garbhagriha contains a 4-metre tall Shiva linga (phallus). There is a snapana platform, too, for the ritual bathing of the god located within a portico (ardhamandapa). Murals decorate the interior walls, and, once hidden by later Nayaka period paintings, these include fine images of Rajaraja I, his spiritual advisor or guru, and his three queens. Other subjects include a Nataraja (Shiva as Lord of the Dance) who was the clan deity of the Cholas (kuladevata).

Rararaja I (r. 985-1014 CE) and his son Rajendra I (r. 1012-1044 CE) both filled the temple with bronze sculpture, including images of the kings and their queens, upon which were hung precious jewellery. As indicated in inscriptions, the Cholas also paid for regular offerings of incense, food, and flowers and ensured that the temple was well-maintained by attendants and no fewer than 400 dancing girls – an increasingly important aspect of Hindu worship from that time onwards. Funds were also acquired by partitioning off the surrounding land which would be controlled by priests and the income used to upkeep the temple. Indeed, a whole community arose at the site and included accountants, merchants, and administrators, creating a model which would be copied at other Indian temple sites thereafter.

The gopuras at Thanjavur are two huge monumental gateways which lead to the compound dominated by the Brihadishvara temple. They are the earliest mature examples of the form in southern India. Built on the eastern side of the complex, the outer gopura has five stories and the inner one three. Each gopura has a centrally positioned entrance giving access to a single two-storied chamber on each side of it. The gopuras at Thanjavur are unique because each façade (interior and exterior) is not identical as in later examples. The outer facades each have two large dvarapalas (door guardians) as well as figure sculpture in their many niches and large decorative fan shapes. The top of each gopura is crowned with a massive shala or barrel-vaulted roof. Eventually at other sites gopuras would become even larger and more spectacular than the temples themselves.

Other buildings in the compound include the Nandi mandapa portico, located directly between the gopuras and the Brihadishvara temple. A later addition to the site located at the opposite end to the gopuras is the Subrahmanya Shrine, built in c. 1750 CE.

We want people all over the world to learn about history. Help us and translate this definition into another language! So far, we have translated it to: French, Turkish

Like many great civilisations, the origins of the Chola, a Tamil...
Definition

Hindu architecture evolved over the centuries from simple rock-cut...
Definition

Hinduism is the oldest religion in the world, originating in Central...
Article

A Visual Glossary of Hindu Architecture

Adisthana - the decorative raised platform on which a temple...
Image

Rajaraja I Mural, Thanjavur. The Mural, from a sanctuary wall... 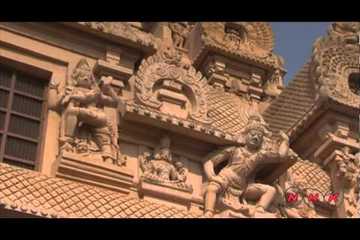 The great Temple of Tanjore (Thanjavur) was built between 1003...

Submitted by Mark Cartwright, published on 23 August 2015. The copyright holder has published this content under the following license: Creative Commons Attribution-NonCommercial-ShareAlike. This license lets others remix, tweak, and build upon this content non-commercially, as long as they credit the author and license their new creations under the identical terms. When republishing on the web a hyperlink back to the original content source URL must be included. Please note that content linked from this page may have different licensing terms.