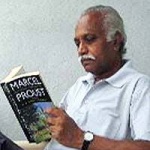 BS Murthy is an Indian novelist, playwright, short story, non-fiction 'n articles writer, translator, a 'little' thinker and a budding philosopher in ‘Addendum to Evolution: Origins of the World by Eastern Speculative Philosophy’ that was originally published in The Examined Life On-Line Philosophy Journal, Vol. 05 Issue 18, Summer 2004.
Born on 27 Aug 1948 and schooled in letter-writing, he articulated his managerial ideas in thirty-odd published articles, and later he penned Benign Flame: Saga of Love, Jewel-less Crown: Saga of Life, Crossing the Mirage: Passing through youth (plot and character driven novels), Glaring Shadow: A stream of consciousness novel, Prey on the Prowl: A Crime Novel, Of No Avail: Web of wedlock, a novella, Stories Varied: A Book of Short Stories, and Onto the Stage: Slighted Souls and other stage and radio plays.
Then entering the arena of non-fiction with a ‘novel’ narrative of Puppets of Faith: Theory of Communal Strife (A critical appraisal of Islamic faith, Indian polity ‘n more) possibly a new genre, he ventured into the zone of translations for versifying the Sanskrit epics, Vyasa’s Bhagvad-Gita (Treatise of self-help) as well as Inane Interpolations in Bhagvad-Gita (An Invocation for their Revocation) and Valmiki’s Sundara Kãnda (Hanuman’s Odyssey) in contemporary English idiom.
And in the end, as a prodigal son, he returned to his mother tongue, Telugu, the Italian of the East, to craft the short story తప్పటడుగులు (Missteps).
While his fiction had emanated from his conviction that for it to impact readers, it should be the soulful rendering of characters rooted in their native soil but not the hotchpotch of local and alien caricatures sketched on a hybrid canvas, all his body of work was borne out of his passion for writing, matched only by his love for language.
His body of work as above is in the public domain as free ebooks in umpteen sites https://g.co/kgs/bGUEqt
Besides, some of his published articles on management issues, general insurance topics, literary matters, and political affairs in The Hindu, The Economic Times, The Financial Express. The Purchase, The Insurance Times, Triveni , Boloji.com are at https://independent.academia.edu/BulusuSMurthy
BS, a graduate mechanical engineer from Birla Institute of Technology, Mesra, Ranchi, India, is a Hyderabad-based Insurance Surveyor and Loss Assessor since 1986.
He takes keen interest in politics of the day, has an ear for Carnatic and Hindustani classical music and had been a passionate Bridge player.
He's married, to a housewife, with two sons, the elder one a PhD in Finance, and the younger a Master in Engineering.

329 pageviews on this user's contributions 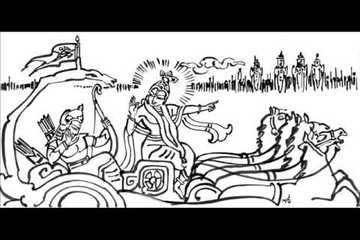 The spiritual ethos and the philosophical outlook that the Bhagvad...