Spreading the News: The American Postal System from Franklin to Morse 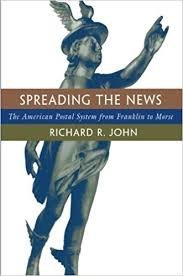 This book urges readers to reflect on the overlooked importance of the postal system. Richard John has single-handedly brought the past of the postal system to the forefront of history research. Although it focuses on the American postal system, the book allows readers from any country to think back on how postal systems have influenced the community and national identities everywhere. All historians and history enthusiasts focusing on media history should read this book.

Although it was published in 1995, Richard R. John's Spreading the News: The American Postal System from Franklin to Morse remains a must-read in the media history academia. This book practically shaped today's academic research in this genre. For lots of countries today, with instant communication methods such as the internet or radio, we often view our government-run postal systems as only a section of our daily communication. However, before Samuel Morse commercialized the telegraph in the 1840s, the postal system was the public's only medium of information.

This book looks at the American postal system from its establishment in 1775 to the commercialization of the telegraph in 1844.

Through comprehensively using primary documents and official data, this book looks at the American postal system from its establishment in 1775 to the commercialization of the telegraph in 1844. John argues that, in these seven decades, the postal system became the primary backdrop for most American domestic affairs and the building of the American national identity. Because of the country's vast terrain and internal disagreements right after its establishment, this vast machine of the postal system employed 69.1% of all U.S. federal civilian officers in 1816 to operate public communication; in 1841, 79.2% of all federal civilian officers were postal officers.

Richard John skillfully weaves the archived documents of many U.S. Postmaster Generals and government officials with U.S. legislation to prove the importance of the postal system. For example, John shows that the Post Office Act of 1792, which gave Congress primary control over postal policies and allowed newspapers to be transported at extremely low rates, is the cornerstone to building the early American national identity. John connects politicians who have different interests together through their shared goal of using the postal system to reach their people. As a result, as early as the 1830s, a poor farmer in Michigan could be as informed and educated about current affairs as a wealthy upper-class in New England. In that decade, the postal system, with 8,450 offices, transmitted "13.8 million letters and 16 million newspapers" (4). This was an unthinkable achievement for many contemporary European countries.

This book is thematically divided into seven chapters. Chapter One, titled "The Postal System as an Agent of Change," uses statistics on the early U.S. postal system to show the social, political, and national values of the postal system. Chapters Two to Four examine how these values were reached through legislation like the Post Office Act of 1792 and the various efforts of the early Postmaster Generals. Chapters Five to Seven look at how the postal system, as a significant tool to reach the people, became a battleground between politicians and different states. For instance, abolitionists used the postal system to mass-distribute anti-slavery publications into the American South. Meanwhile, a common procedure for many new presidents was to replace key postal officers with people of their own party. The two most important chapters, however, are Chapters One and Four. Both of them can act as standalone essays that cover John's main argument about the connection between the postal system and national identity.

This book includes six data tables, compiled through many government data that show the fast growth of the postal system between the 1770s and 1840s. The book's bibliography contains an extensive amount of primary sources from the personal communications of postal office clerks and political officials to pamphlets and legislation.

Richard John is currently Professor of Journalism at Columbia University. Spreading the News has inspired a wave of scholarship on postal history, and all students, researchers, and enthusiasts of the history of communications will benefit from this book, either through its information or the way it points in a new direction of looking at media history as a whole.

$19.97
plus shipping
By purchasing books through this website, you support our non-profit organization. World History Encyclopedia receives a small commission for each book sold through our affiliate partners.

The involvement of France in the American War of Independence (1775-1783...
Article

Howard Carter's 1922 CE discovery of the tomb of Tutankhamun was...
Image

Oil on slate painting by Benjamin West, c.1816. From the Philadelphia...

$19.97
plus shipping
By purchasing books through this website, you support our non-profit organization. World History Encyclopedia receives a small commission for each book sold through our affiliate partners.