The Greek Vase: Art of the Storyteller

by Kelly Macquire
published on 25 October 2021 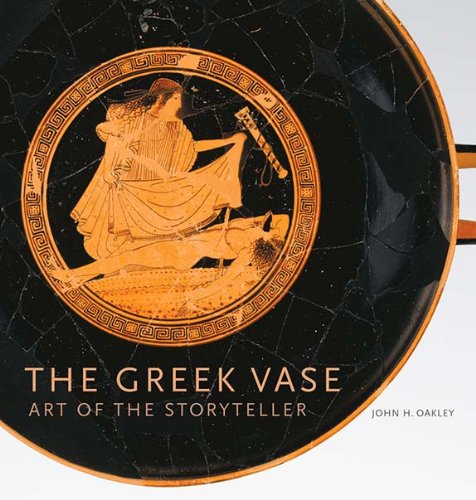 The Greek Vase: Art of the Story Teller by John H. Oakley takes the reader on a journey through the history and development of the Greek vase and Greek pottery in general. The book covers topics such as the different forms and functions of Greek pottery, the different decorative styles, the types of designs painted on them, and the makers of Greek pottery, and is full of brilliant images. I would recommend this book to any and all lovers of ancient Greece, pottery, or ancient art in general!

The Greek Vase: The Art of the Storyteller by John H. Oakley is a richly illustrated guide to everything you need to know about ancient Greek pottery. This book has images on every single page of pottery from ancient Greece, beautifully photographed and well described. This book has six main sections: Fabric, Form and Function, Potters and Painters, Depicting the Divine, Meeting the Myth Makers, A Life Well-Lived, and Seducing the Senses. These sections take you through the different forms of pottery and in what contexts they would be used. They explain in detail the main decorative forms including red-figure, black-figure, and white-ground, and the changes in preference for each of the design types.

I absolutely loved the section 'Potters and Painters' which takes you through how some potters and painters have been identified and how analysing drawing styles is not as easy as it sounds. Pottery has been traced back to the workshop in which they were manufactured, and in some instances, pottery has been inscribed with names which makes it clear it was a family skill, passed from father to son. Honestly, the detail that was put into the designs of ancient pottery, and the fact that so many have survived so well for so long absolutely blows me away. I never thought I would love ancient pottery quite this much.

One of the most fascinating points made is the fluctuation in preference for pottery designs with the political changes in Athens.

One of the most fascinating points made in 'Meeting the Myth Makers' is the fluctuation in preference for pottery designs with the political changes in Athens, which is clear in the decline of vases decorated with Hercules and his labours (which were very popular prior to 508/7 BCE), and the increase in the depiction of Theseus during Athenian democracy. The detail in which Oakley analysed the depiction of gods, goddesses, and other deities from Greek mythology was fascinating, and he posed the issue multiple times that most of the divine were depicted as humans, so pottery without the names of the figures depicted can often be analysed in multiple ways.

From mythology to everyday life like sports and Greek theatre, to weddings and funerals, the Greek vase was present in every aspect of ancient Greek life, and so much of life was depicted on them. We know so much about daily life in ancient Greece, and the Athenians specifically, from the decorative designs on pottery. The detail this book went into was an unexpected surprise, but a very happy surprise nonetheless. It truly broadened my knowledge of artistic features, function, development, and ways in which to analyse ancient Greek pottery, and the sheer number of images accompanying the text elevates it that much more.

$35.00
plus shipping
By purchasing books through this website, you support our non-profit organization. World History Encyclopedia receives a small commission for each book sold through our affiliate partners.

Black figure pottery is a type of Greek pottery named after the...
Definition

The first stage in making a pot is to dig the clay out of the ground...

$35.00
plus shipping
By purchasing books through this website, you support our non-profit organization. World History Encyclopedia receives a small commission for each book sold through our affiliate partners.