Voices of Dissent: An Essay

Running a website with millions of readers every month is expensive. Not only do we pay for our servers, but also for related services such as our content delivery network, Google Workspace, email, and much more. We would much rather spend this money on producing more free history content for the world. Thank you for your help!
$2332 / $21000
❤ Donate

by Vishwajeet Deshmukh
published on 02 December 2020 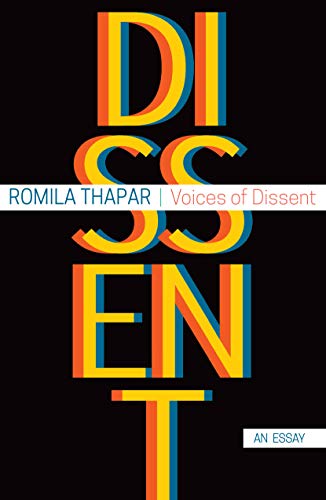 From Ancient Indian history to modern India, Romila Thapar brings an alternative perspective to an existing set of history and literature which forces readers to reconsider their views. I recommend Thapar's "DISSENT" to all South Asian History aficionados for a fresh perspective.

Romila Thapar's latest addition to the study of the ancient history of India and its presence in modern times has been elegantly translated through her book Voices of Dissent: An Essay. Romila Thapar is an Emeritus Professor at Jawaharlal Nehru University, New Delhi, and the General President of the Indian Historical Congress, and her scholarship on ancient India has been celebrated among intellectuals over several decades. Thapar acknowledges the missing chapters of history, which were silenced mainly for their nature of “dissent” - she also terms them as “The Others”-, and through this scholarship, she aims to highlight that the study of dissent is crucial to the study of the evolution of civilizations. Though the book is aimed at general enthusiasts of Indian history, it requires a rudimentary understanding of the fundamental aspects of ancient history.

Thapar's scholarship stems from two of her lectures presented in Delhi focused on dissent in Early India and the Satyagraha. The book does not have distinct chapters, but Thapar establishes transitionary links through nine distinct examples such as the son of the Dasi (Dasi-puthrah), Shramanas, otherness in Mahabharata, Bhakti Sant and Sufi Pir, sect conflicts among Hindus, and nationalistic dissenters in modern India. Thapar establishes the background of each of the examples with the popular literature and opinions of the academic community along with the sources referred to. Then she extends her understanding of the time period and society, establishing a base for social and historical analysis of the dissenters of the popular belief and explaining how the communal difference found a place in the literature of these groups over the course of time.

The articulation of dissent does not mean a violent revolution; it is a civilized discourse on disturbing questions that need answers.

The articulation of dissent does not mean a violent revolution; it is a civilized discourse on disturbing questions that need answers. Thapar establishes the foundation for the answers which remained unacknowledged and subverted deep within the missing chapters of history. What stands out here is not an alternative interpretation of the documents but an alternative perspective to the established interpretations. Thapar's experience at the Shaheen Bagh Protest is the climax of this attempt reaching the focal point of the past and present, as there were no differences in the time.

A similar study of ancient Indian dissent is India Dissents: 3,000 Years of Difference, Doubt and Argument by Ashok Vajpeyi, but Thapar links the historical dissenters to the present-day demonstrations of protests. Voices of Dissent is a thought-provoking book attempting to provide a new perspective to history, archives, and the veracity of several established subjects. The 154-page essay is a fresh perspective towards ancient Indian history, which makes us question whether these dissenters have been misunderstood. I strongly recommend this book to all history enthusiasts willing to question their understanding of the past.

$19.34
free shipping worldwide
$19.00
plus shipping
By purchasing books through this website, you support our non-profit organization. World History Encyclopedia receives a small commission for each book sold through our affiliate partners.

Vishwajeet Deshmukh
Vishwajeet Deshmukh is a law student at Government Law College, Mumbai. His area of research is &quot;South Asian Legal History&quot; and &quot;Anglo-Indians Studies&quot;. He is an editor at Bologna Law Review, Italy, and JURIST, Pittsbur

The Vedas are the religious texts which inform the religion of...
Definition

Hinduism is the oldest religion in the world, originating in Central...

$19.34
free shipping worldwide
$19.00
plus shipping
By purchasing books through this website, you support our non-profit organization. World History Encyclopedia receives a small commission for each book sold through our affiliate partners.