Introducing the Ancient Greeks: From Bronze Age Seafarers to Navigators of the Western Mind 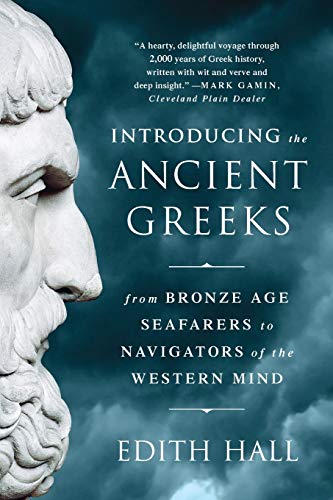 In this fascinating and elegantly written book, Edith Hall explores the key characteristics that set the Ancient Greeks apart and how they coped with their changing world. From the original seafaring Mycenaeans to the destruction of Paganism under the Christian Roman emperors, this is a fantastic introduction to the world of the Greeks which will leave the reader itching to know more.

Edith Hall has a very interesting approach to providing an overview of Ancient Greek history and culture. Rather than a simple linear narrative, Hall presents the reader with something altogether more playful. In her Introduction, she sets out ten key characteristics of the Ancient Greeks, through which she intends to interpret and explore the world they created. These include being seagoing, suspicious of authority, competitive, inquiring, and addicted to pleasure. Sceptical readers may worry that such subjective labels are a rather unscientific way to examine a group of people, but as the book progresses Hall repeatedly qualifies her uses of these terms and uses them to excellent narrative effect. They operate almost as a leitmotif to which the rambling history of Ancient Greece can be drawn back. By using fluid terms, like 'individualistic', Hall gives herself enough scope to encompass the amazing variation between different Greek communities whilst also showing how they can be understood as a whole group.

The book is structured in roughly chronological order, starting with the bronze age communities of Greece and ending with the outlawing of pagan practices by the Roman Emperor Theodosius I. Within each chapter (which cover broad periods of Greek history), Hall gives herself the licence to roam, following the dictates of her material and the trends she is identifying within it. Several chapters overlap in terms of the dates they cover, particularly the last two that focus on Greek intellectual life under the Romans and the rise of Christianity. Hall shows how Greek culture grew, providing a sense of different ideas building momentum over time, such as the development of different schools of philosophy in Athens. The progress of the chapters feels completely natural and sucks you into the argument.

One particularly absorbing chapter is the one focusing on Sparta. The popular image of men in red cloaks and leather hot pants plays a big part in Sparta's fascination, but Hall delves far beyond this. She explores, with great candour, the darker side of Spartan society, whilst also tearing down the idea that they were austere warriors with no time for culture or art. These most un-Greek of Greeks are transformed by Hall's analysis, and she makes a great case for how we can see their society in context with that of Athens.

The only possible criticism I can level at this book is that Hall can be a bit of a tease. Although she describes some ancient works in great detail (such as Galen's treatises), frequently, she will name drop an author or the contents of a specific ancient text and then move on to other things, making your mouth water to know more. But perhaps this is a good thing – if you are only just starting to explore the ancient world, it is very useful to get an idea of what texts you might want to look at, without any 'spoilers'. It gives you the freedom to look at those texts with your own fresh perspective. In addition, Hall is very good at situating well-known authors in context. Most people will have heard of Plutarch, but fewer will know about his devotion to his hometown, Chaeronea, in Boeotia.

I would recommend this book to both newcomers and more seasoned researchers. The overview is very thorough and will give those unfamiliar with the material a great appreciation for the progress of Greek civilisation. Although the content will be familiar to those who have studied the ancient world for years, Edith Hall's approach may be interesting for the experienced Classicist to engage with.

$18.61
free shipping worldwide
$13.89
plus shipping
By purchasing books through this website, you support our non-profit organization. World History Encyclopedia receives a small commission for each book sold through our affiliate partners.

Sparta was one of the most important city-states in ancient Greece...
Definition

The Greek Dark Age is the interval between the collapse of the...

Sahu, J. (2017, May 17). Introducing the Ancient Greeks: From Bronze Age Seafarers to Navigators of the Western Mind. World History Encyclopedia. Retrieved from https://www.worldhistory.org/review/163/introducing-the-ancient-greeks-from-bronze-age-sea/

$18.61
free shipping worldwide
$13.89
plus shipping
By purchasing books through this website, you support our non-profit organization. World History Encyclopedia receives a small commission for each book sold through our affiliate partners.